Warning... very old post with very bad pictures lies ahead... proceed with caution!  But  if you can get past that... you may learn something if you're new to caking!

So, today I'm not posting a lot because I'm busy making my son Joshua's birthday cake.  He drew a picture of what he wants his cake to look like...and this is it: 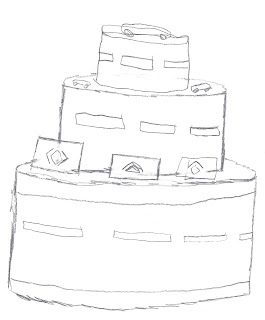 This cake is somewhat based on his new PS3 game, "Blur".  I'm not a gamer, but this is a super-cool fun racing game, or so I'm told.  In the spirit of that, he wants the "background" color to be green and then he wants there to be roads going around it.

He picked out Hot Wheels cars to go on the tiers and those little squares on the second tier are "boosts" in the game (don't ask me...I'm just the cook).

So, the only major change I'm making is that his cake is only going to be 2 tiers.  His party is not going to be that big and we don't need that much cake!

So yesterday I baked the cakes, (2) 10" layers and (2) 6" layers.  I used this recipe (which is by and far my favorite recipe for tiered cakes), except we used Pillsbury Funfetti mix instead of white cake mix.  Funfetti is an addition with my kids and my (adult) brothers, so it turns up at a lot of family birthdays!

Here's what I started with this morning...I baked them yesterday, wrapped them in plastic wrap and let them sit overnight.  This morning I unwrapped them and they're ready to go! 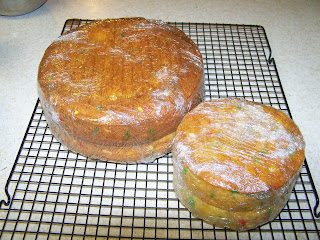 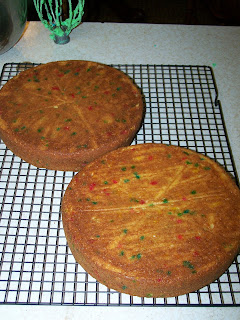 I also whipped up a triple batch of buttercream this morning and  tinted it green... 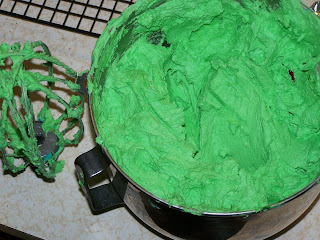 So, my first step in building this cake is layering the 2 tiers.  I don't know how popular this technique is, but I'm telling you, if you're building a BIG cake, this is a crucial step!!  I got the idea from a Sharon Zambito video.   Although I don't do it exactly like she does, I highly recommend any of her videos for learning the ins and outs of cake decorating!  I have 4 of them and they are fabulous!

So, take a cup or so of your icing (more depending on how big your cake is) and separate it from the rest. 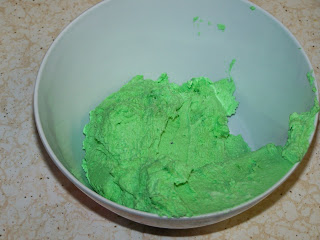 Then add extra powdered sugar to it.  I don't measure, I just keep mixing it until I get an almost Play-Doh texture... 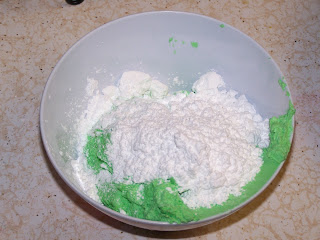 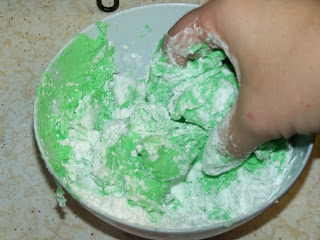 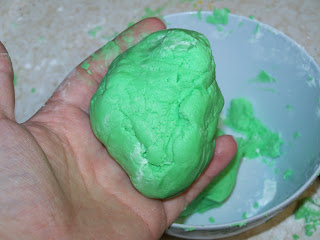 Now this icing is STIFF.  But, you'll see why that's a good thing in a minute.  Next, I put this stiff icing into an icing bag with only a coupler (ignore my stained icing bags...I've had them for 15+ years so they're very worn but still work great). 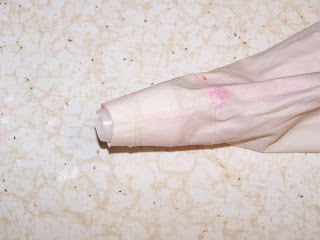 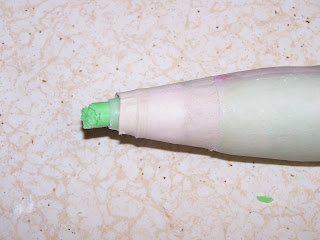 It would be best if I had a coupler that was not notched, but all of mine are notched and it's not a big deal.  Anyway put your icing in the bag, then squeeze it out into a "wall" around the outer edge of the bottom layer of cake...does that make sense?  It'll look like this when you're done... 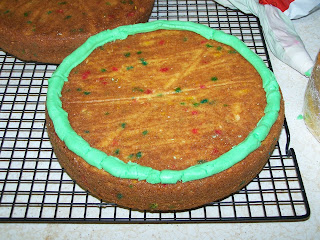 I do this to prevent the softer filling icing from "squeezing out" when I set the next layer on top of it.  This cake is necessarily dense and heavy so that it'll hold the weight of the fondant.  For that reason, it'll easily bulge out around the edges of the layers if you don't put a "wall" there to help hold it up.

So, after I get a ring of really stiff icing on the edges, I fill the inside with the regular buttercream.  If you wanted, you could use a fruit filling or some other flavor inside, but for this cake, I'm just using buttercream... 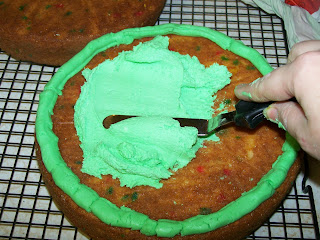 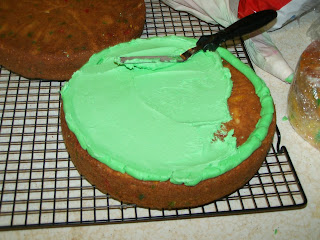 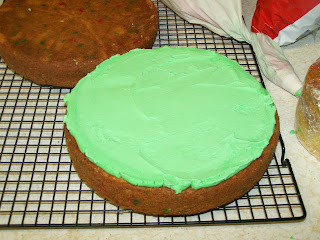 When that's done, you can just stack the next layer on top! 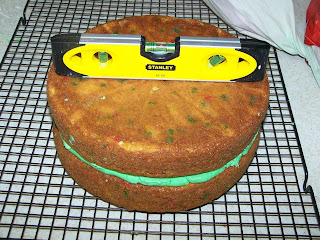 The level is there because I wanted to make sure it was level so far, and it was.  At this point, you'll want to let your cakes sit and settle for a few hours or overnight.  I'll show you why in my next post...coming later today if I don't get too far behind on my other birthday party prepping and cake decorating!

To see the rest of my step-by-steps... check out these posts:

Any questions about this cake?  Leave them in the comments and if you make one like it, I’d love to see the pics!!

One or more links in this post are referral or affiliate links.  Read my disclosure policy here.