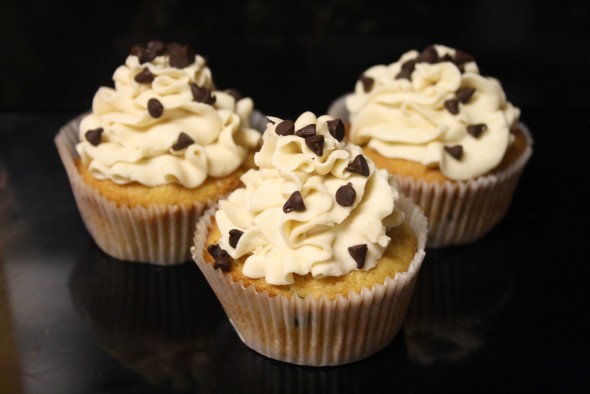 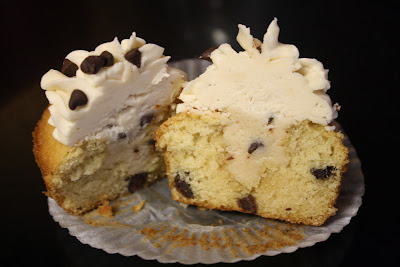 I saw this recipe back in January but wasn't quite recovered from having the baby to dive into this kind of baking challenge.  So, I've waited...and waited... and finally I had a Saturday morning with no plans.

Last night I decided that when I woke up today, I'd make the cupcakes and take them to our annual Chitterling Supper at church.  If you don't know what that is ... don't ask.  Trust me.

The Atwater family will be eating the alternative : grilled chicken and burgers.  In fact, I shouldn't even mention chitterlings in the same post as these cupcakes... 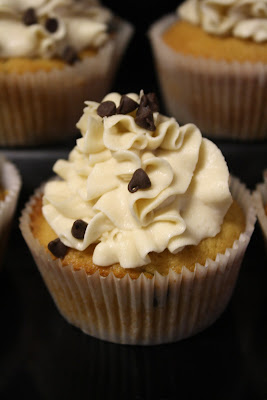 Anyway, so here's the recipe.  This is not a simple fast recipe, like I usually prefer.  It has quite a few steps and ingredients... and requires some patience, but let me tell you, it's very worth it!

These are delicious!  The Brown Sugar Cookie Dough Frosting alone is so good it's worth a whole day of baking to get a bite of that stuff!

In fact, I had to really fight the urge to ditch the cupcakes, take the bowl of icing with a big spoon, and go hide in a closet.  Did I just say that out loud?

Here's my detailed opinion of these.  Overall these are some of the best cupcakes I've ever had.  I mean, when they're called "Chocolate Chip Cookie Dough Cupcakes", could they really be bad?  I don't think so!  I mean, look at these babies...

More specifically, that is THE best frosting I've ever had.  Did I already mention that?  I liked the cake and filling, but the frosting was the silver lining... or rather the super, delicious "icing on the cake" (forgive the pun...I know I'm not that funny!).

The cake itself was a little dry and crumbly when I ate a plain cupcake.  It needed more moisture in my opinion, but with the filling and frosting, that "flaw" wasn't very noticeable.

The filling was my least favorite part, when tasted alone.  It wasn't bad... I mean, read the ingredients and you know that, but it just wasn't spot on.  I can't put my finger on what was wrong, but it needed something.  Again though - when it's in the cupcake and has frosting on top - it's not something I notice.  It certainly wasn't a deal breaker for a cupcake this good!

Overall - you should make these.  As soon as possible.  Seriously.  Unless you're on a diet, then don't.  Did anyone count how many sticks of butter were used?   You don't want to know.

Do you have any questions about these cupcakes?  Ask me in the comments!