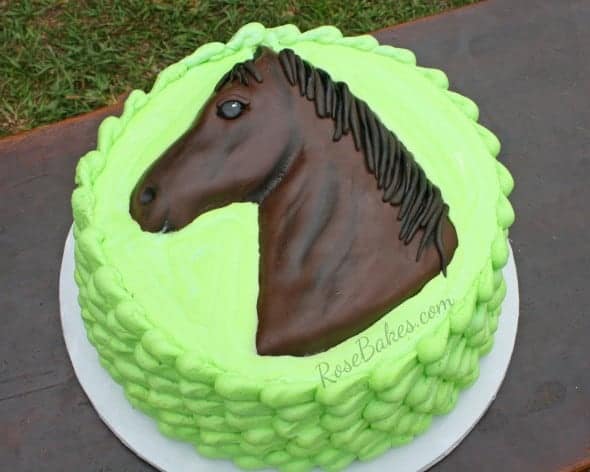 But really… it’s Friday and I’ve had a long week and I’m really wanting to get out of “work” mode and into “3 day weekend” mode so I didn’t exactly spend a lot of time trying to come up with a better name… forgive me?

All of that aside, this cake was special because it was for Ashley’s husband Lee … and she’s one of my best friends.  She (and her husband and daughter) probably love horses more than anybody I know and I really wanted to do a good job on this cake. 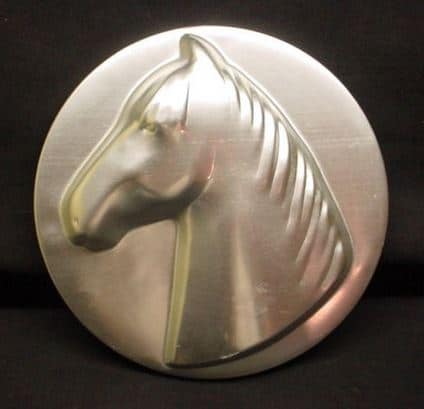 In fact, I bought this vintage Wilson horse head pan months before I actually used it because when I saw it on eBay, the first thing I thought it, “I’ve got to buy this to make a cake for Adriana (Ashley’s daughter).”

I’ve done cakes for her birthday before and they all have the same theme… there was this Cowgirl Horse Cake (one of the very first cakes I did – be warned about the poor photography) and then this Horse in a Barn Cake.  That little girl loves horses!!

Anyway… but this cake wasn’t for her.  I digress.  This was Lee’s cake. 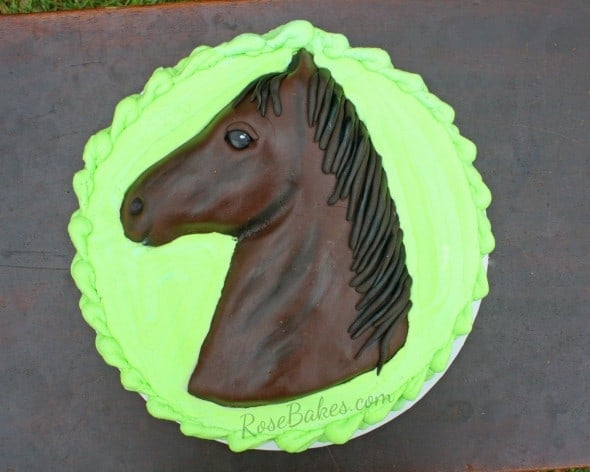 So I baked the cakes… they were 9″ round vanilla cakes. I also baked a layer with the horse head pan.  I think filled and frosted the whole thing with chocolate buttercream – then decorated the horse head with dark chocolate brown fondant and a little bit of black fondant.

After all of that was finished…. I added the vanilla buttercream on the outside.  I may have dreamed that part about the chocolate on the inside… I know Lee loves chocolate frosting with yellow cake, but now that I’m writing this up, I can’t remember if I did that.  Or if I just planned to do that.  Yes, I’m crazy, thank you for asking. 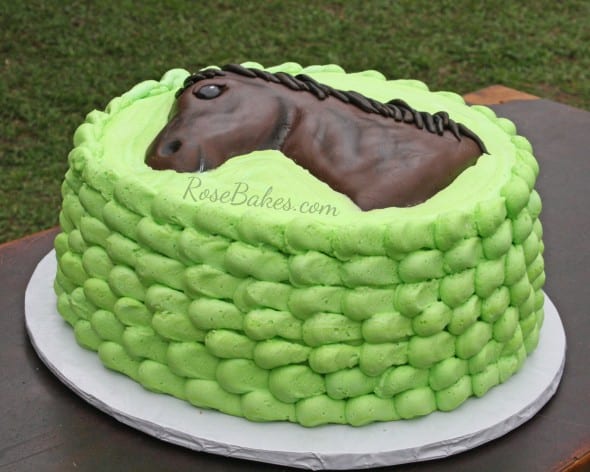 Since horses live in pastures – I made the outside green.  When I took the cake to Ashley, she was so excited – asking if I knew that that was Lee’s favorite color or if I knew that he had lime green on some of his horse gear (don’t laugh… is it called tack? horse stuff?  I don’t know).   Ashley is shaking her head in shame if she’s reading this 😉

Anyway, so I used a large round tip to do the buttercream on the sides.  I figured roses might be inappropriate for a man’s cake but I didn’t want to do it plain either, so I did this pattern and I really liked it all put together.

And that’s it… do you have any questions about this cake?  I love to hear from readers so leave me a comment!