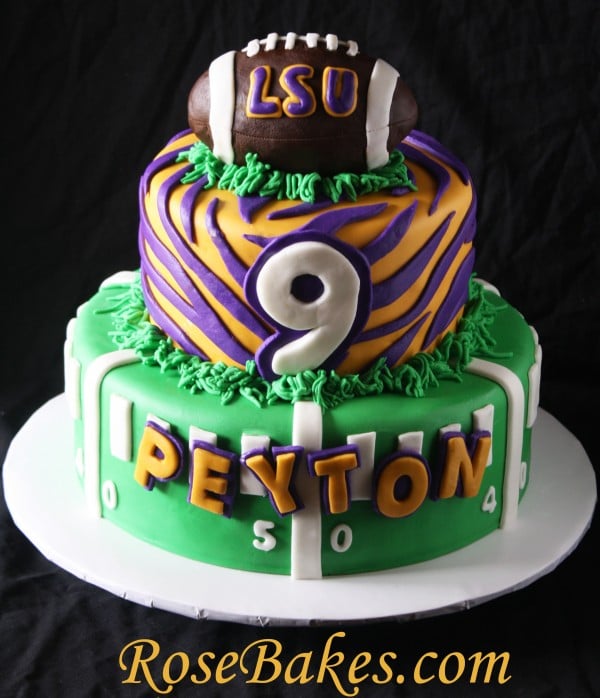 While this cake was not Super Bowl themed... it was football themed and the party happened Super Bowl weekend!    Peyton is a sports-loving little boy who was trying to choose between New York Giants cake (his favorite NFL team who happed to WIN the Super Bowl) versus his favorite college team.  In the end, LSU is what he chose for his theme!

I have to tell you though... I had a close call on this cake.  My kids have never really messed with my cakes.  I leave them out all the time and they just don't bother them.   I've never had one dropped or knocked off or damaged really in any significant way.   I guess part of that has to do with the fact that I really only started doing this a couple of years ago and at that time, my youngest was 3 years old Christian... and he was old enough to understand and obey...

Well, until Asher.  He's just learned to walk, and more importantly, learned to climb.  So, when I finished this cake last Friday night, I left it on the table, out of the way, and I thought, out of reach.  I was wrong!

I stayed up until nearly 3am the night I finished it and consequently overslept the next morning.  At some point while I slept, my daughter Sarah got Asher out of his crib (she's a great caretaker!).  I have no idea exactly the sequence of events, but she came tearing into my bedroom, "Mommy, Mommy!  Asher messed up the cake!!!"

I bolted out of the bed to find this...

Whew... I was upset, but so relieved that that was the total damage done.  In my mind, I was seeing a cake with huge handful or bite missing (he likes to bite into cakes!!), or worse a cake on the floor.  But apparently, he had only stood up on his tiny tippy toes and reached as far as he could.. and just pulled off some letters and marker lines (and ate them... his teeth were purple!).

It didn't take much work to clean up the mess and redo the letters, but man, oh  man, was that a close call - I just imagine all the things he could have done and I shutter!

Anyway... needless to say, I will not be leaving any more cakes sitting out anywhere that he can find them!!  Okay, on with the cake...

Peyton wanted a football on top of his LSU cake, so I opted to make one out of rice cereal treats.  My hubby shaped it for me (I have such great helpers!) and then I covered it in melted chocolate almond bark.  After it had set, I smoothed with my hands, then used a peeler to shave off any high spots.  After it was a smooth as I wanted, I covered it in dark chocolate fondant. 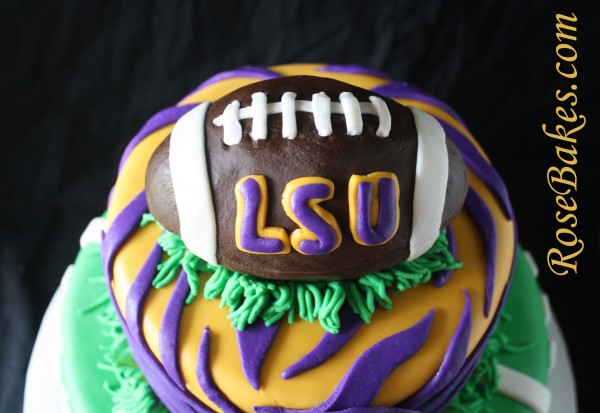 I added some texture by pressing a clean kitchen towel all over the surface, then I used the stitching tool from the Wilton Gum Paste tools set to make the stitching around the ball.  I used my FMM ribbon cutter for the white lines and lacing on the ball, and the ball tool from the gum paste tools set  to push the ends of the laces into the fondant.  The letters were cut with these Ateco Alphabet cutters, then I just traced around them to back the letters with gold. 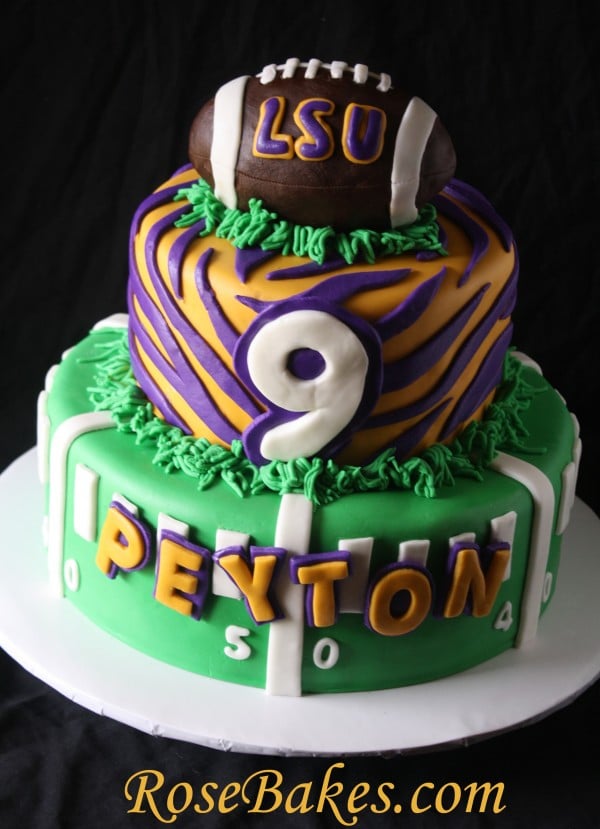 The grass was made using my favorite Makin Clay Extruder and very warm fondant!  I cut the letters for his name using 1.5" plastic letter cutters and again just traced around them to back them with the purple!   For the numbers on the "football field", I used these smaller Wilton Alphabet cutters and a ribbon maker to make the hash lines. 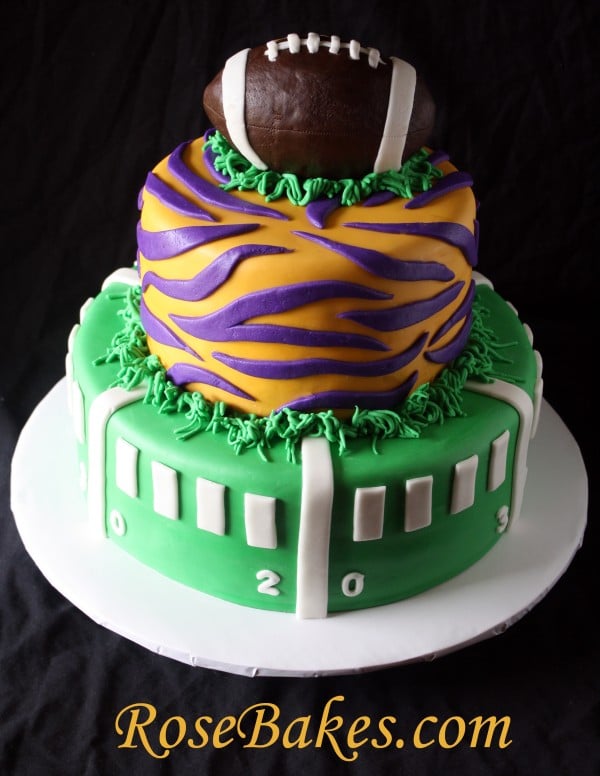 I did that, and the tiger stripes, all the way around the cake!  This cake was made with 8″ and 12″ round pans.  It was all vanilla cake with vanilla buttercream and all decorations were homemade marshmallow fondant… well, except the brown.  I use Satin Ice Dark Chocolate Brown fondant for that – it’s SO yummy – it tastes like a brownie!  Yummy!!  To get the other colors I used Americolor gel colors:  Regal Purple, Gold (with some Golden Yellow) and Leaf Green for the field!

Did I miss anything?  If you have questions about how to make this cake, please leave them in the comments!!

One or more links in this post are referral and/or affiliate links.  Read my disclosure policy here.