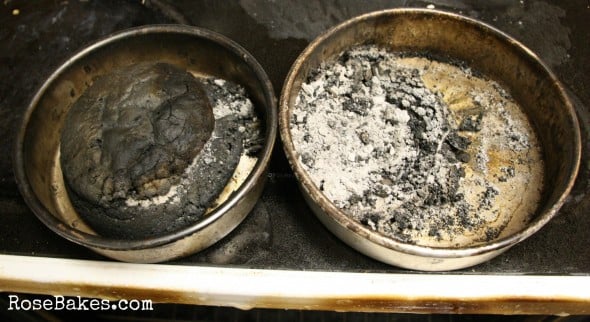 Yes, they caught on fire.  Burned to a crisp.  Turned to ashes.

Can you see the soot along the front of the oven?  That’s from smoke boiling out for hours!

This was a first for me!

So here’s what happened.  Last night I was baking – trying out some new recipes and working on some cakes.  I had two cakes in the oven and we sat down to eat our (frozen pizza) supper and watch a Christmas movie.

Then we see smoke in the kitchen.  I have two ovens (one regular range and one wall oven) and we had more pizza in the second one, so we thought somehow a piece of the pizza had fallen through the rack and was burning.

But no – the smoke was boiling out of the oven with cakes.

It took a minute for us to process what was going on – but we quickly realized the oven with cakes had somehow malfunctioned and it was in self-clean mode.

The door had locked on it and it had heated up to “clean” temperature (whatever that is… it’s HOT) – apparently getting so hot that it had caught the cakes ON FIRE.

Not smoldering or just smoking – but we could see flames through the oven door!

Next – Richy (my hubby)  ran and turned the breaker off.   He waited a few minutes, hoping it would reset (or something) and we could open the door and get the cakes out or spray them down with our fire extinguisher.

As soon as the power was back on, it went right back into self-clean mode – door locked – cakes still on fire.

At this point, so much smoke had boiled into our house that we couldn’t see/breathe.  We got the kids into the back of the house and shut the hall door, then we opened all windows and doors.

If you’re here in Mississippi, you know it was cold last night – very, very cold for us.  Less than 40°F.   Not a good temp to have your house wide open!

Anyway, when Richy exhausted all options and the breaker was off again, he finally just pulled the oven out, cut the wires and drug it out into the yard… still locked and still boiling smoke!

It took a couple of hours for all the smoke to clear from our house – and when we went to bed, the oven was still smoking out in the yard.

This morning my Daddy came over (he’s an electrician) and fixed the wires and hooked the oven back up to try and get it to open – it did… and well, you see the cakes we found inside.

They were crispy… to say the least!  HA!

In the meantime, I’m back to baking in one tiny wall oven.

I called Whirlpool this morning and they were super nice.  They’re sending out a service technician to check out the one that malfunctioned and see if it can be fixed or if it needs to be ditched.

Right now, after that fiasco, I’d be a little scared to use it anyway, but I guess if it can be fixed, then we’ll go from there!

What a week!!  I told you Monday that I had a bad day… then all of this happened last night (Tuesday)… I wonder what the rest of today holds!!