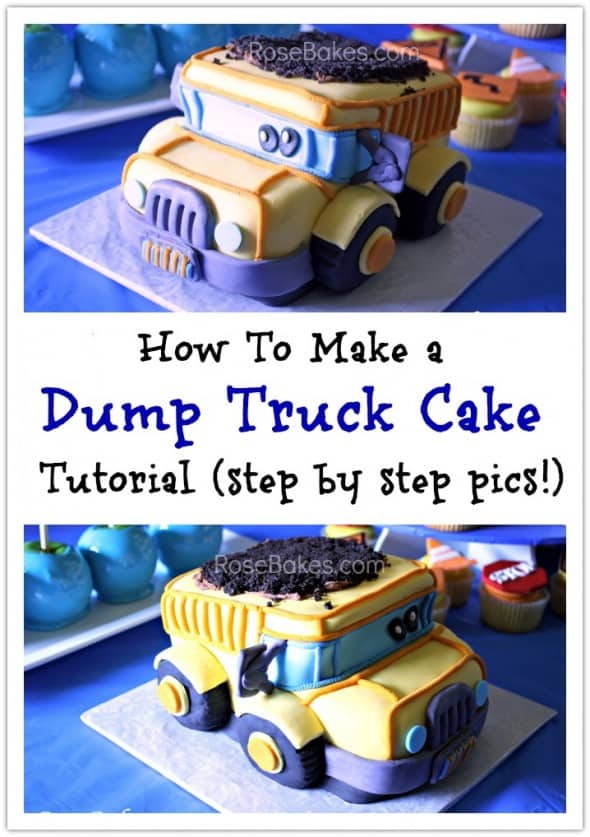 Okay, so I rarely get a tutorial post up this quickly, but since I had some extra time and this won't need to be a long post (famous last words), I thought I'd go ahead and get this How to Carve a 3D Dump Truck Cake Tutorial now!

I don't have pics of all the details (sorry), but I can give you a general idea of how to get this shape.   See all the pictures and other goodies from the Construction Pals Party here. 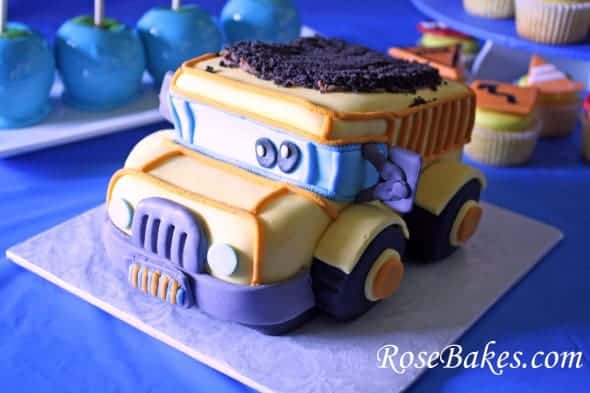 And as for the background - well, I'm just keeping it real.  My kitchen was a total disaster during this carving.   Remember, I was doing a huge amount of cakes that weekend!  I barely had counter space to do the work... I'm just sayin'.

I know it's crazy that I don't remember this, but I started with a 9"x13" sheet cake or maybe it was cake baked in this Alphabet pan.  Any rectangle cake pan would work - you may just end up with slightly different proportions.

Anyway, It was my typical vanilla cake recipe.  I then cut it into thirds... like this: 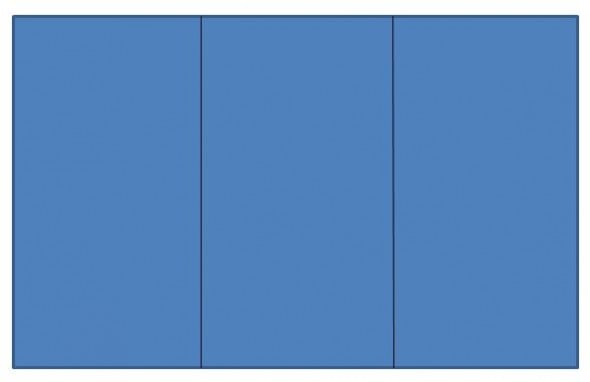 Once it was cut up into the 3 rectangles, I cut about 3" off of one of the pieces... on the short side, then I stacked it up, with only a thin layer of vanilla buttercream in between each layer, just to help it stick!

This is what it looked like now, with the short piece on top: 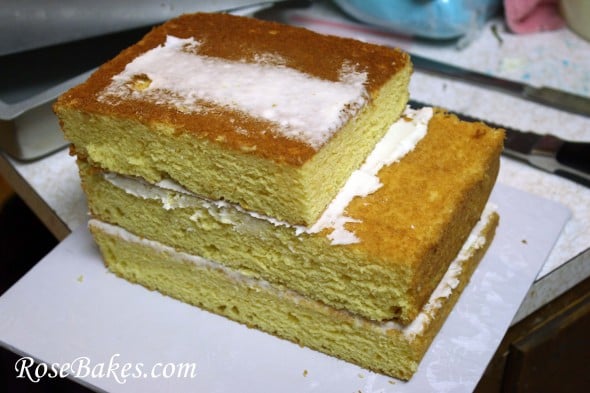 After that, I cut out a little notch in the top layer, where the windshield would go.  You can see that in this side shot: 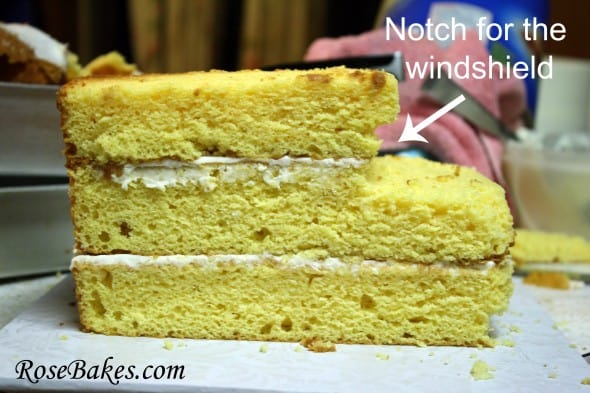 And I also cut a notch to make the bumper stand out on the bottom... and I carved some of the top so it would be slanted  (lower at the back of the truck than at the front... it's easier to see in the frosted picture). 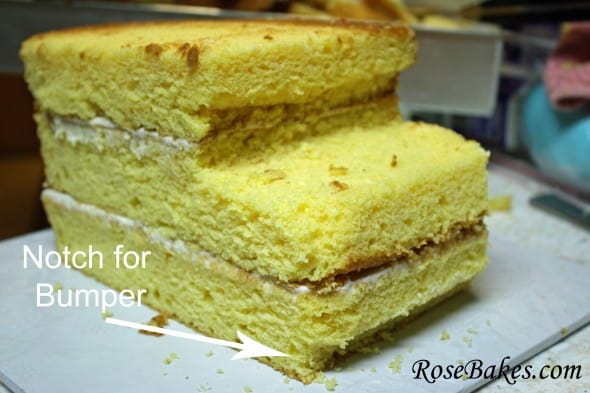 Then I froze it for awhile, so the cake wouldn't tear (no pic of that)... and when it was good and solid, I covered it in buttercream: 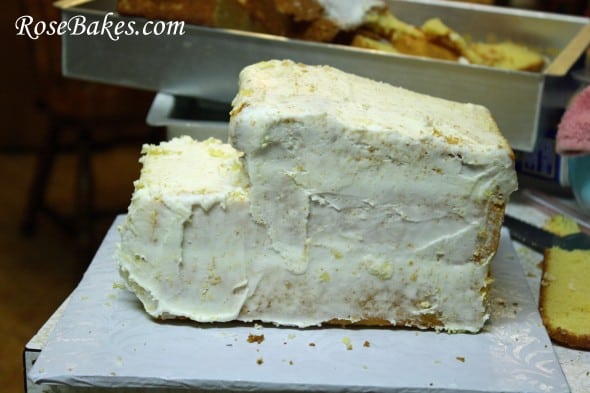 See how it's lower in the back?  Then I froze it again for a little while... and covered it in yellow homemade marshmallow fondant: 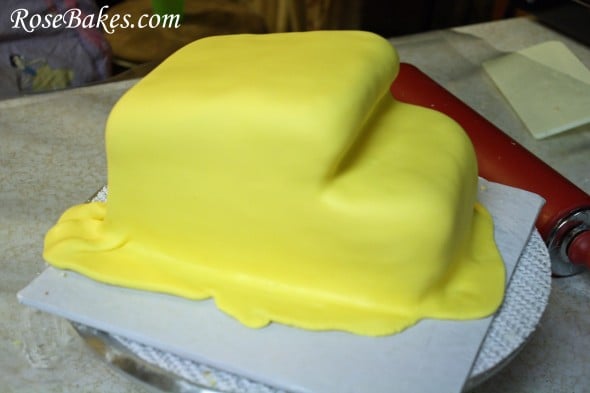 And that's that - my last photo.  I know, I totally suck for not finishing the pics, but honestly it was about 2am when I got to this point and I just wanted to finish and sleep... so I forgot to pick my camera up again.

But I can tell you... I cut a long strip of black vanilla fondant and wrapped it all the way around the bottom. to create the illusion of "under" the truck.

Then I cut out the bumper and grill and the windshield and glued those on with sugar glue.

To finish it all, I used my extruder to make tiny yellow/orange and blue strings of fondant for all the trip work.   You can see how much I love my extruder here.  And the other details were cut with an Xacto blade and glued on.

For the tires, I rolled out some rice cereal treats about an inch thick, cut 4 circles out with a cookie cutter, then covered them all in black vanilla fondant, for the tires.  You could also use donuts like I did for the tractor cake here.

I used gray fondant, mixed with Tylose, to make the mirrors, and I put toothpicks in the brackets so they'd stand off the truck and look real(ish).

I smeared the top of it with chocolate buttercream and then used Oreo crumbs for the dirt. 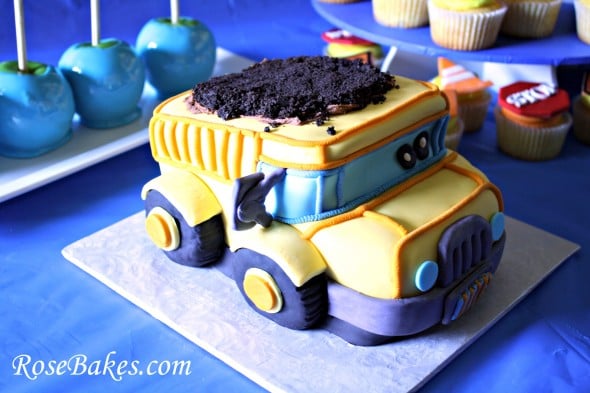 I truly hate it that I didn't finish out the photos.  I was so very tired.

But if you're reading this and something doesn't make sense - leave me a comment and I'll try to clear it up!   I love to hear from readers 🙂