With the new Despicable Me movie out, I started thinking about re-sharing (on social media) some of my old Minion posts.  When going through them, I realized I never posted a a tutorial for How to Make Minion Cupcake Toppers.

That wouldn't be a big deal except I shot this tutorial back in 2014.  Ya'll.  I've had it sitting on a hard drive for 3 years.  What in the world?!  Anyway, it took me a few days to finally get all the pictures edited and now I have a tutorial for you. 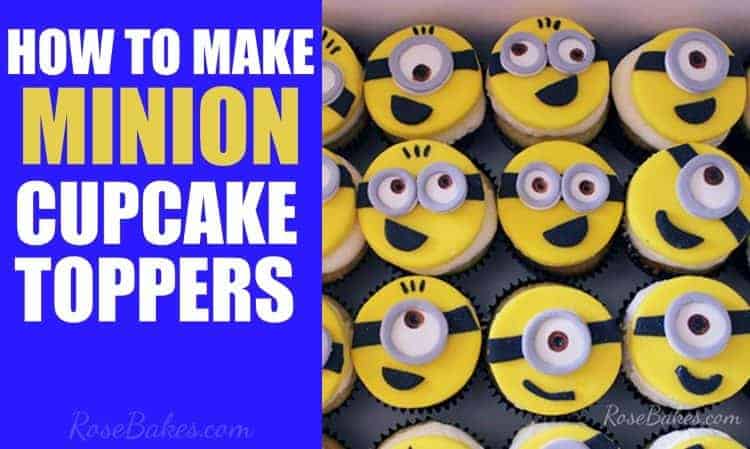 So here we go.. How to Make Minion Cupcake Toppers.

Here are the supplies you'll need to make these cucpake toppers:

Once you have everything together, let's get started!

How to Make Minion Cupcake Toppers 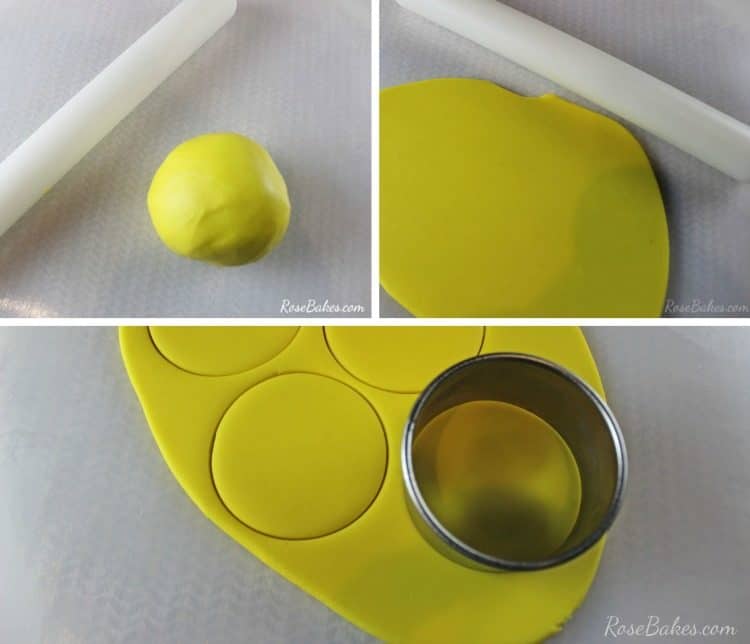 Start by rolling out your fondant to 2-3mm thick.  Then cut out 2" round circles. 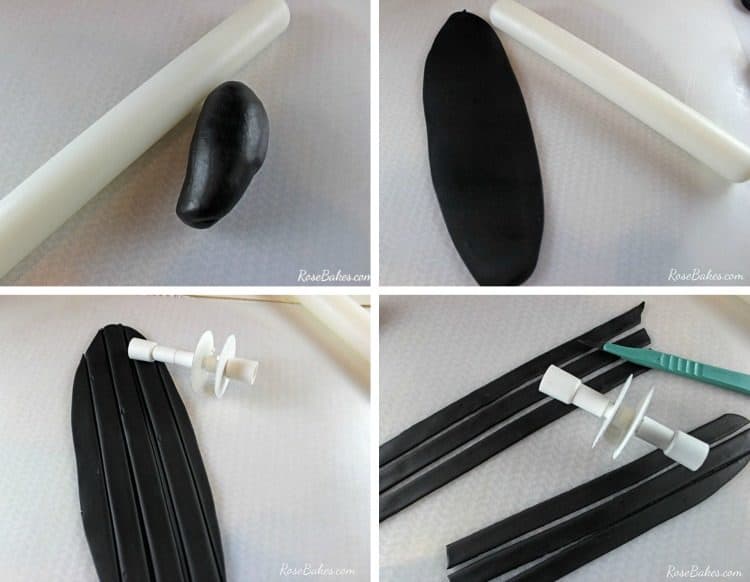 Next roll out the black fondant, then use your ribbon cutter to roll it into strips, slightly less than half an inch thick. 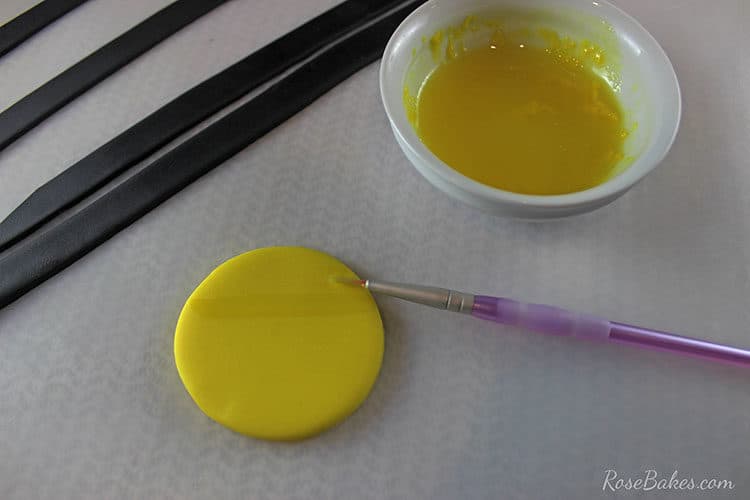 Using a tiny bit of sugar glue, attach a black strip to the yellow fondant, then trim the edges.  I used a disposable scalpel - one of my favorite tools these days! 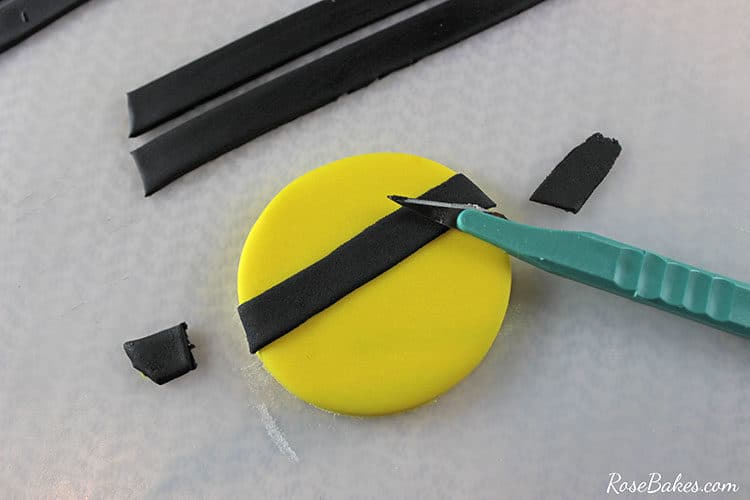 Now it's tiem to add the eyes and other details.  These will vary depending on which faces you want to make, but here are the tools I used: 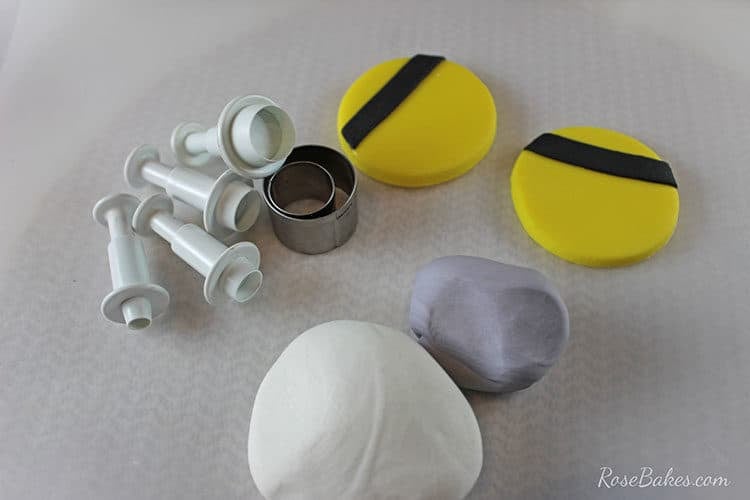 I used white and gray fondant plus some mini round cutters, the back-end of some large piping tips (not pictured above) and these circle plunger cutters. 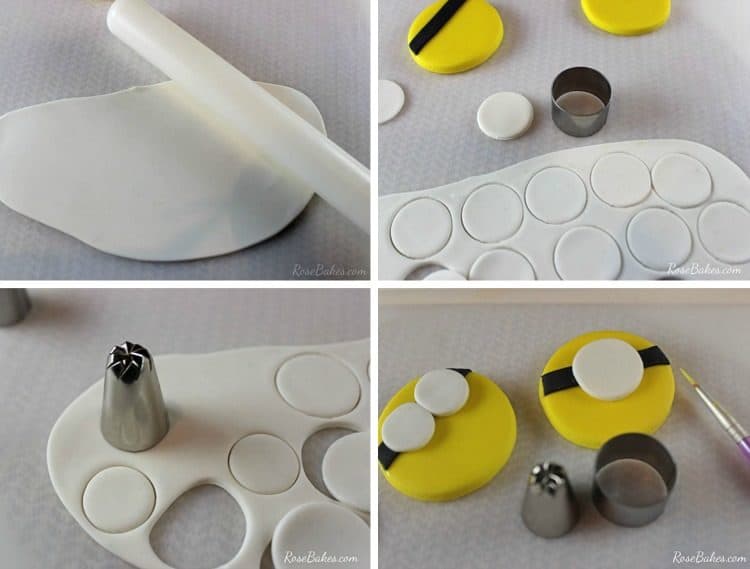 To make the eyes, just roll out the white, cut out the different sizes you need and use sugar glue to attach them to the black stripe.  I made some with one large eye and some with two smaller eyes. 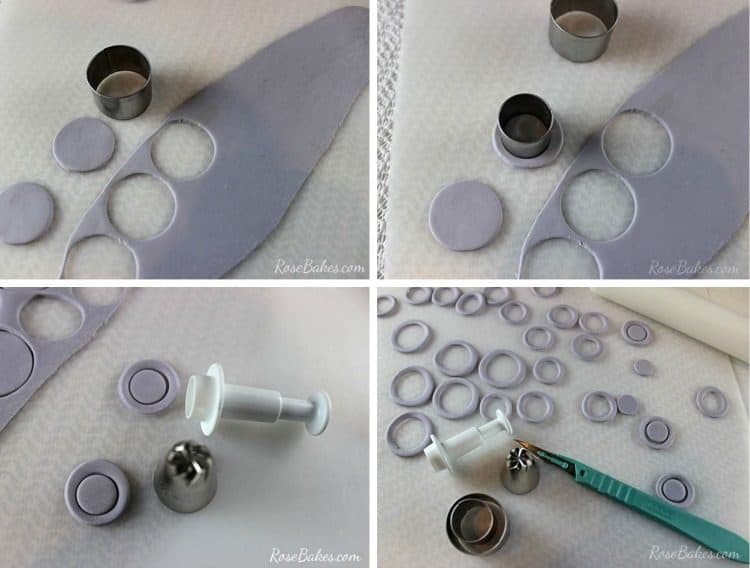 To make the googles, roll out the gray fondant.  Then use the same size cutters as the eyes you need to cover, cut out some gray circle.s  Then  use smaller circles to cut out the centers. 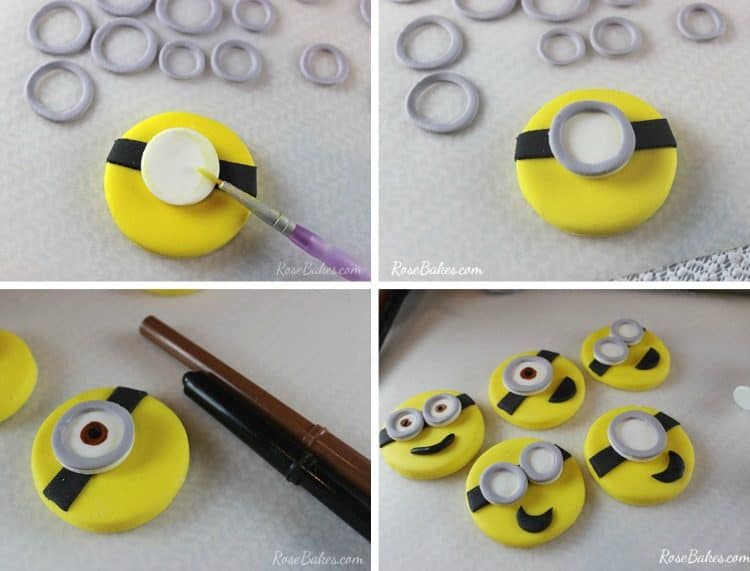 Use sugar glue again to attach the goggles to the eyes.  Once they're attached, use food markers to draw on the pupils and irises.  I used brown and black but you could also use green and/or blue for the irises. 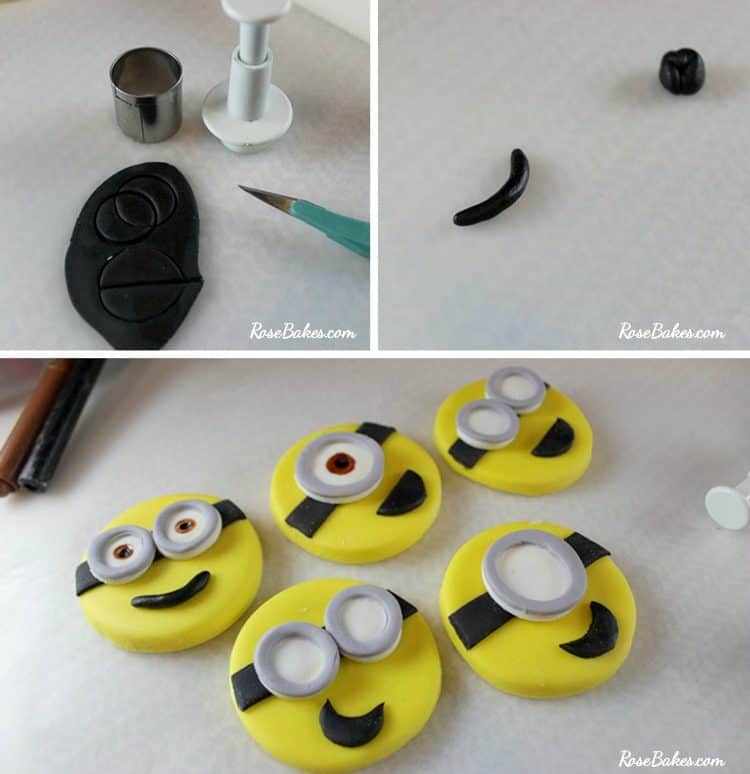 For the mouths, you can get creative.  I did some with tiny circle cutters and others by rolling out tiny snakes of black fondant.  So many different faces and personalities can be made by mixing and mathcing eyes and mouths. 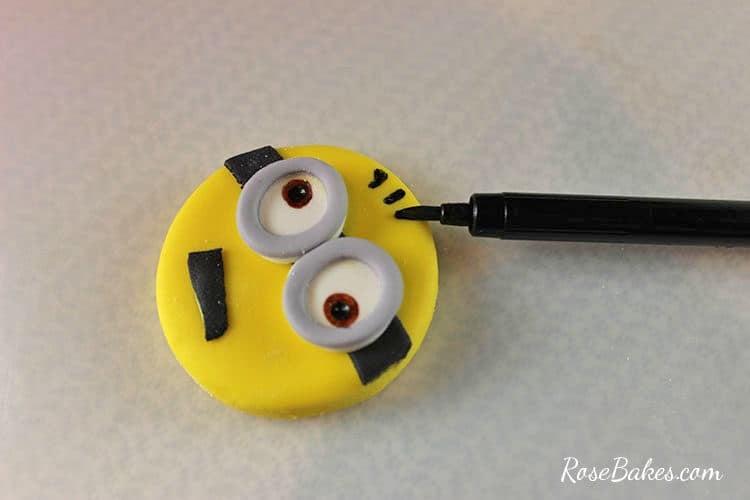 The last tiny detail I added was some hair on a few of the Minions and then I was done!  I used a black food marker but you could also use tiny snakes of fondant and sugar glue if you like. 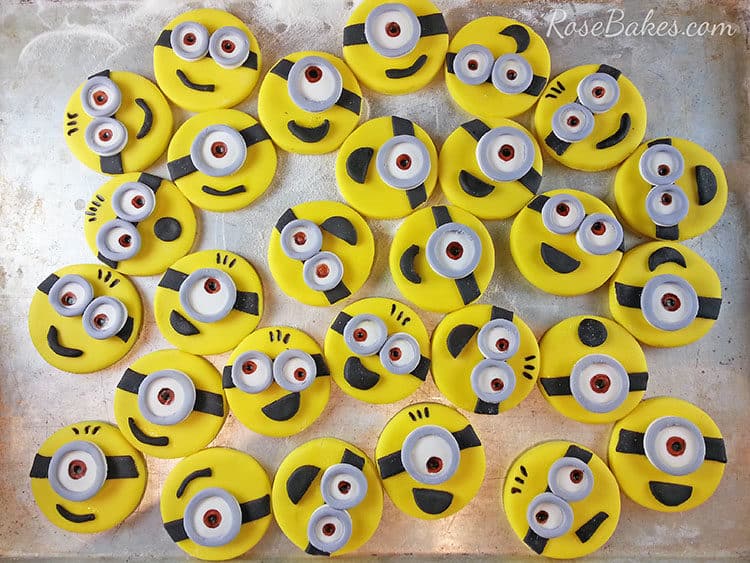 Last step... I spread them out on a cookie sheet dusted with some tylose powder and let them dry overnight.  That way they will stiffen up and hold their shape once they're placed on the buttercream on the cupcakes! 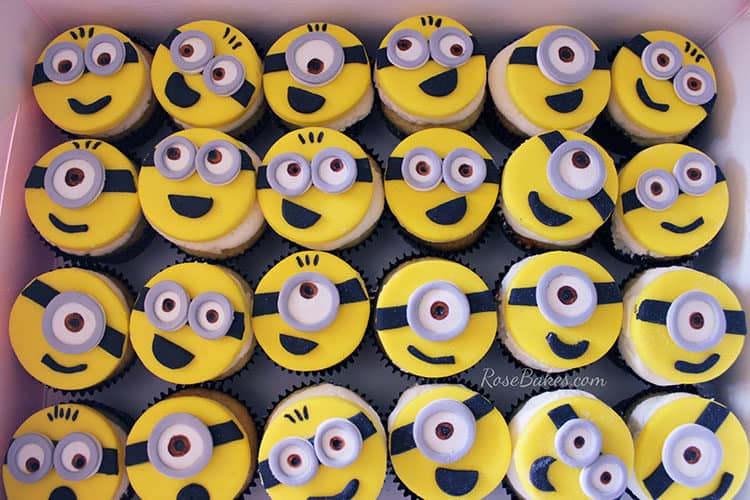 Do you have any questions about How to Make Minion Cupcake Toppers?  Leave me a comment! 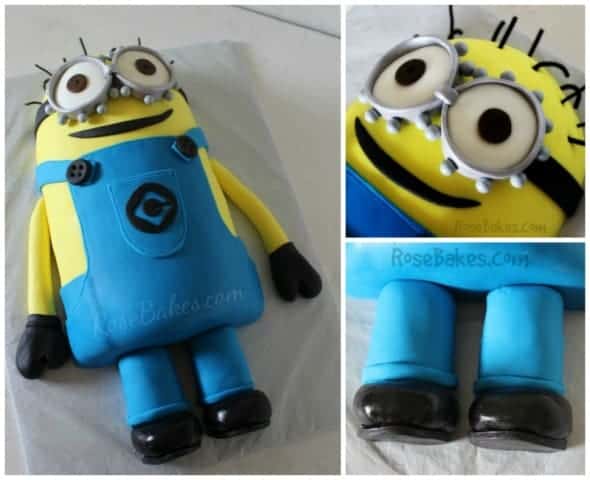 How to Make a Dispicable Me Minion Cake 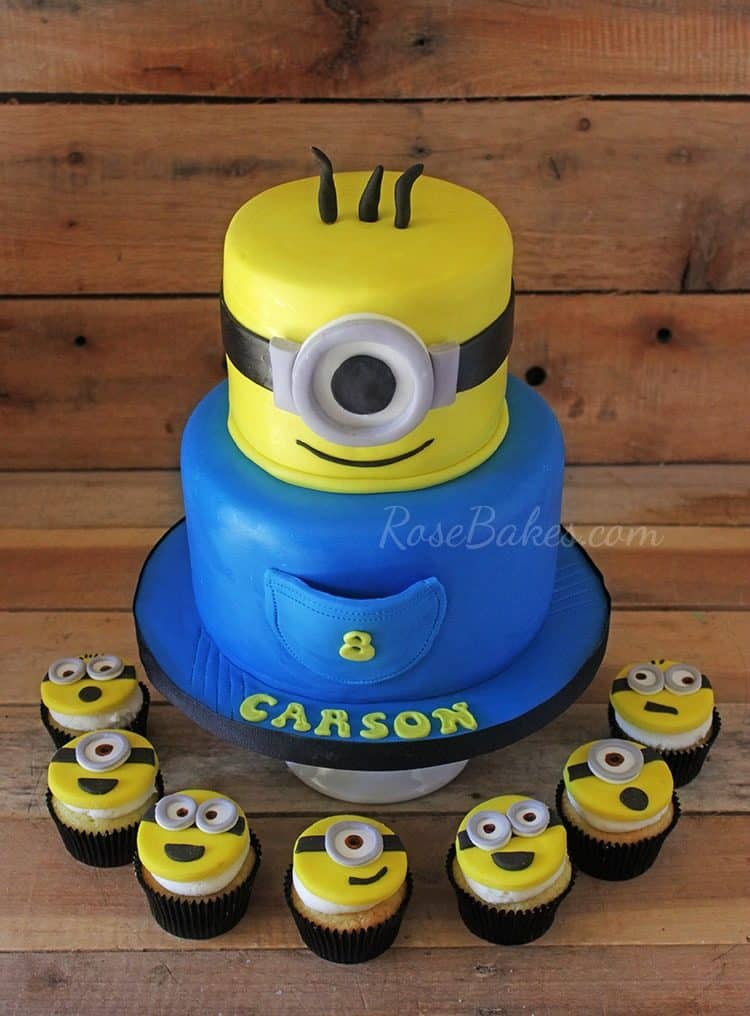