I posted this cake a few Thanksgivings ago (within a day of making it) and as I was going through my cake pics, I realized I had snapped some pics of how I did the frosting to make it swirled with two colors.   So here's a fun tutorial: How to Make Two-Colored Swirled Roses on Cake: Thanksgiving Cake. 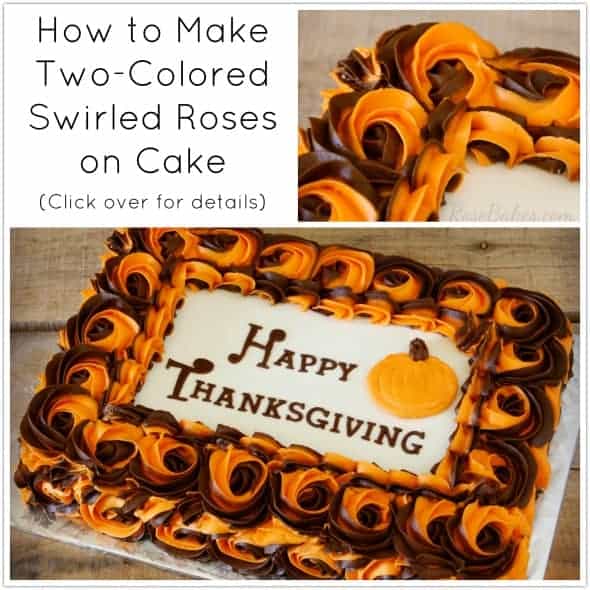 HEY - if you don't mind, would you PIN THIS?  Click here or hop down to the bottom image of this post!

Sometimes I worry that my tutorials are out-dated and everybody already knows what I'm about to share (like this one!), but usually, at least a few people end up benefiting from it, so I'm pressing forward anyway.. here's How to Make Two-Colored Swirled Roses on Cake.

Before I get into that, let me show you a couple of other cakes where I've done this. They're actually very similar, but I'm showing both anyway... 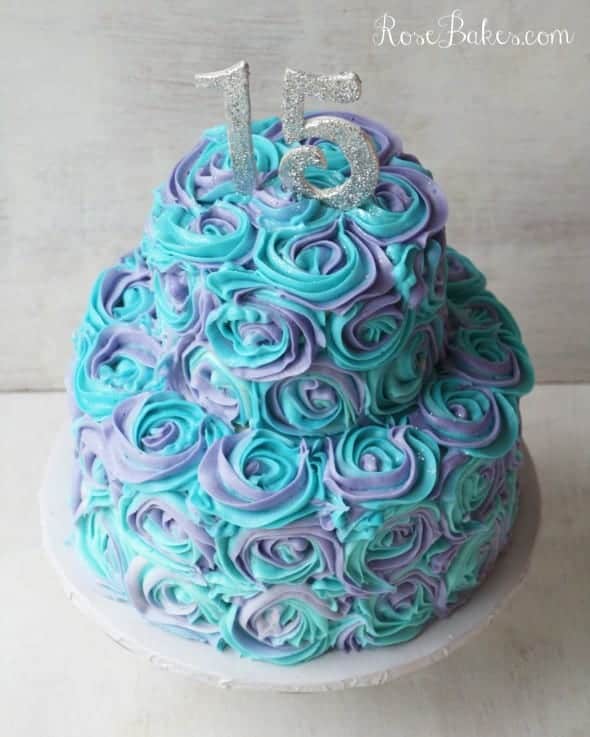 This was done with teal and lavender and cream cheese frosting.  Read more about it here. 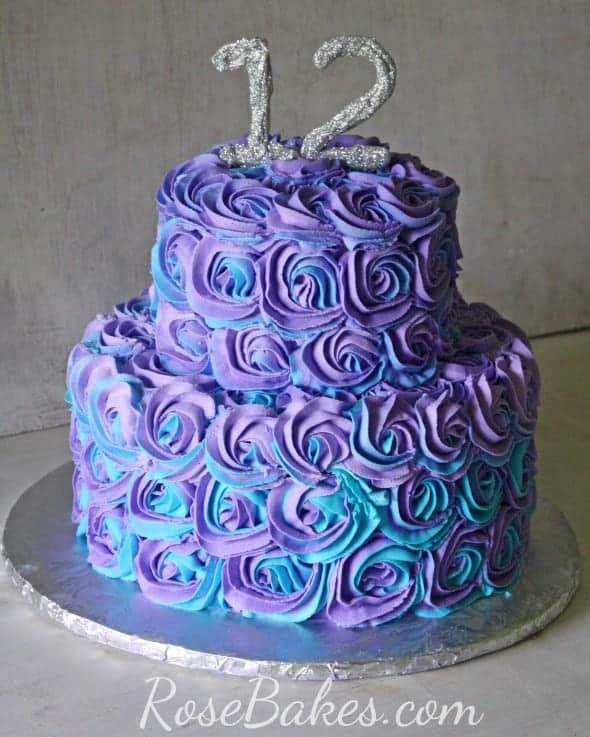 This one had more purple than teal (at the customer's request) and it was vanilla buttercream.  You can read more about it here.

Now, on to the Thanksgiving Cake. 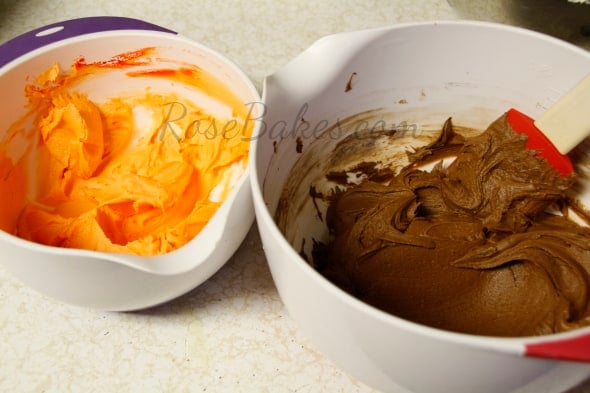 Start by mixing up two colors of frosting.  Before you ask, I can't tell you how much of each to do (I always get that question), but I can tell you that the roses take more frosting than "normal" for whatever size cake you're doing, so err on the side of caution and make a little more than you think you'll need!

For this cake, I was asked to do a Thanksgiving sheet cake but not given any other requests.  I knew I wanted to do something with the Fall colors, so I had this idea to mix up the orange and brown for roses!

Oh, and it was a 9×13 white almond sour cream cake with vanilla almond frosting. 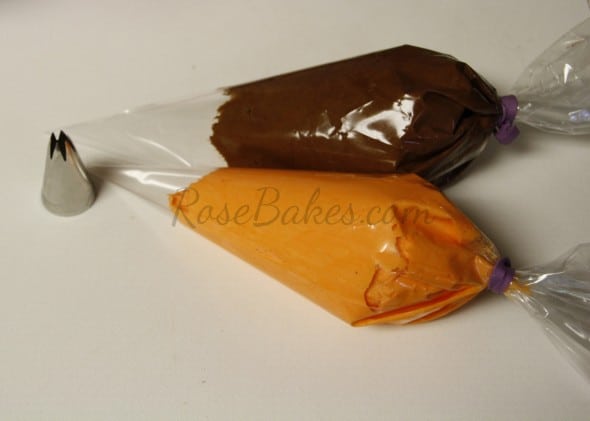 Now, you're going to need three frosting bags.  I prefer disposable for many of my jobs, and that's what I used here:  (3) 12" disposable piping bags.   Fill two of them with your frosting colors of choice. I prefer to not overfill - the're hard to work with - and I like to tie them with a clip (these are my absolute favorites!!) or bag tie on the end. 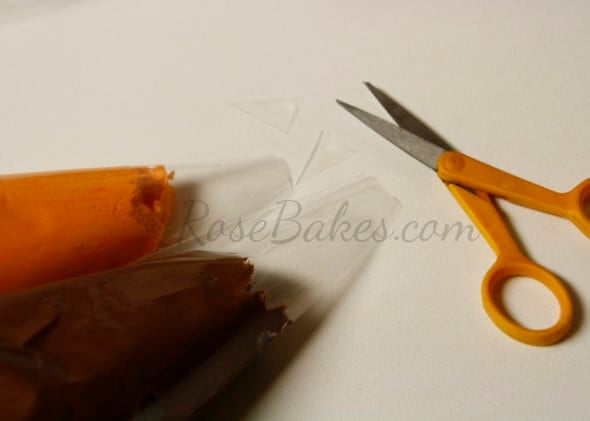 After they're full and tied, snip off the ends (but not too much!!) 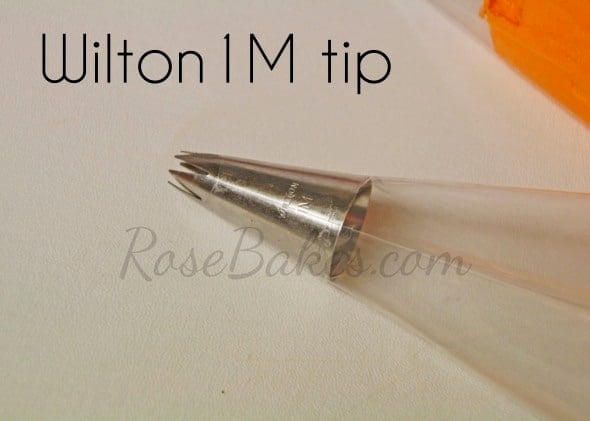 In the 3rd bag, put a Wilton 1M frosting tip.  I like to leave the bag as long as I can but still have the fill tip opening exposed. 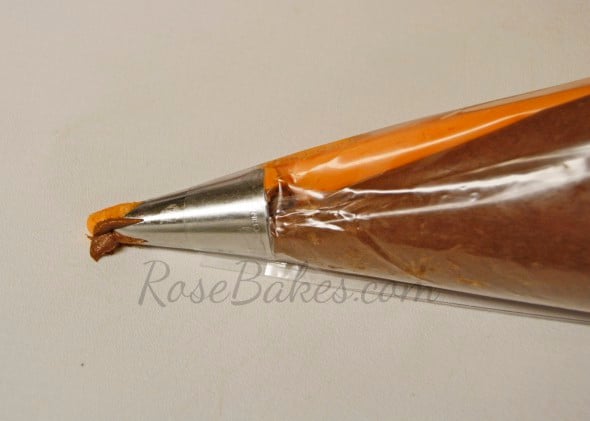 Now - here's the tricky part.  Hold the bags of icing together, lining up the ends so that they go in the same, and sort of squish them flat and put them inside the 3rd bag.  It takes a little practice to get this right, but once you've figured it out, it gets easier!

Now, just pip on your roses - starting in the center and going out and around.   Learn how to pipe the rosettes in this Craftsy class (on sale right now!). 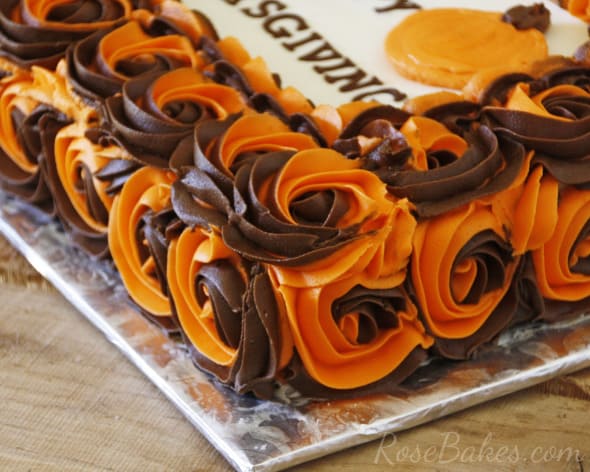 I went all the way around the bottom of the cake with the first row of roses (making them the same height as the sheet cake), then I did the top row around the outer edge of the top of the cake... 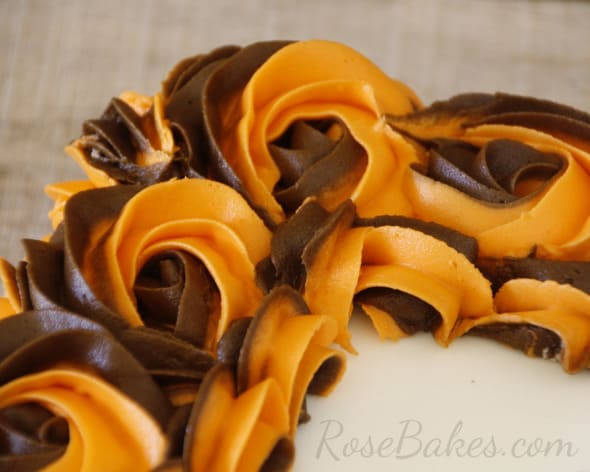 Then I piped a border inside the roses to give the rectangle in the middle a nice edge to frame the words.  The words which I did not attempt to pipe... because I told ya - I can NOT do that! 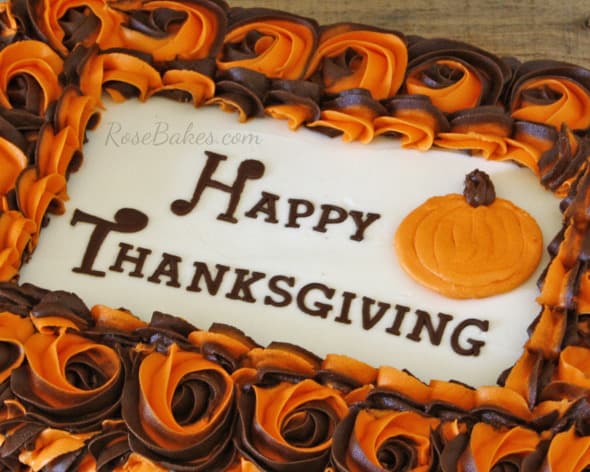 Instead, I used both my Funky Alphabet cutters and Block Tappit Cutters to do the wording and I piped a simple pumpkin off to the side.  See how I use Tappit Cutters here.

And that's it!!  Do you have any questions about this cake or how to do the two-colored swirly roses?  Leave me a comment!!

Here are a few of the tools I used to make this cake: