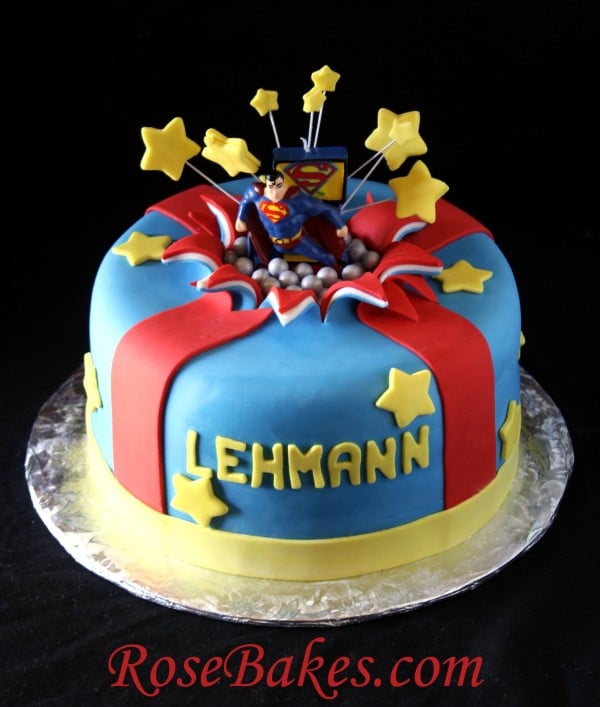 Last night I showed you part 1 of making this fun Exploding Cake!  If you missed it, hop over and read that post first!  So, we’ve got a fondant covered 9″ cake with the special center that we’ll use for the exploding effect!    OH, and I updated Part 1 to include a list of needed equipment! 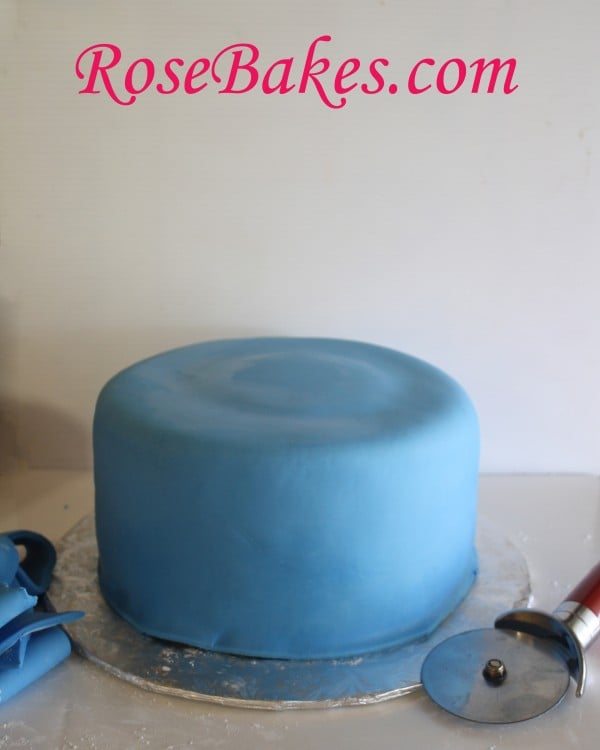 This is what your cake should look like (plus smoothed edges around the bottom).

Next up… you’re going to need an Xacto knife. 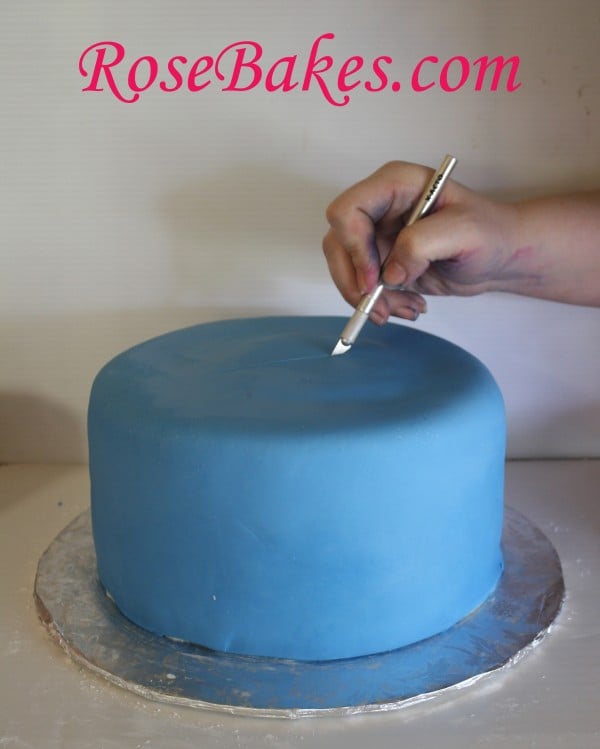 Start in the center and push your Xacto knife into the cake.. through both the red and blue fondant, down to the parchment paper.  You should be able to feel when you’ve hit the paper.   You’ll want to cut a line about 2″ long…out to the edge of the red fondant.  Now, cut exactly opposite that to form a straight line across.. about 4″ long.

I didn’t get a good picture of this, but you’ll next cross that line, making an “X”… then  you’ll bisect those 2 lines, eventually ending up with a “star” that has 8 points (or you will have divided your circle into 8 even slices (not cutting around the edges… just the lines crossing).  Does that make sense?    It’ll look like this… 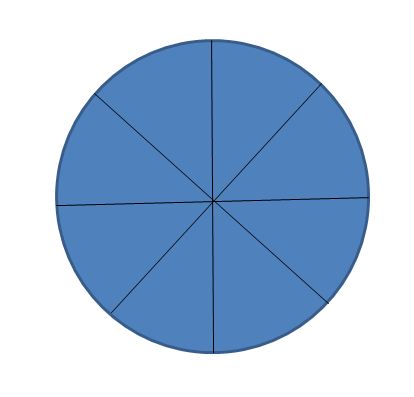 Okay, so once you have that done, then you’re going to start peeling those pieces of pie back. 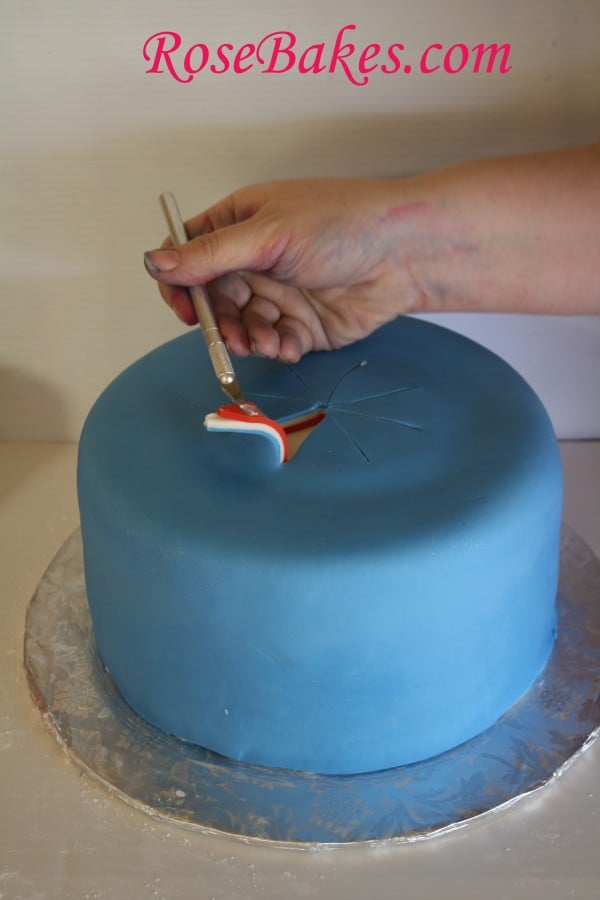 Just stick the Xacto knife in the center and lift up one point and fold it back over.

Note:  You’ll see some white between my blue and red.  That’s not normally there… I didn’t make enough blue fondant so I flipped my rolled out blue upside down and put a piece of white in the middle and rolled it out.  I flipped it back over and it “stretched” my blue out enough to cover the cake.  I didn’t think about it showing up in the “explode” part of my cake.  It looked great – but it was not planned! 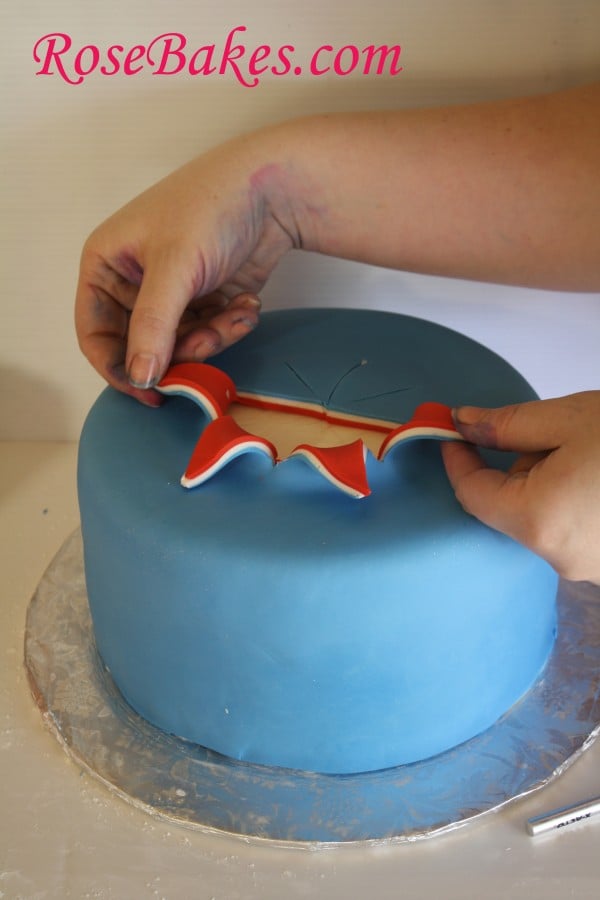 I told you about my blue hands… now they’re obvious!  Anyway, so you’re going to fold back each piece of the star.  Notice how the red has no buttercream on it?  That’s because of the piece of parchment paper that’s under there on the cake – separating it from the buttercream. 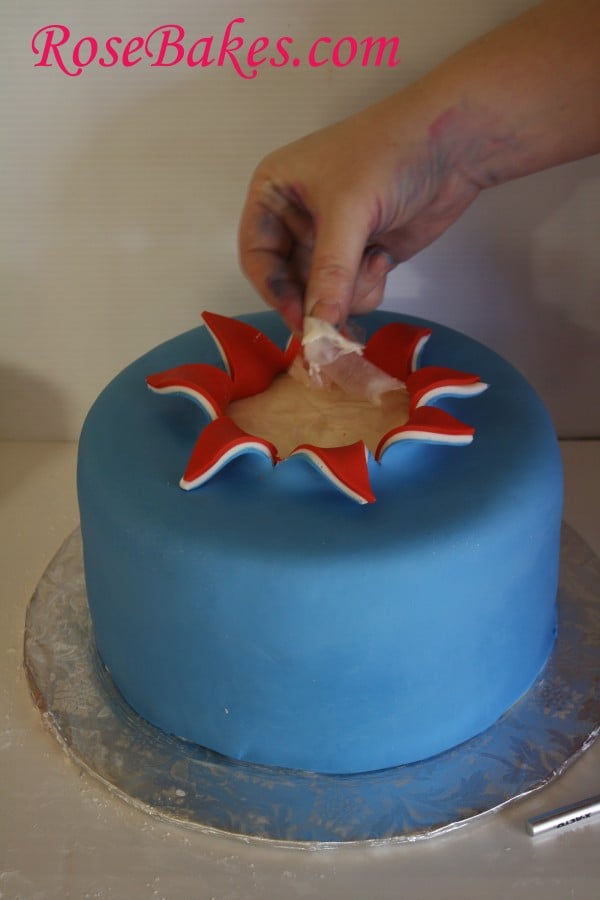 Arrange the pieces how you want them, and you’re done!  Once again I forgot to take a picture of the end of this stage, but here’s a picture after I added a ribbon… 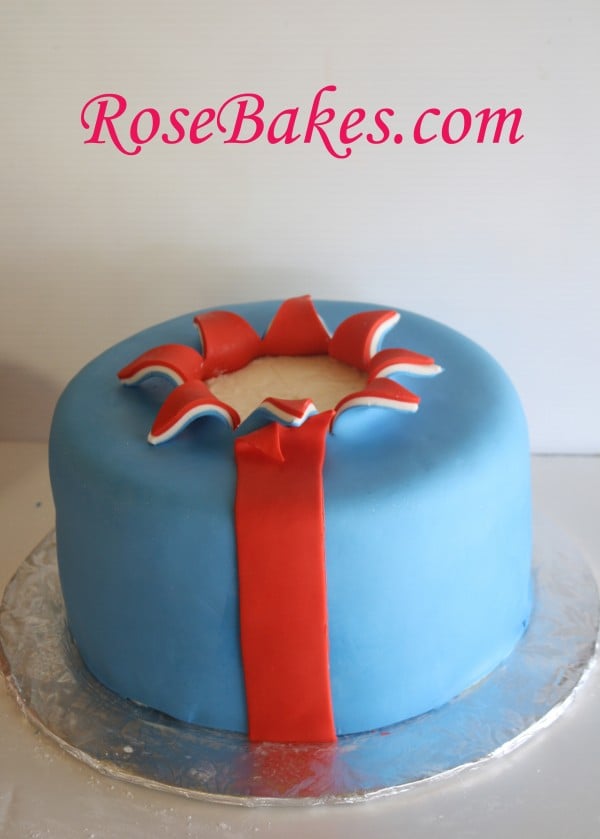 See how neat that looks?  That’s it… the exploding cake!!   Do you want to see the next step?  Go see How to Add Ribbons and Ribbon Borders to Cake.

Now, if you want to see the rest of this cake, stay tuned and over the next week or so I’m going to show you how I did the stars, the ribbons and the borders!!

If you have questions about making this cake, please leave them in the comments and I’ll answer!