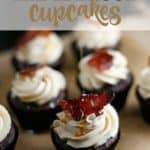 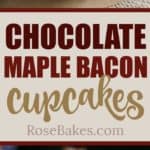 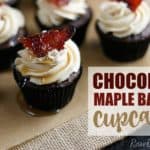 Chocolate Maple Bacon Cupcakes for an "I do!" BBQ.   It's been almost 3 years since I made the cupcakes and cookies for the "I do!" BBQ (way back in 2014). But something got me to thinking about them recently, so I had to look up the pictures.  Then when I realize I'd never shared them at all.

It didn't help when I saw the pictures of the Chocolate Maple Bacon Cupcakes - I became obsessed with making them again.  So I did.  Twice 😉   These are rich Chocolate Cupcakes topped with Maple Brown Sugar Buttercream , then a piece of candied bacon and drizzled with pure maple syrup.  The perfect combo of salty and sweet - creamy and crunchy.

I shared the Maple Brown Sugar Buttercream last Friday and then the Candied Bacon on Monday and finally, I'm sharing everything put together.  Before you get too far into this post - let me confess I don't have any of the recipes in this actual post - but they are linked up at the bottom!

I considered putting all of these recipes in one post, but it would've been a mile long so I decided instead to share them separately.  If that annoys you, I hope you'll forgive me.

When I looked back through the pictures from 2014, I was sad that I only took a handful of pictures and none with the cupcakes and the "I Do" Pig cookies together.

At first, I wondered why I took so few pictures, then I looked through the folders for that day and the day before... and now I know why.  I had quite the busy weekend back in 2014:

Gosh, I'm so relieved that I don't do that many cakes at once anymore.  It was just too overwhelming and my family life suffered too much!

Anyway, back to these cupcakes... let me tell you how I made them.

You can make them from straight-up cake mix, a doctored cake mix recipe (this chocolate cake recipe is what I used this time around), or you could make chocolate cupcakes from scratch (THIS recipe is the bomb-diggity!!).

While the cucpakes are baking, you can make some Maple Brown Sugar Buttercream.  The recipe makes enough frosting for 24-30 cupcakes (depending on how high you pile on the frosting), and that's perfect because the cake recipes I linked to make about that many cupcakes.

After the cupcakes are cooled and the buttercream is piped on, top the cupcakes with a piece of candied bacon.

Let me stop right here and tell you - candied bacon is addictive.

I could eat a whole plate of it without any cupcakes to accompany.  When talking to my husband the day I made them, I actually told him that I needed more recipes with candied bacon just so I'd have an excuse to make more candied bacon.  It's so, SO yum.

I know - that would not be a wise decision - to eat a whole plate of candied bacon - but in the moment... yeah, I could live with it.

Finally, if you didn't eat all the bacon and managed to get some on the cupcakes, the last step is to drizzle on some pure maple syrup.

Doesn't that just look mouth-watering?!   After baking them and sharing with my kids, I took the rest to church and they were gobbled up so fast - I felt bad that I didn't have enough for everyone.

Oh well... I had no idea how many people would be there that night.   I'll just have to bake them again sometime soon 🙂

These would be fantastic for a family get-together or maybe the upcoming 4th of July celebrations!

To recap, here's what you'll need:

And that's it.  Four simple ingredients combined to make one of the best cupcakes ever!  You will not regret making these and even the skeptics at my church fell in love with this phenominal combination.