Over the years I've had some small cake fails and some big cake fails and some cakes that I felt like were failures and yet the client was completely ecstatic!  But then there was that one time... where I had my biggest cake failure.  And it changed me in big ways. 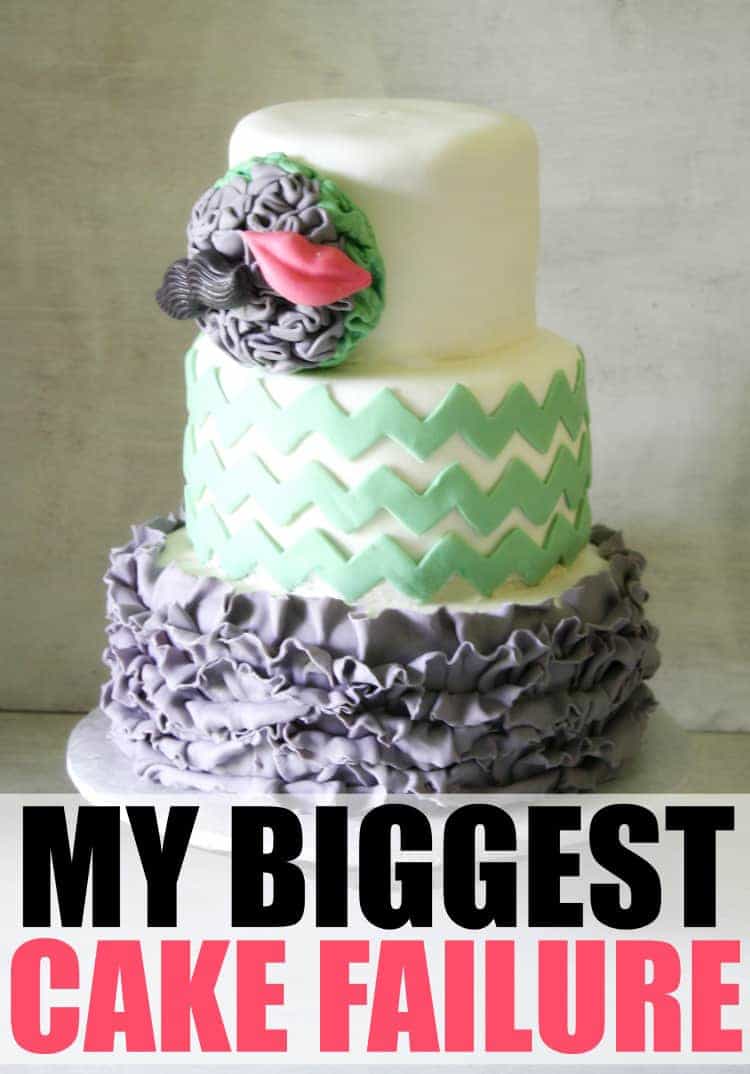 I've thought about sharing this post many times over the years and every time, I've talked myself out of it.   Recently I heard someone talking about their failures and how much we always only show our best side and never the bad stuff and I thought maybe it was time - to show you my worst cake experience.

Around three years ago, three amazing sisters contacted me about doing a cake for one of the sister's baby shower / gender reveal party.   They had dreamed and planned and were so excited to be getting a "Rose" cake for their event.

I was excited for them and quite flattered that they were that excited about one of my cakes.  They sketched the cake, sent me pics and ideas and we were all in a group chat on Facebook talking it up frequently!

And then that weekend came.  The cake was huge and one of my biggest orders for a baby shower - and I was so excited about making it.  It's been a few years so I don't remember all the details but I just remember being very pumped because it was a new design I'd never done before.

So... I made it.  I had been sent a picture (maybe an invitation?) via the message where I got the colors from and it had ruffles and a pom-pom flower and lips and a mustache and chevrons.

But as I got closer to finishing the cake... I realized the ruffles didn't look exactly like I wanted.  They were heavy and not standing like they should've.   They weren't terrible, but I couldn't seem to get the to look on the cake like they did in my head.

Also there was the pom-pom flower thingy.  I had never made one before.   I made it the night before and thought to myself... wow, this thing is heavy.  Like... really, really heavy.  Maybe it's too big?  I didn't listen to my instincts, instead I thought surely I can just "glue" it on with melted chocolate and it'll be okay.  Having never done one before, I just didn't know.

And then the lips and mustache - I had bought chocolate/candy molds to do those, but when I actually made them with melted candy melts - they were also heavy and sticky (it was insanely humid that weekend and raining). 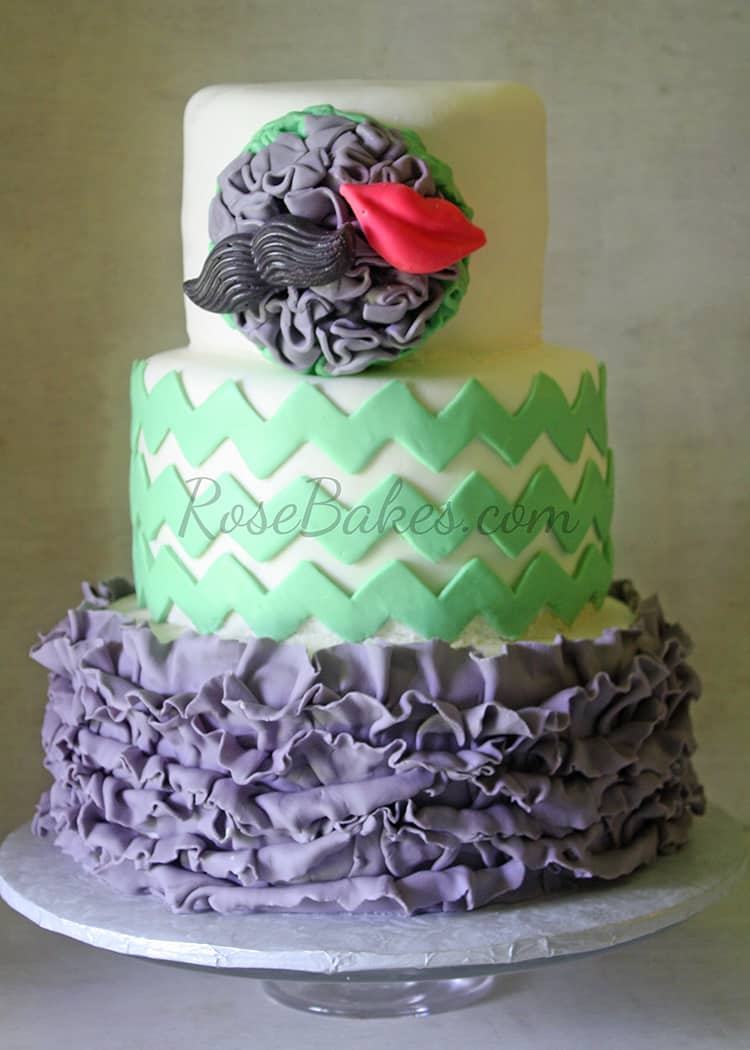 But still... I pressed forward.  When I got time to leave, I noticed a small gap between the middle and bottom tier - like the bottom was sinking a little, but it was too late to do anything about it, so I filled it with buttercream and I thought it looked okay (looking back now - I realize this was a huge red flag that something bad was happening... and that my buttercream filling didn't look as good as I thought it did.. ha!).

While I wasn't 100% satisfied with it, I thought it looked good and was still hopeful that the customer's would be happy.

So I loaded it up (along with two other cakes I had to deliver) and we headed out.  I think it was around 15-20 miles from my home to the church where the baby shower was happening and the more we bumped along, the more I realized I might be in trouble.

The bottom tier looked like it was starting to sink on one side even more.  The pom-pom flower started to sag a little and lean off the cake and the lips & mustache wouldn't stay put.  I don't remember how I handled it - I only remember the sickening feeling in the pit of my stomach that the cake was in trouble ... and praying that somehow it would be okay. 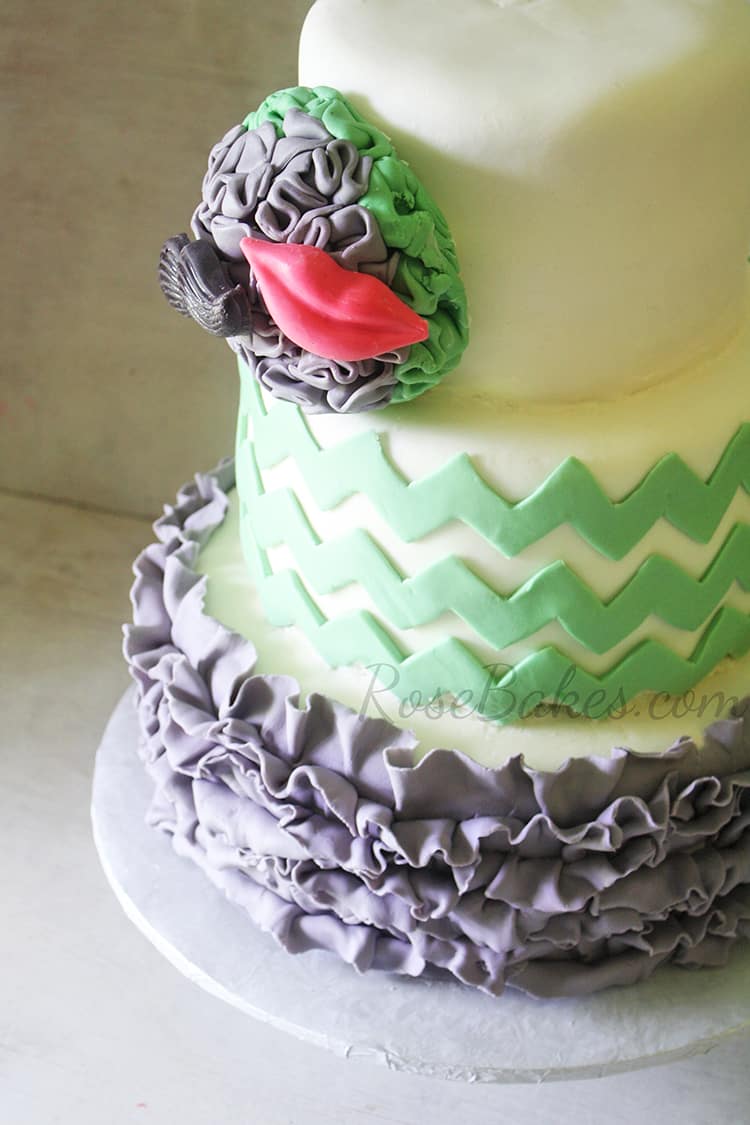 We finally got there and set up the cake.   The girls smiled and were polite but I could tell they weren't thrilled.  And it broke my heart.  But at that point, it was still intact , so I left to make my other deliveries.

Less than half an hour later, they called... the cake was falling apart.   I drove back to the venue - shaking and in tears all the way.

When I got there, the pom-pom had completely torn off the front of the cake - leaving the blue (gender reveal) cake exposed.

The cake was leaning and the bottom tier was full-out collapsing on one side.   It didn't register with me at the time, but where I had adjusted the lips and mustache to try and keep them in place... they were smudged and ugly.   It was a big, big mess.  They were trying to conceal the problems but truth-be-told, there was no fixing it.

They told me also that the colors were wrong.  In my inbox, the picture had looked like gray and a mossy-sage-green.  In reality, it had been a different shade of gray and a bright, lime green (thank you computer screen).

I began to apologize and cry.  I was embarrassed... horrified really.  The cake was a disaster and there was no making it better.   I went to my truck, got their check and tore it up - while promising to also refund the deposit they had paid by Paypal.

I told them nothing like this had never happened before (and it hadn't!) and I didn't understand why everything had gone wrong on this cake but I was as sorry as a person could possibly be.

I had ruined their party.  Ruined their surprise gender reveal.  Disappointed them when they were so excited to get one of my cakes.  I was humiliated and just so sick over ruining everything for them.     I didn't know exactly what had gone wrong with the cake but I knew it was 100% my fault and I was sure my cake business was about to be ruined too.

And then guess what happened next?

They began to console me.   The girls' mom hugged me and said it was okay.  One of the sisters wrote me another check and insisted that I keep the money, because at the end of the day... they'd all still get to eat cake.

But instead, they demonstrated love and kindness and compassion in the midst of their great disappointment.

As if that weren't enough, they never publicly mentioned what happened.  They didn't blast the cake or my business on Facebook.  They didn't bad-mouth me to other potential customers.   They never posted a picture or complained on social media.

When they could've rightfully told others to not dare order a cake from me because of my huge failure with their cake - they kept silent.

As I sit here typing this ... more than 3 years after that horrible cake experience, I am crying again thinking about how extraordinary their actions were.  How much they changed me.

In our current day and age where it's so easy to shame and tear down people publicly - to ruin reputations and businesses and make fun... it would've been easy (and justified) to post a picture of their falling-apart-cake and warn others away from my business ... but they didn't.

And I was astounded and humbled and brought to tears over and over again.

Initially, I decided to quit doing cake.  I was not willing to risk ruining anyone else's event.  I had no idea what had gone wrong that weekend and I was afraid of repeating it.

I barely slept for almost a month.  I would lay awake at night thinking about all the things that I could've done differently to maybe have a different outcome.

In the meantime, I still had cakes on the schedule (that was during a time when I was taking sometimes 4-6 cake orders per weekend) so I had to keep working even though I didn't take any new orders for quite a while.

But with every cake, I was riddled with fear... fear of something going wrong - fear of it falling apart or decorations tearing off.   I was a nervous wreck every time I started to work on a new order and I'd have nightmares about them falling apart.

I eventually came to terms with my mistakes that weekend.  I know some of the places where I went wrong: heavy decorations were a major contributor and using a computer screen image without verifying the colors.   I never did figure out other things, like why the cake began to collapse and fall apart, when I baked and built it the same way I've baked hundreds of cakes before and since then.  I still can't explain it all - except to say maybe God had a big lesson in it for me.

You see, the experience also changed me for the good.   The behavior of those sisters and that Mama  - the way they treated me when I deserved so much worse - made me want to be a better person.

Many, many times since then, when I've received poor customer service or have been disappointed in something or someone, I've thought of those amazing women and instead of being angry or throwing a fit - I've extended grace and kindness... even sometimes undeserved.

I'm sure I haven't followed this 100% of the time, but I genuinely try to remember their kindness that day and extend it every chance I get.  I don't publicly blast people or businesses even if I feel it would be justified.

They were a living example of the scripture, "Do unto others as you'd have them do unto you," (Luke 6:31) and I wanted to live that out the rest of my life.   Because they way they treated me that day?  That's the way I would've wanted to be treated even though I'd never have dreamed it would really come out that way.

From then until now, I strive to treat others the way I want to be treated - with love and kindness.   Showing mercy instead of ugliness even when the mistakes are obvious.   Not publicly tearing down someone even thought they might deserve it.

To the sisters and Mama... you know who you are.   If you're reading this, thank you.  You will never know how much your kind words and actions meant to me that day... and changed me for a lifetime. You are beautiful, lovely ladies that I will always admire.  xoxo    P.S.  Please forgive me if I've messed up any details - it's been a long time and I'm sure my memories aren't perfect.