Today is Day 21 of the Write 31 Days Challenge and I want to share the Fall Dessert Table I did last night!

If anybody's counting, I missed another day of the writing challenge yesterday but it was not my fault.  You see, while we were out at the event where I did this fall dessert table, my kids were home and the power went out.  When we got home hours later, it was still out.. til 1am!  Around 11pm I gave up and went to bed.   No electricity = no internet = no blogging.

But you know what it equals?  A full nights sleep!  I have felt pretty yucky all week but I woke up this morning feeling really good and rested for the first time in days!  Yay for silver linings!

Okay... let's talk about the table! 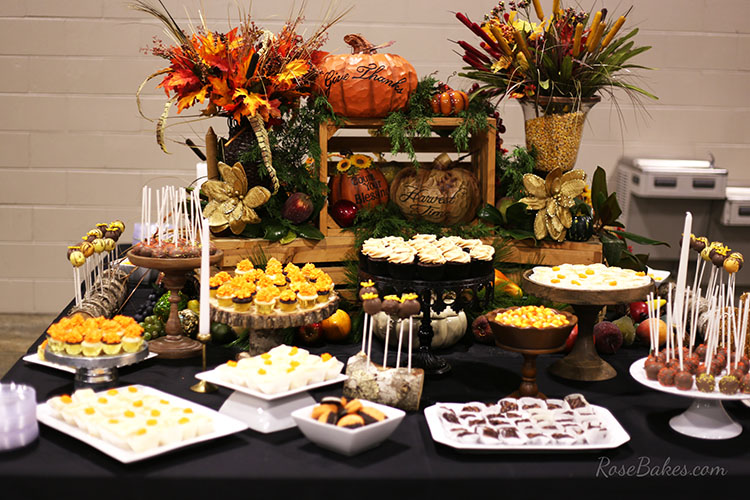 This was the front of the dessert table, if it had a "front".  My fantastic, beautiful sister-n-law did the centerpiece for the event.  It was in the center of a huge square of tables and then the desserts went all the way around all sides.

We learned a couple of years ago that when you have this many guests, you don't want all the desserts on one long table because then you end up with long lines.  By spreading it all around a huge square, guest can walk up to any side and pick what they want. It works beautifully!

But if the other side was the front, this was the back: 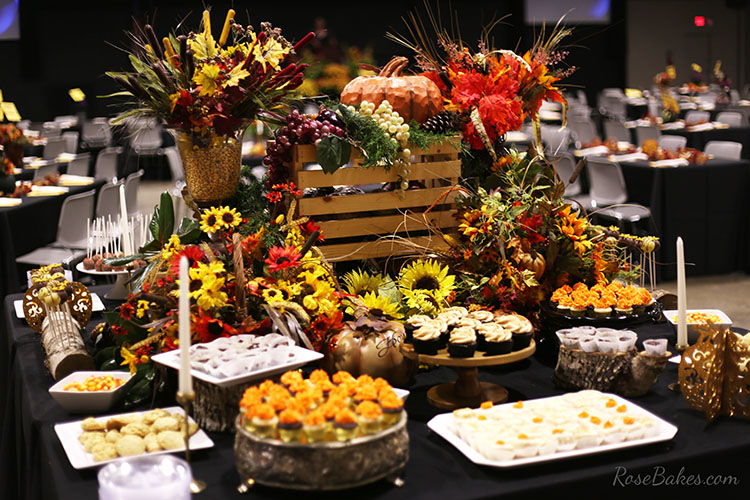 We used a mixture of colors and textures... white dishes, stumps and logs, some silver, some wood, some black.  We wanted a "dressed up" rustic look with fall colors!  I don't know the exact number, but there were 830+ pieces of dessert.

I honestly am not sure if there's a "right way" to calculate how much dessert you'll need for something like this but my goal was 750 pieces - assuming the average person would walk up to the table and put three 3 things on the little dessert plates.  Because I couldn't calculate exactly how many things would come out of each recipe, I did my best guess and overshot by about 80 pieces.

I sort of panicked when the first several people grabbed one of everything, but thankfully not everyone did that and I ended up having plenty for the crowd! 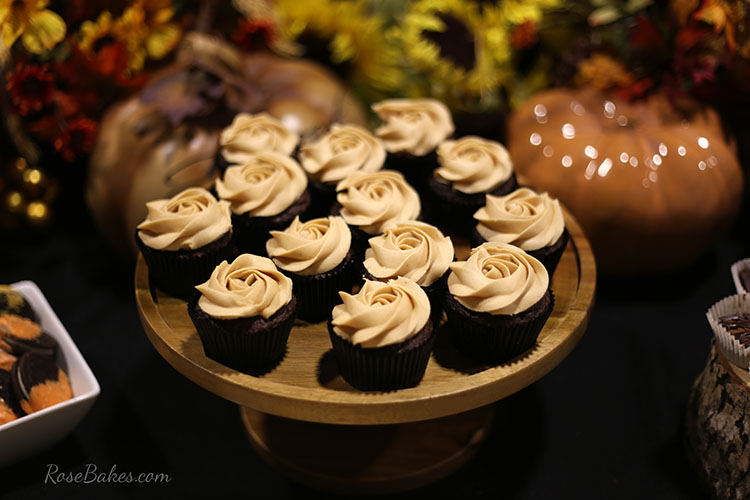 Then after baking a batch of those, I re-thought that and downsized the rest to mini-cupcakes: 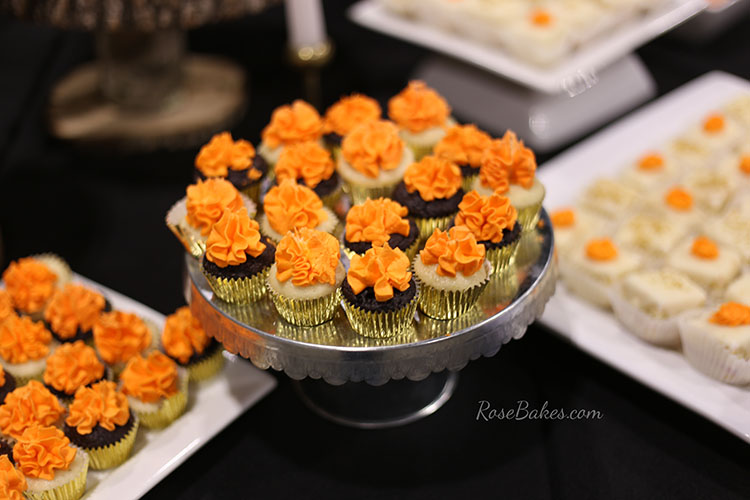 Hundreds of mini cupcakes, actually.  Both white almond sour cream and chocolate.  I baked all of them in gold liners 🙂

And they were all frosted with orange vanilla buttercream.

I also made some bakery-style sugar cookies (every last one of them was gone!). 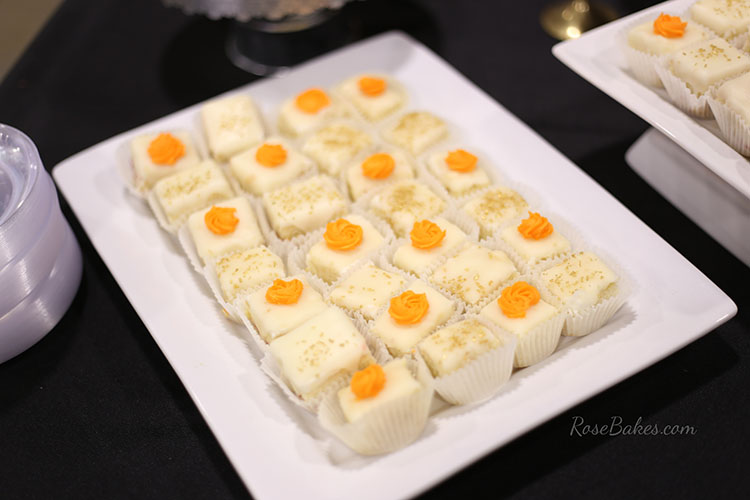 Then there were the petit-fours... my most favorite dessert of the night and a huge hit with all of the guests.  Today one of the event guests called and asked about booking a wedding a year away based on the flavor from those little bites of deliciousness!  I tell ya... they're the best thing I make (recipes and tutorial here)! 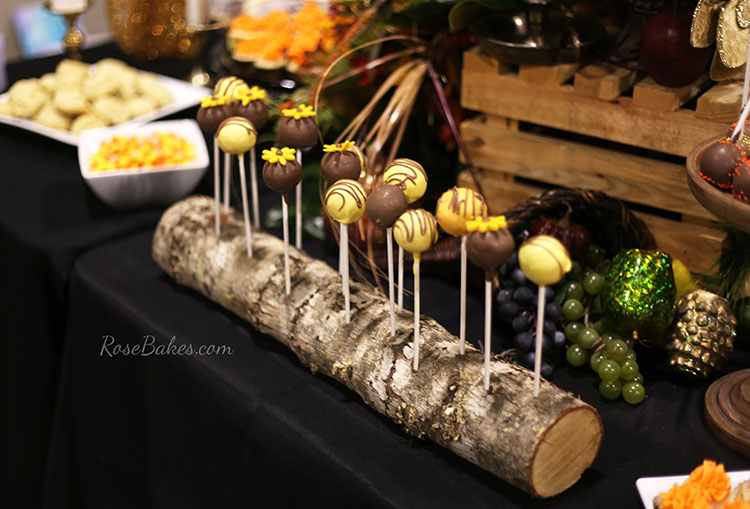 Probably my most favorite display for the evening were these standing cake pops in the log stands.  Richy made these logs for me and I love using them for rustic-themed events.  I had three of them on the tables!  (Okay - he didn't "make" the logs, but he cut them, then cut a sliver off one side so they'd lay flat, then drilled the holes for the lollipop sticks!) 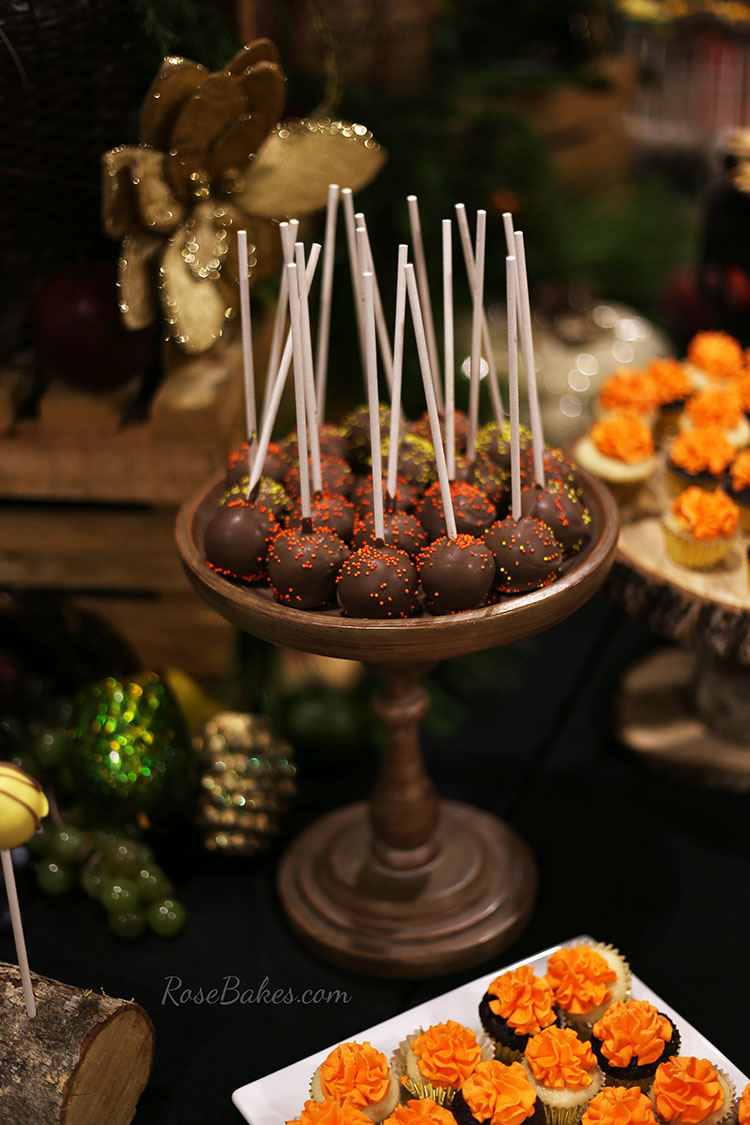 There were also these cake pops... flipped up the other way!!   The yellow dipped cake pops were vanilla flavored and the chocolate dipped ones were chocolate.  The flowers were made from modeling chocolate!  (tutorial for making cake pops here) 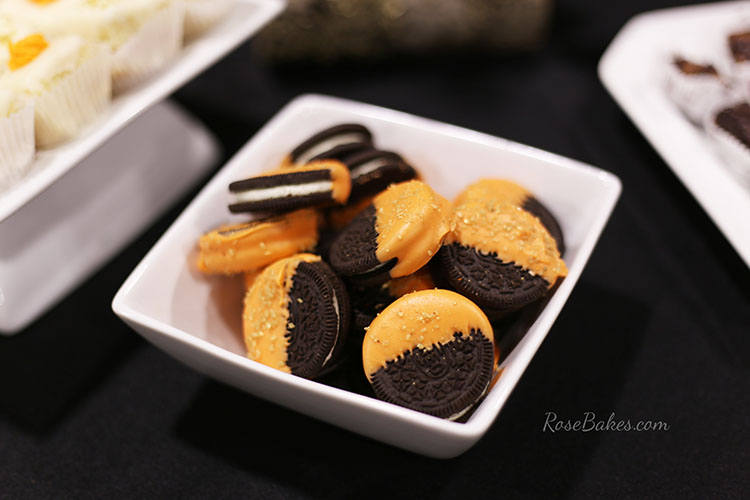 For the guests who didn't like fussy... we made white chocolate dipped Oreos with a little gold sugar on top!  I paid one of my younger boys to make these for me.  He's too young to help on a regular basis, but when I have simple jobs, he loves earning spending money!  I showed him how to dip and sprinkle a couple of them and he did the rest all on his own! 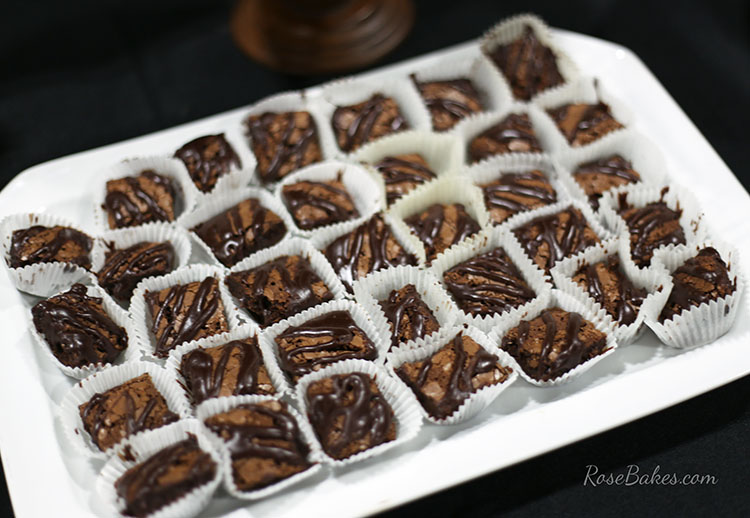 And I made these thinking of my Mama... she loves Brownies, so I made little brownie squares drizzled in ganache!

And last, but not least... I had to include bowls of candy corn all around 🙂  If you've followed me for any time at all, you know that's my most favorite candy of all! 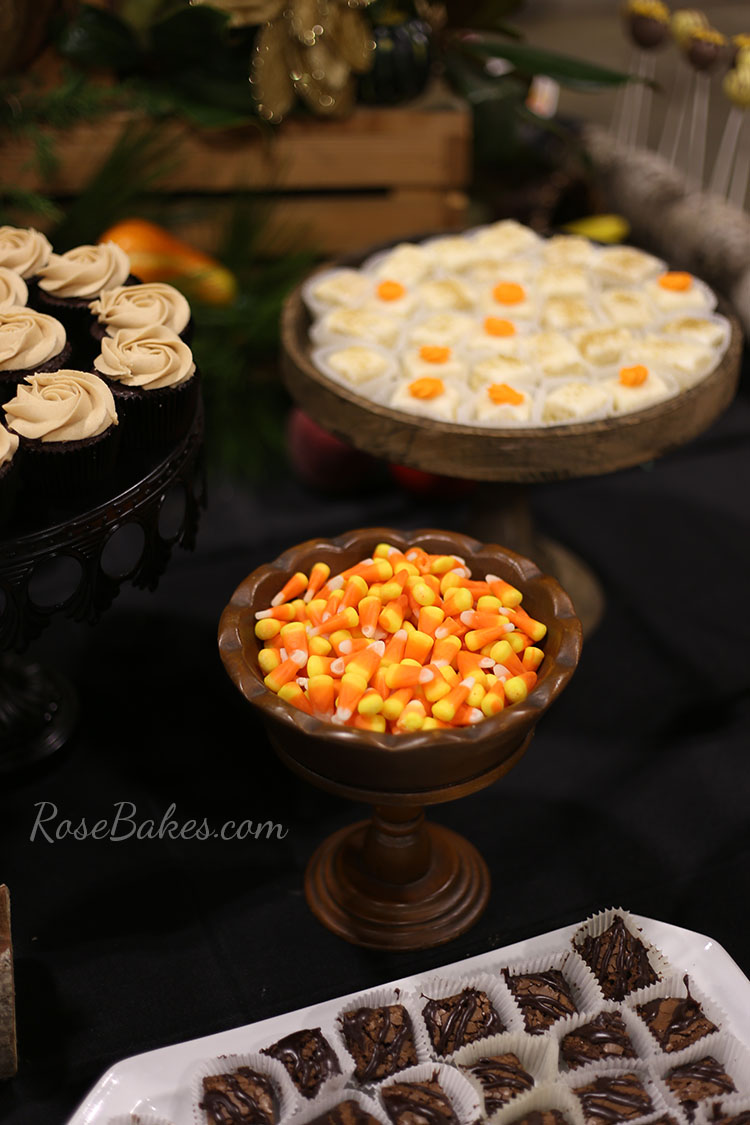 I wondered if guests would think that it was cheesy, but I can't tell you how many grabbed a handful and one man even comment that that was his favorite thing on the table 😉  Ha!

So that's that... my Fall Dessert Table!

Do you have any questions?  Leave me a comment!!