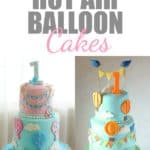 Today I'm sharing a couple of my favorite Hot Air Balloons Birthday Cakes. These were made years apart, but when I looked back at the pictures and similarities, I knew I wanted to share them together! 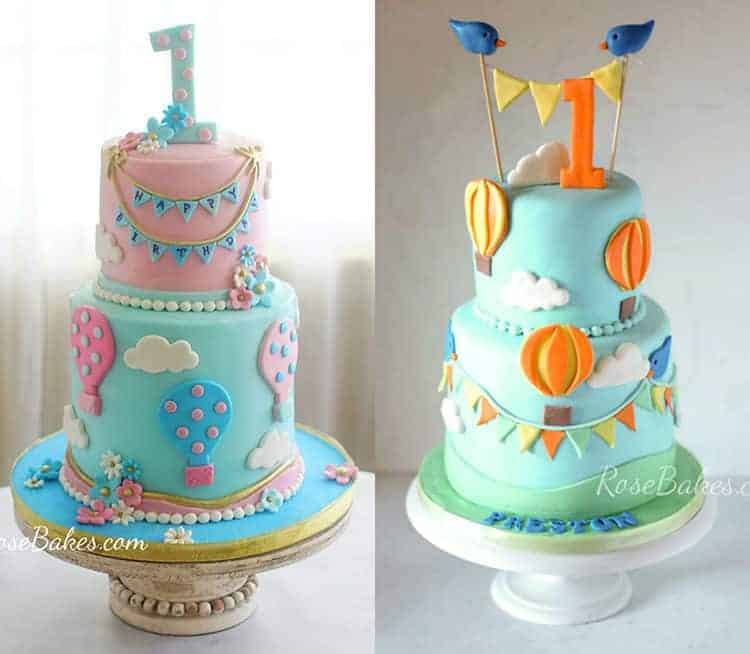 This weekeend has been a doozy and it's not even over yet.  My first cake out the door was a small smash cake for a photo shoot. It was small and easy enough - except I had to get crafty to make the topper.

Paper, scissors, string, glue, markers... not exactly my tools of choice 🙂  I really don't mind - it was fun.  But definitely out of my cakey comfort zone.  Then for today, I had this Unicorns & Rainbows Cake and smash cake.

That cake ended up being so hard. I'm not sure what was going on, but my fondant was not cooperating at all.  I feel like it probably had a lot to do with the insane heat and humidity going on the past few days.

I covered the cake and spent around 2 hours decorating it. Only to have it all start to droop and sag so I had to tear it all off and start again. The second time I didnt' finish until after 4am.

Then when I got up this morning, just a few hours later, it had sagged again.  I almost never have issues like this and it killed me. I cried. I called friends. I went back and forth a million times and still had no good fix.

In the end, because I didn't feel good about putting out a cake that I wasn't proud of, I called the client and explained. After sending a picture, she wasn't nearly as upset as I was. She just asked that I add a few more flowers or a cloud or two to cover the problems.  So I did and it wasn't so bad.

Anyway... I have one more cake for Sunday afternoon, but for now, I want to sit and write.

I haven't written any this week and gosh, I miss it. So, I'm going to tell you about my Hot Air Balloons Birthday Cake from last weekend, along with one I did a few years ago: 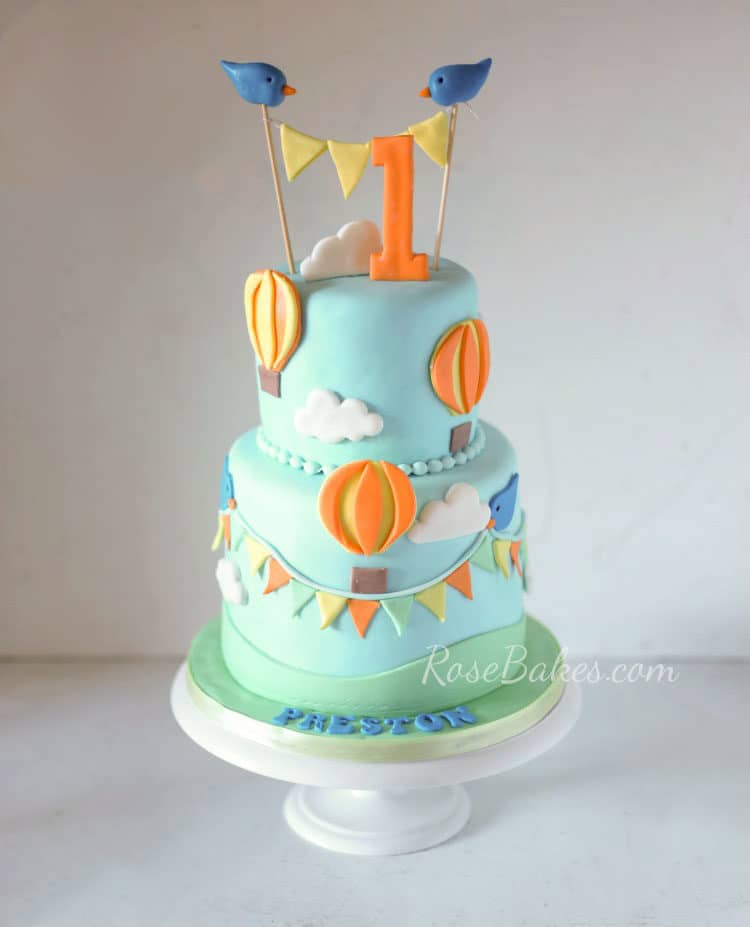 First up - the cake I did back in 2016.  I've mentioned before here that in a nearby town, there's the annual Great Mississippi River Balloon Races.  And again, this cake was made in October around the time of that event. 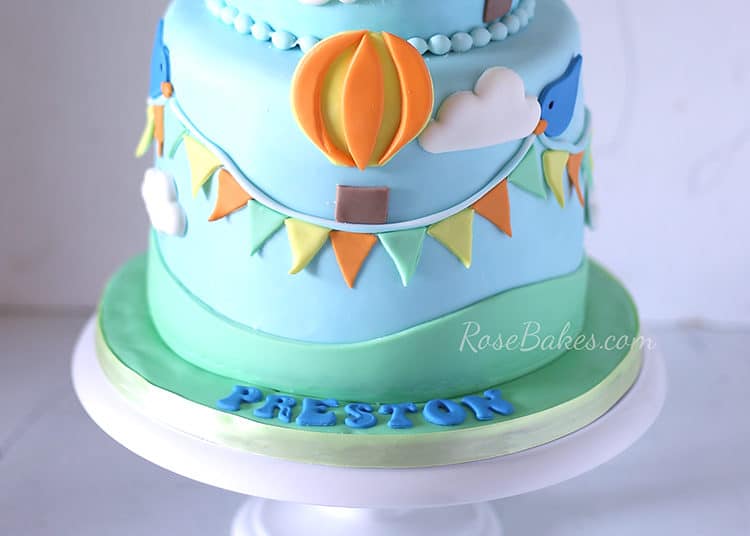 Here's what I can tell you about this cake 🙂 It was 5" and 7" round tiers (3 layers on the bottom), baked in my favorite Magic Line pans.  The cake was vanilla cake filled and frosted with vanilla buttercream. 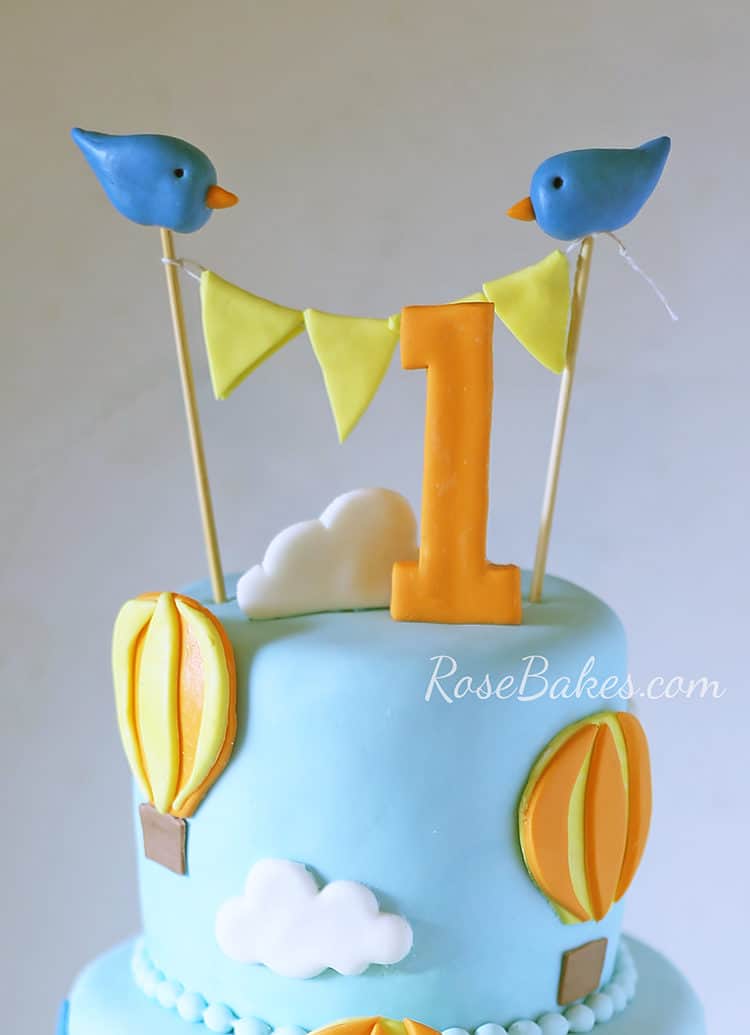 I covered and decorated it with homemade marshmallow fondant.  Back when I did this cake, I hand cut the balloons but now I use a hot air balloon cookie cutter.  Here are some other tools I used:

Now... let's talk about the more girly version of a Hot Air Ballon Cake I did this past weekend! 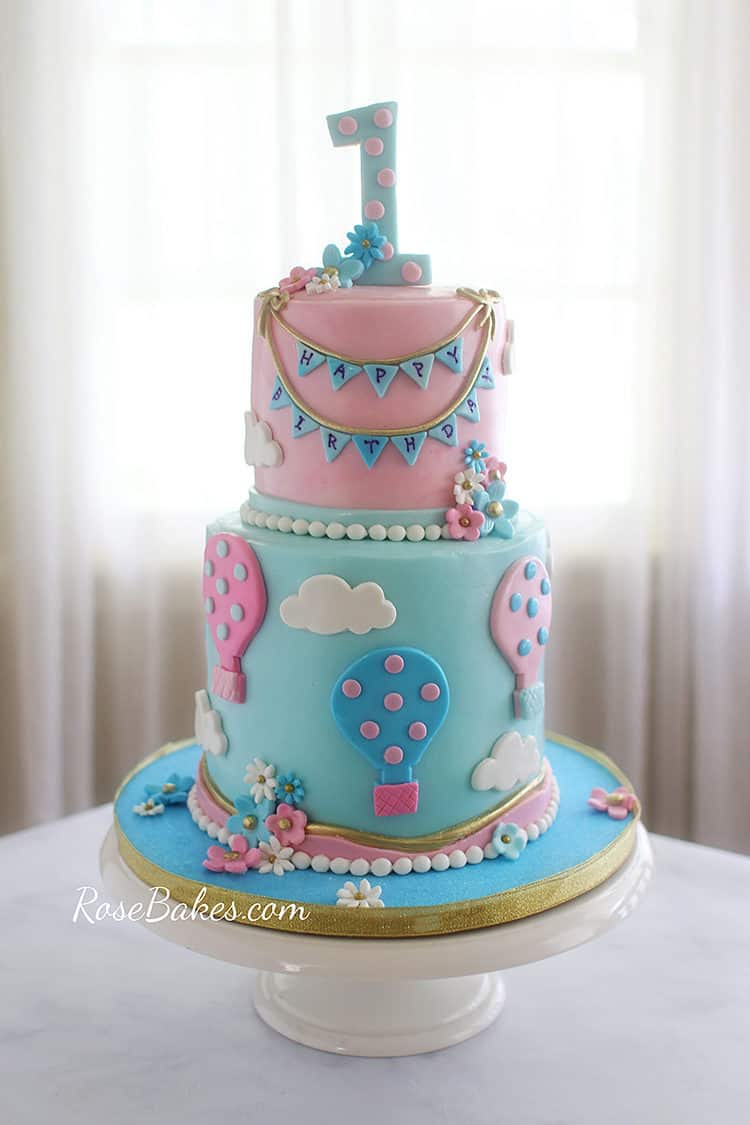 I used so many of the same tools and methods - just different colors and a little bit more of a feminine touch. 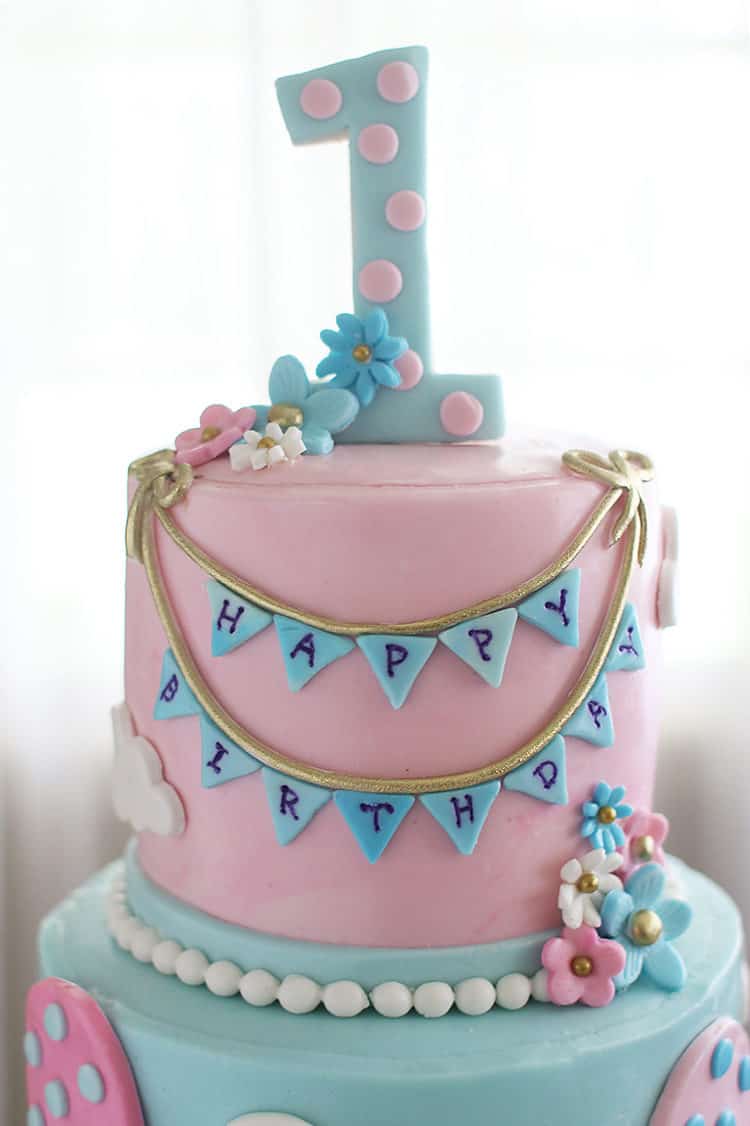 For the bunting on the top tier, I used the same cutters as mentioned above, and I used a food marker to write "Happy Birthday" on the flags. The ropes were done with white fondant, then I painted them gold with a mixture of Imperial Gold Luster Dust and Lemon Extract. 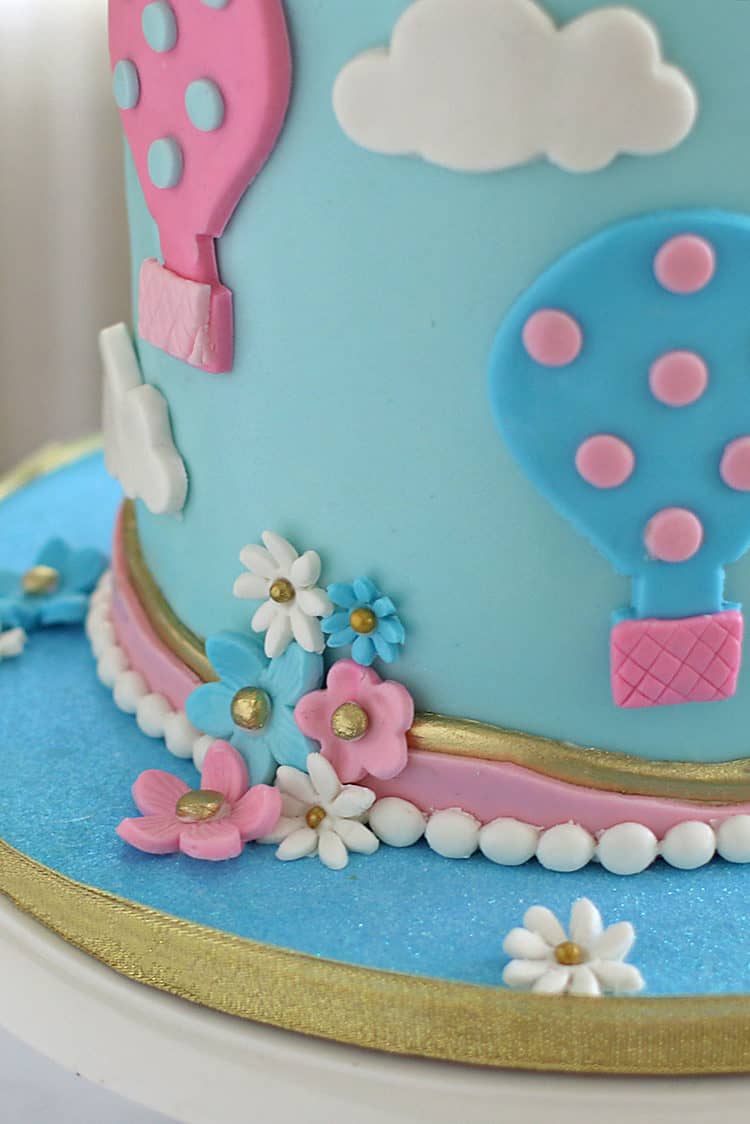 This cake was also 5" and 7" tiers (3 layers on bottom). It was Wedding Cake with rainbow jimmies... Confetti Cake!  I filled and frosted it with vanilla buttercream.

Alrighty... I think that's all of the details on the Hot Air Balloons Birthday Cakes. Did I miss anything? Leave me a comment! 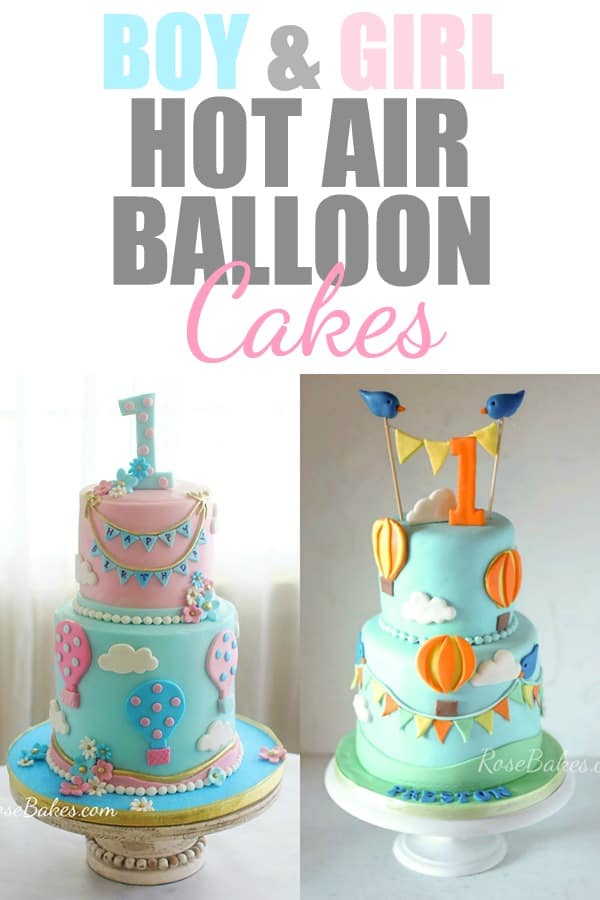 Click on the images below for other Hot Air Ballon themed sweets I've done! 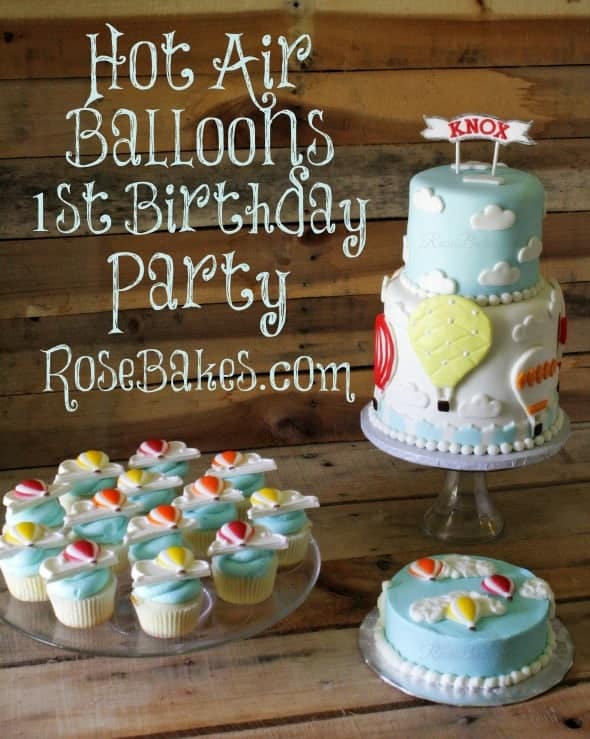 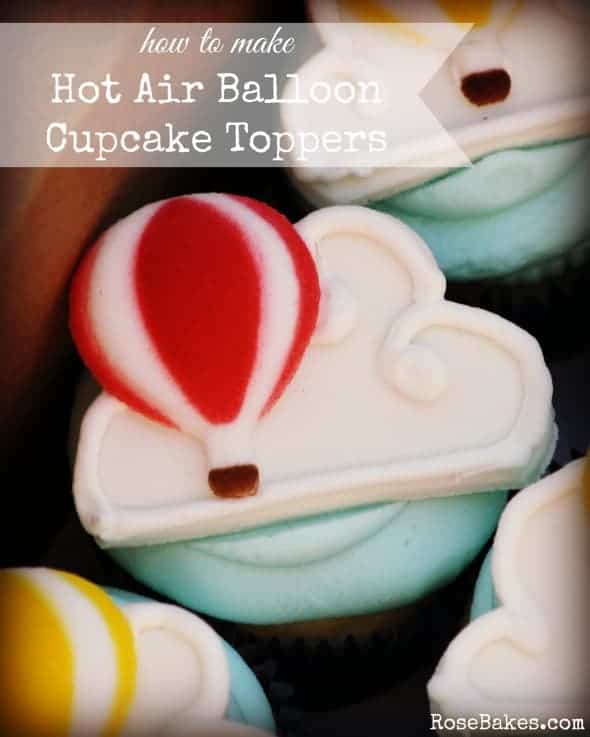 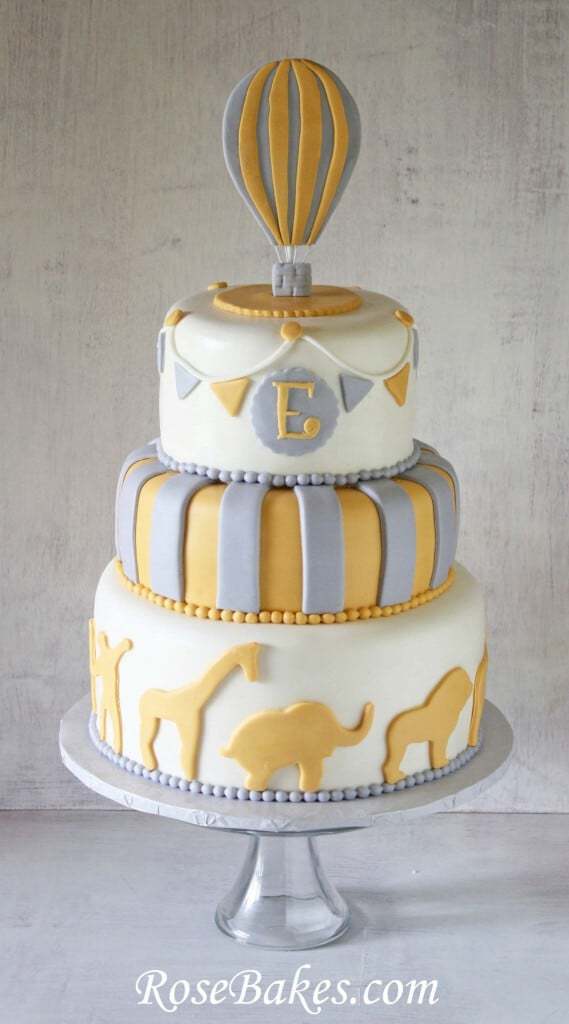