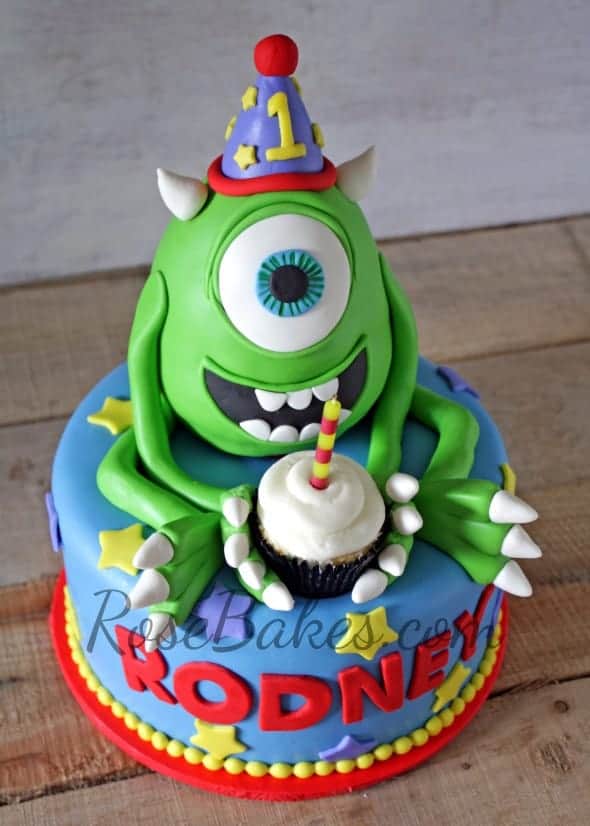 Ya’ll.  I’m getting farther and farther behind on my cake posting.  This Mike Wazowski Monsters Inc.  Cake was done for my nephew last September.   I cannot believe it’s taken me 11 months to get it posted.  11 MONTHS!  Oy!

At this rate, unless I just quit doing cakes altogether and just write about them, I’ll never get them all posted!  Any brilliant ideas for me to catch up?  Other than editing and posting pics 24/7 for a month or so??

Let me tell you about this cake and even better… the party!!   My sister-in-law Amy has more creativity in her pinky finger than I do in my whole body !  She always goes all out for her kids parties and decor (remember Tucker’s Cowboy Party?)!  Here are some pics from Rodney’s 1st Birthday – a Monster Party: 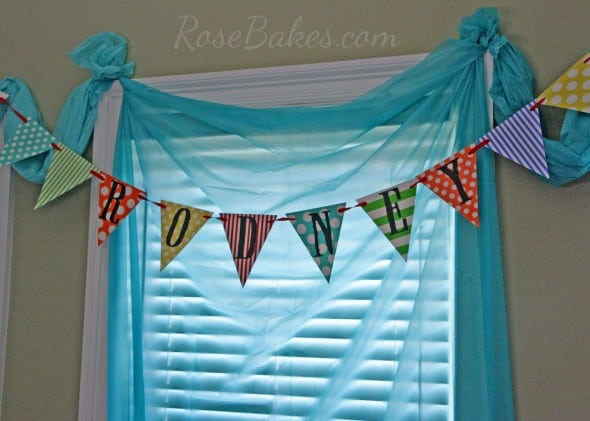 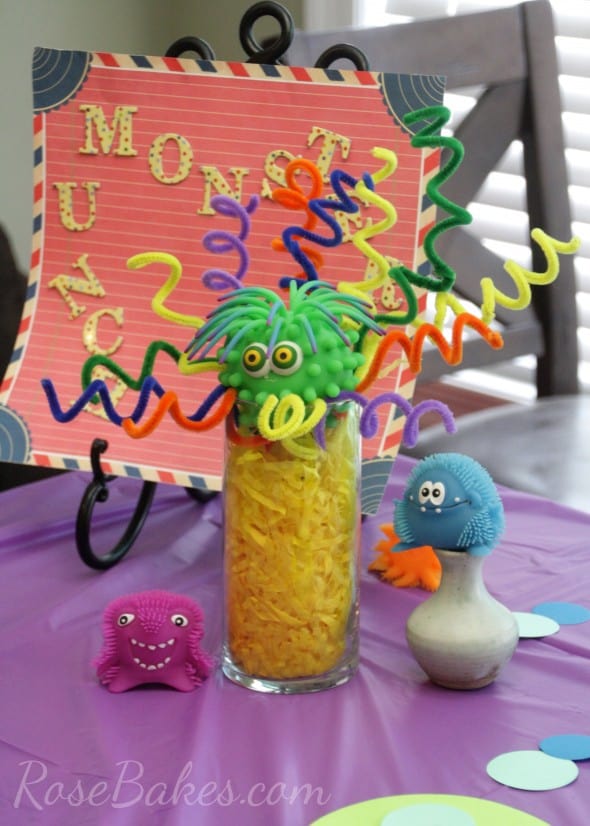 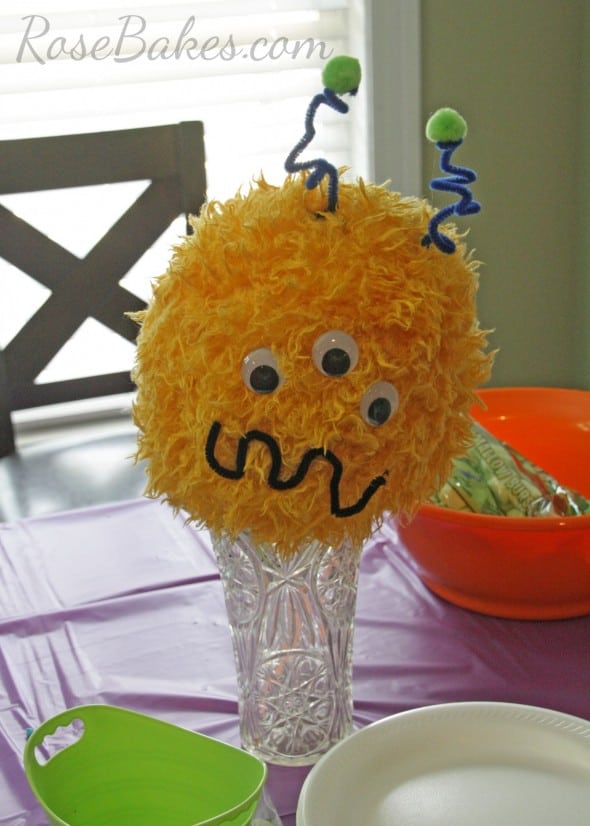 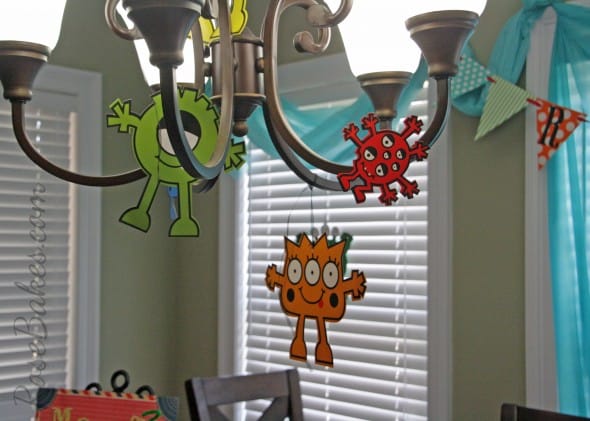 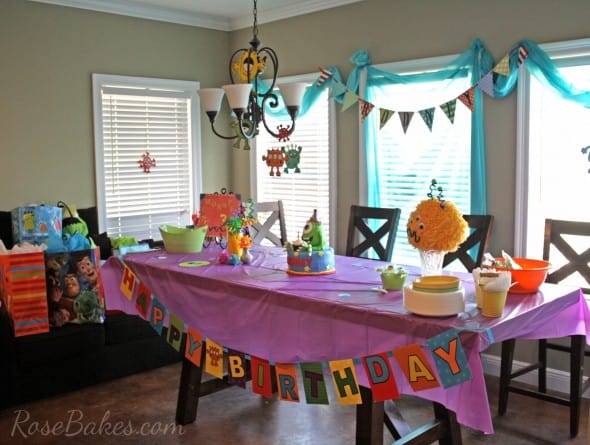 Isn’t that all just adorable??  And it’s SO bright and happy!  I had about a million more pictures (and the table wasn’t even finished in these pics), but I was too lazy to go through them all. 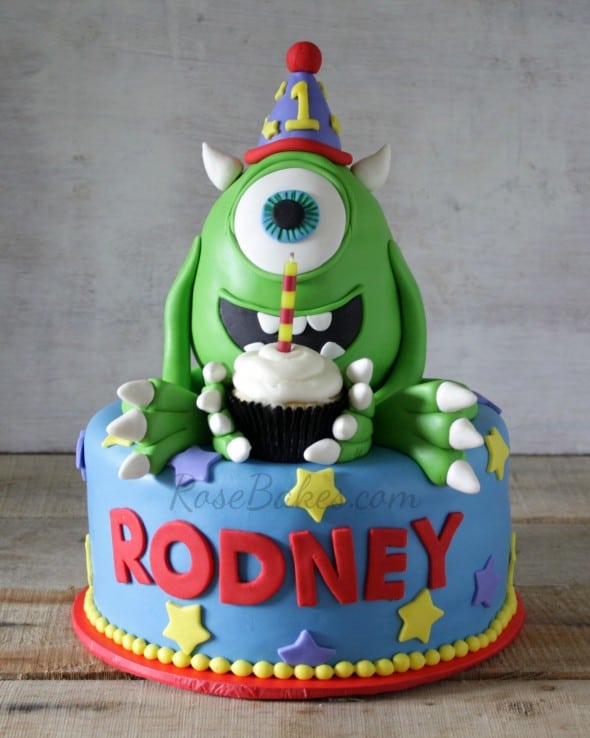 Anywho… here are some more details about the cake.  The bottom was a 9″ round cake.   It was confetti cake with vanilla buttercream – decorated with homemade marshmallow fondant.

I used a silicone pearl mold to do the border, my white alphabet letter cutters for his name and some random star cutters to dress it up a little more.  OH, and the red fondant was Satin Ice brand. 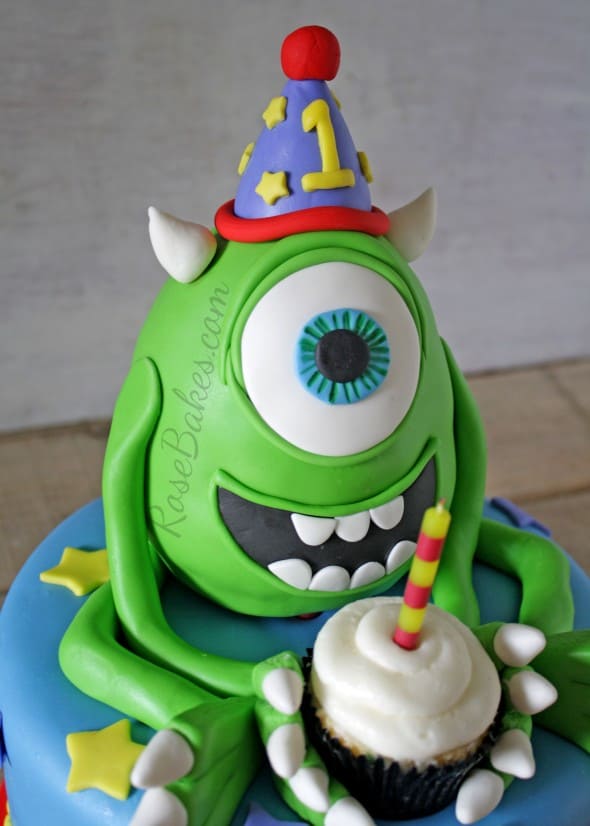 For Mike Wazowski, he was also cake!  I baked two half balls in the Wilton Sports Ball Pan and also a 6″ round cake to go in the middle – to make him more egg shaped vs. just round.  You can see how I cover a round cake in fondant here. 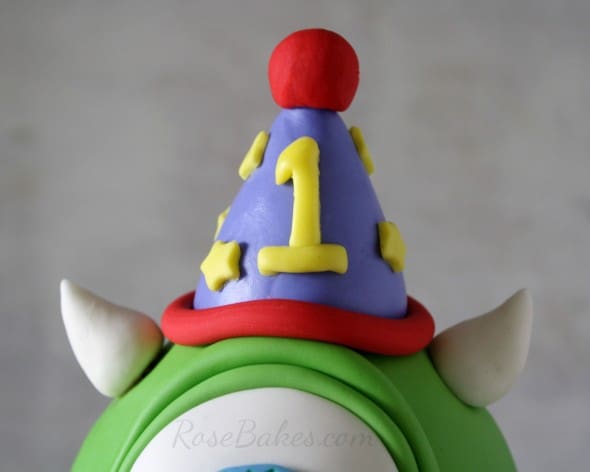 Then I covered him in green homemade marshmallow fondant and added his fondant arms and legs and face and hat!     I initially planned to do his hat out of rice cereal treats and cover them in fondant but it was sort of a pain so I ended up making it solid fondant. 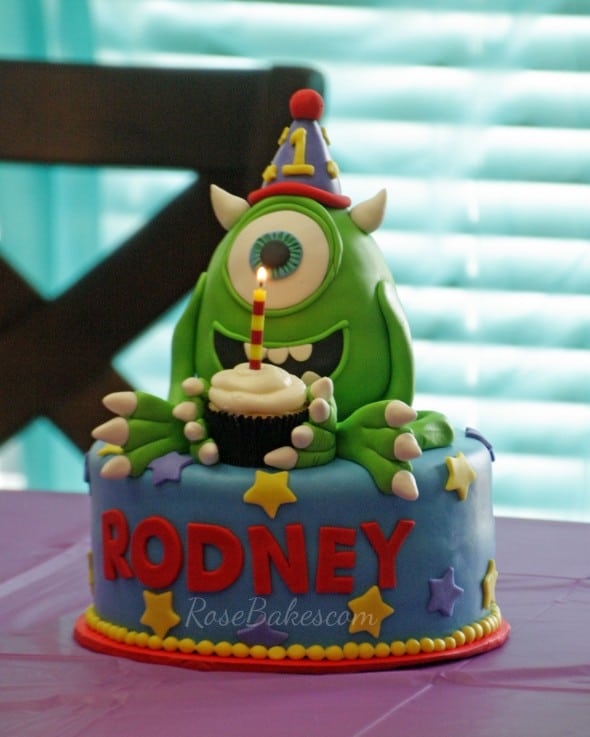 I added a real cupcake to the cake for Mike to hold and we put a candle in it so that Rodney could blow it out!! 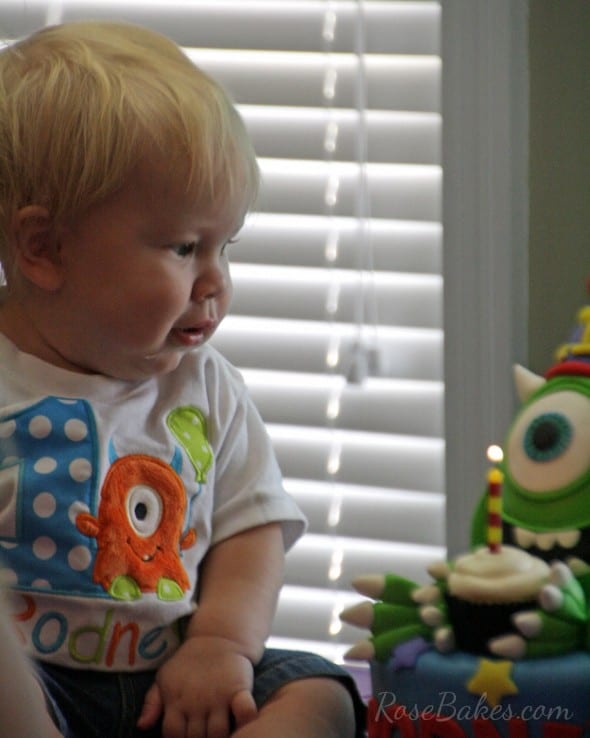 I have lots of nieces and nephews and I really don’t have a favorite (ahem!), but I call Rodney my little cupcake… 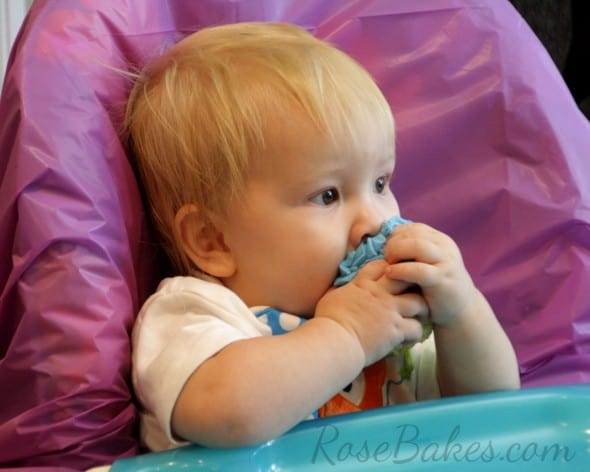 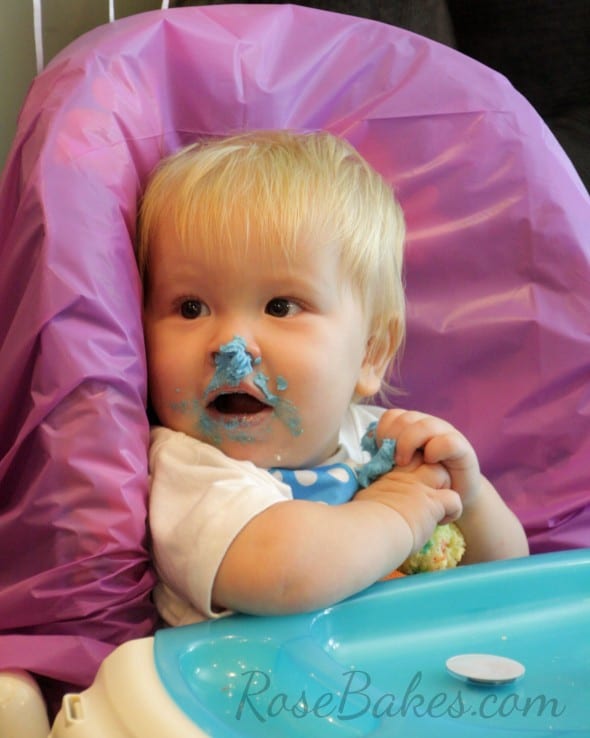 … even with blue frosting up his nose, he’s just precious!! 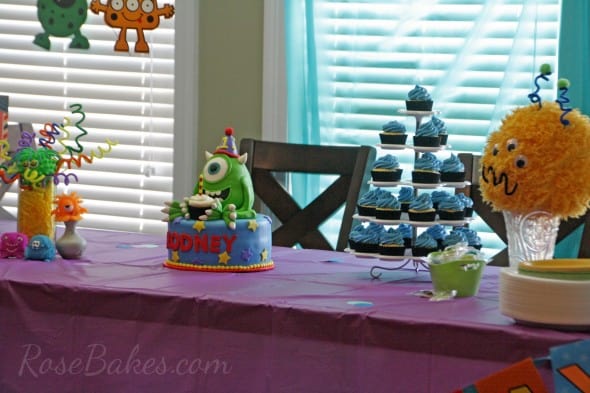 I almost forgot about the cupcakes… you can see them in this picture!  I had lots of extras that weekend from other orders, so I took them to Rodney’s party and Amy put them on her cupcake tree!

At the end of the party, I was walking by the table and I got a couple of pictures of what was left of the cake. 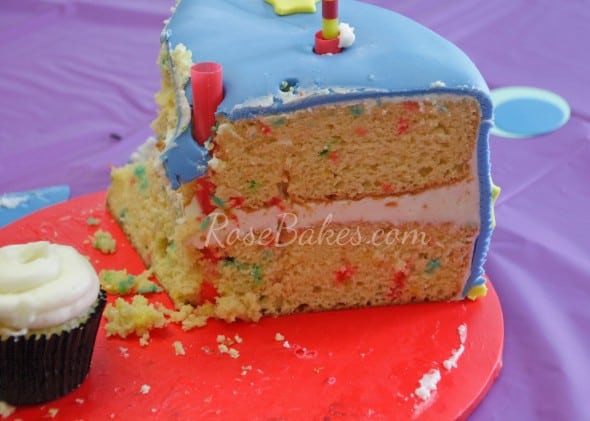 There wasn’t a whole lot left of the bottom tier, but poor Mike… even though he didn’t get eaten, he was um, 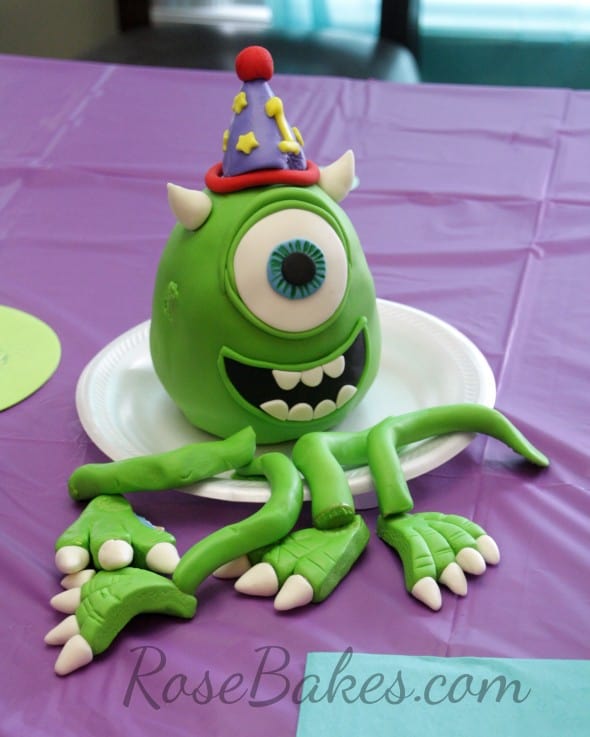 … dismembered?   If I remember correctly, he was put out of his misery later!  hahaha!

And that’s it!  I’m so happy that I finally shared Rodney’s party with you!!  At least I got it posted before I did his cake this year, right?  :-p

Do you have any questions about this cake or the party?  Leave me a comment and I’ll do my best to answer and help out!