Well, I finished out 2017 with a bang!  I booked a huge 6 tier buttercream wedding cake plus a 3 tier groom's cake for the evening of December 30!  But it didn't exactly work out as planned.

A New Years weekend wedding cake was not something I'd ever done (that I can remember) and normally I turn down orders around the holidays.  In fact, I had only taken six other orders for the entire months of November and December.  But I was excited about the designs for both cakes and I love a challenge so I just had to say yes!

Anyway, leading up to the wedding was a rough few weeks.  In the span of a month (in addition to moving into our new house), my entire family had the flu, then 3 of the kids got the flu again plus strep throat.  This Mommy was tired.  And stressed.  And did I mention tired?

6 tier buttercream wedding cake ... or not. 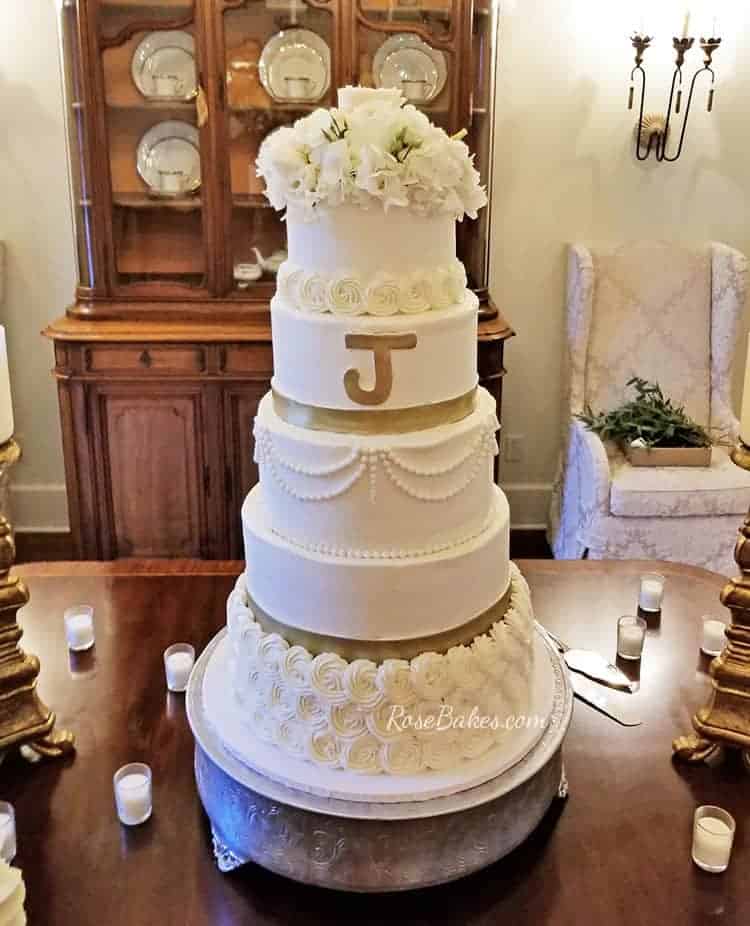 So when this big wedding week rolled around, the first thing I did was plan to do the cakes at my old house.  I have two ovens there and lots of counter space.  The new house is in desperate need of a kitchen remodel and with only one tiny wall oven and tiled countertops (re: grout lines everywhere), I knew doing the cake work here would be difficult, if not impossible.

But baking out there at the old house was also challenging.  While I thought I had left all of my baking supplies out there, of course there were things that I didn't think I'd need that were moved.  I also didn't have snacks there (doh! we moved all of our food) and I was there for a solid 11 hours the first day just baking...

Needless to say, I survived, but it was a long day. Anyway... fast forward and the next day I spent decorating all day.  Most of that time was spent torting, filling, and stacking cake after cake after cake.  Then I also covered the groom's cake tiers in fondant.  After another 12+ hour day of working, I crashed, afraid of how much work I still had to do. 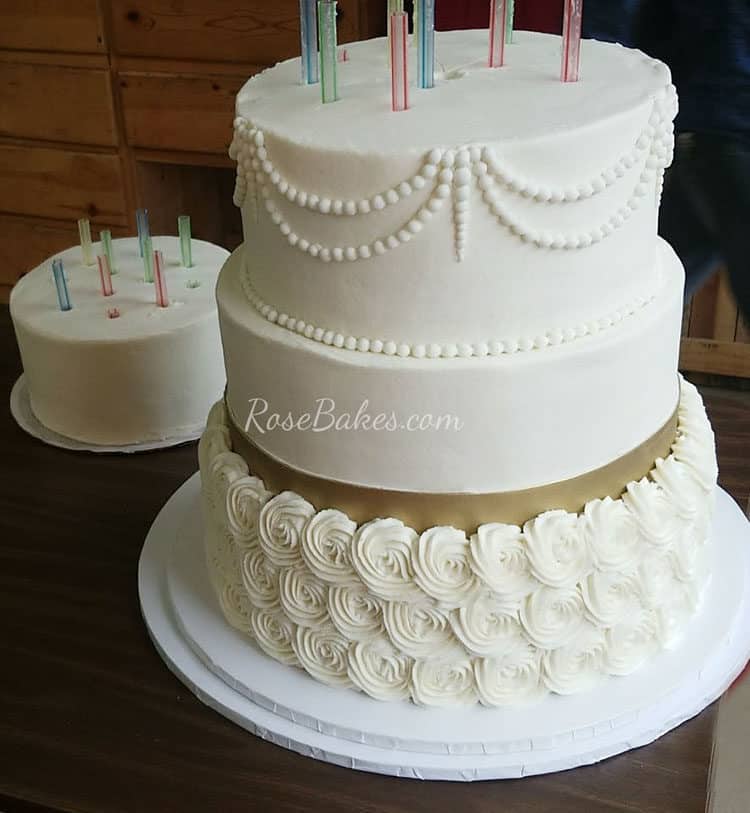 I slept (what seemed like only a wink) and it was wedding day!  I woke up and immediately started by frosting and stacking the bottom 3 tiers of the wedding cake.  At this point I asked my husband to move the cake from one table to another.

Um, no.  We realized I wasn't going to be able to stack up more than the bottom 3 tiers.  It already weighed around 90-100 pounds and he was barely able to lift it and carry it.  Uh-oh.

So I finished the top 3 tiers but left them on their individual cake boards (not stacked), then popped them in the freezer.  I was hoping having firm cakes would make it easier to move/stack them later.  And last, I began the tedious work for finishing up the groom's cake.

First I stacked and doweled the tiers.  The mother-of-the-bride (MOTB) had requested that they be "tall" tiers so they each had an extra layer of cake and frosting.  Even with just 3 tiers, it was also an incredibly heavy cake when all stacked up.

The design was based on the groom's three most favorite sports teams and the logos requested (especially for the top and bottom tiers) were quite detailed.  With the help of my hubby and my daughter - we got everything done and before I knew it, it was time to leave for delivery.

I was nervous.  And that's the understatement of the year.  I've done a handful of five and six tier cakes but none with buttercream like this and gosh... I was so, so worried about damaging them.

So we arrive at the location (the bride's parents home) and it. was. stunning.  Easily one of the most beautiful properties and homes I've ever seen.  I felt out of place (I'm almost always the most under-dressed person in the room) ... and a little unsure of myself. 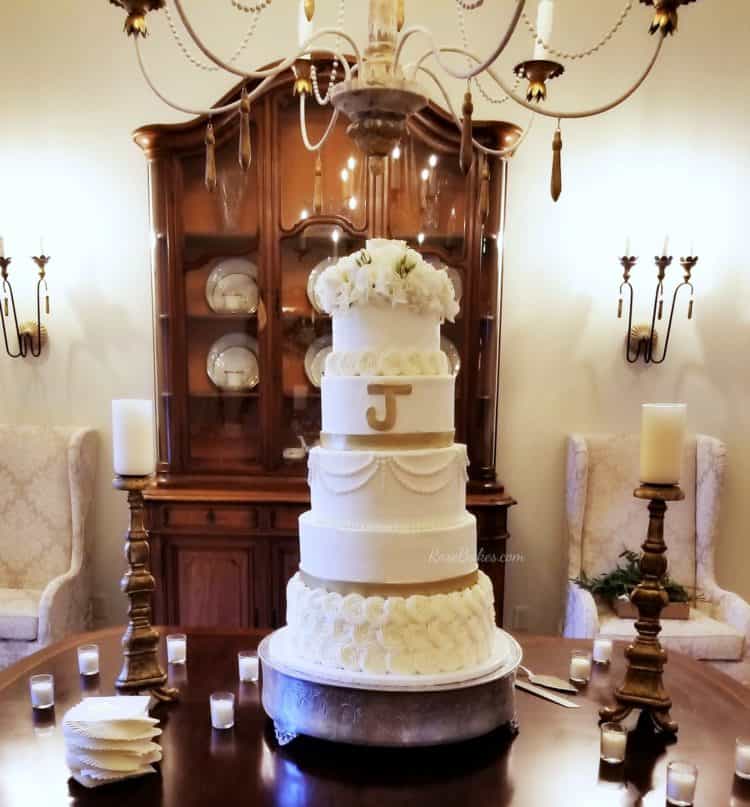 But deep down I knew we could do it and the cake would be gorgeous in this amazing setting.  So first the hubby and I carry in the groom's cake - then all the tiers of the wedding cake.

Working together (and with an audience of guests and members of the wedding party), we started assembling the wedding cake.

Let me pause here and say:  this is why I never assemble on site.  Having people watch me work is my worst nightmare.  What if I stick a finger in the cake with people looking?  What if I drop something? or it's leaning?  or ... you know... all the bad things happen??

But thank God my husband is my rock and he kept me calm.  He talked to me and helped me focus on my work and not the people watching and wandering in and out of the room.  Until we got to the top tier.

That's when one of the onlookers informed me that the top tier wasn't going to fit.  Huh?? 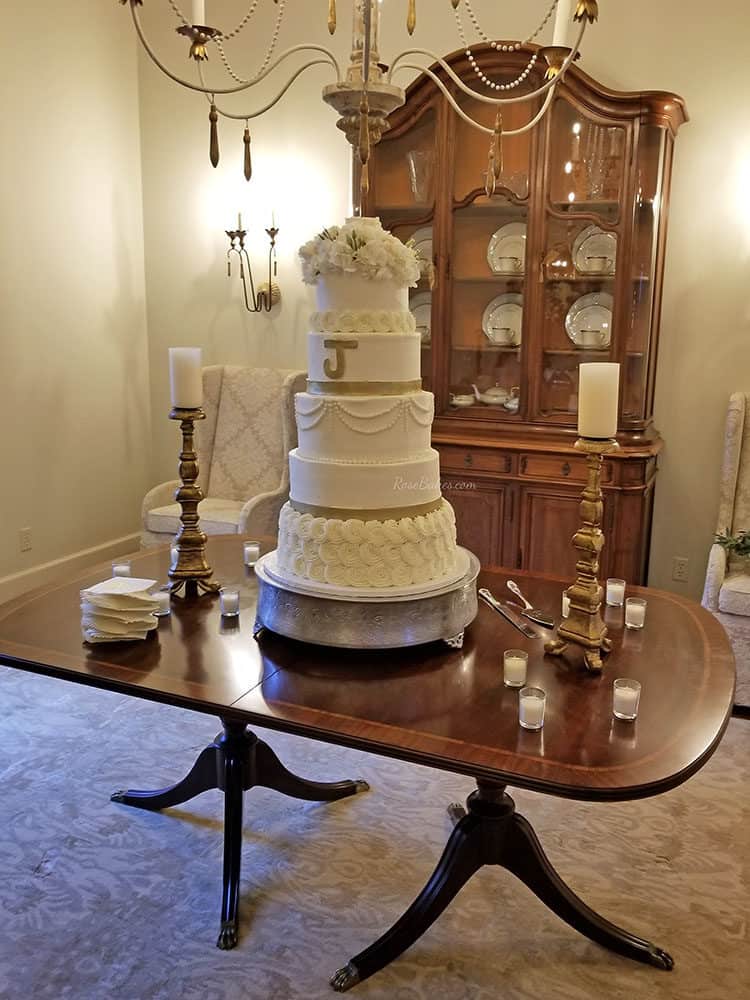 I was standing too close to the cake to realize it - but when I backed up, I knew she was right.  There was a gorgeous chandelier hanging in the center of the room and there was no way I could lift the top tier and add it to the cake without the chandelier being in the way.

And that didn't even take into consideration that the cake was to have a huge poof of flowers on top.  I felt sick.  Of course, this was not something I could've foreseen, but suddenly I felt very "on the spot" to solve this issue and everybody was looking to me for answers.

We debated moving the table, moving the cake stand (off center on the table), having the flowers touch the chandelier (or be all up on it) and the father-of-the-bride even offered to have someone grab a ladder and lift the chandelier and zip-tie it higher.

But after chatting it out with my husband, the bride's mother, the event planner and some others in the room, it was decided that the cake would just have to stop at five tiers.  I won't lie - I was disappointed.   The MOTB had sketched a beautiful design that she wanted for the cake.

I didn't want to disappoint her or the bride.

I had planned and decorated and worked so hard.  Selfishly, I really wanted to see the whole six tiers come to life.  But it wasn't meant to be.  And it wasn't about me.  They were okay with the slightly shorter cake so I needed to be too.  Besides, I had to figure out how to alter the design so it would still be as gorgeous as they hoped. 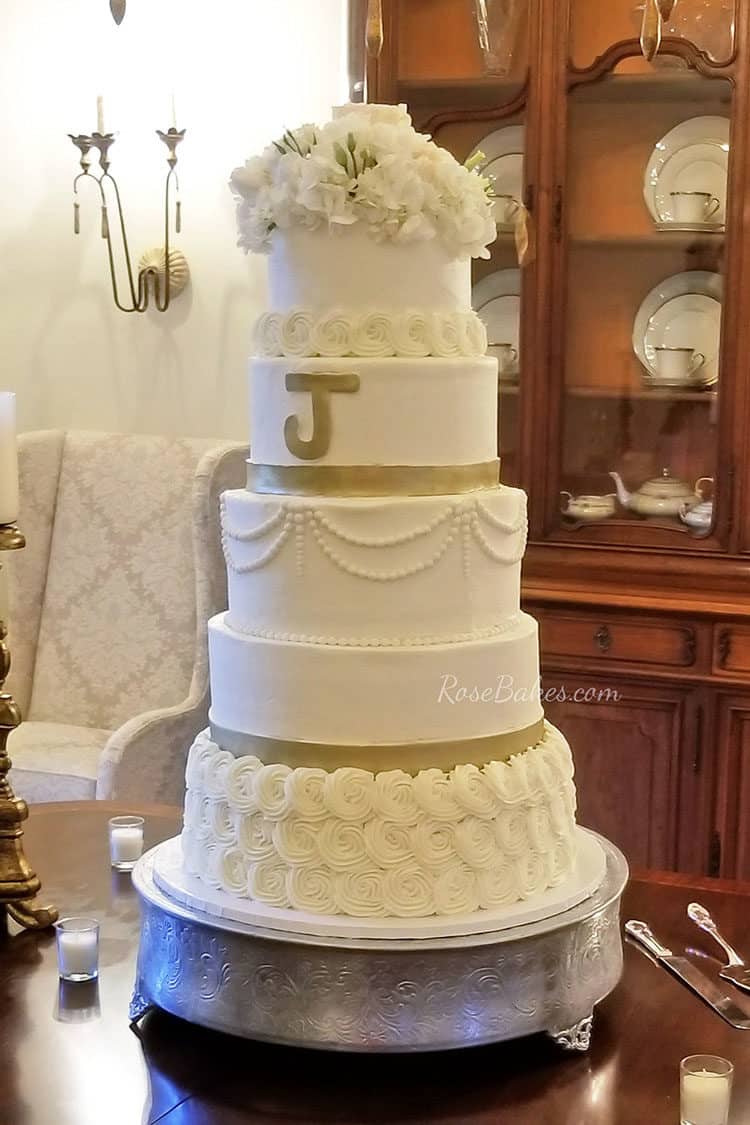 Since the cake was to have the block letter on the front and should've had 3 gold bands (on alternating tiers), I had to change it up a bit so the design was balanced and all tied together.  And still a show-stopper for this incredible wedding.  I had to change which tiers had a gold band - move the initial to a different tier, and come up with a new border plan for the top tier.

We spent way more time on-site working on the cake than I would've ever anticipated.  And later I realized that I forgot a thing or two.

For example...  I wanted to trim the "J" to make it more formal and block-like.  Since I was stacking and adding borders on site, I didn't put the "J" on at home and I didn't cut it too detailed because I wanted to see the placement on the cake, then trim it up and polish the edges a bit.  It was also supposed to have a gold pearl on either side... totally forgot those as well.

But in the moment and with the change of plans - these details totally slipped my mind.  I also didn't get half the pictures I wanted (or remember to check my white-balance on my camera... hence the horrible lighting) or leave my business cards with the event planner, as she'd requested.

Oh well... it was done.  The cake was there - it was beautiful - it was finished.  Ultimately it wasn't the dream of a  6 tier buttercream wedding cake that I had hoped for.  But probably no one knew that other than the ones in the room when the decision was made.

I certainly don't feel like it looked unfinished or incomplete and I was at peace with the work I'd done.  Later on I heard from the family and they were thrilled with the cakes!  If they're happy - I'm happy!

Now I'm anxiously planning for one last huge wedding cake on the books (next weekend).  Then I can get busy with this kitchen remodel!

A few details for you:

Did I miss any details that you'd like to have?  Leave me a comment and I'll answer if I can 🙂