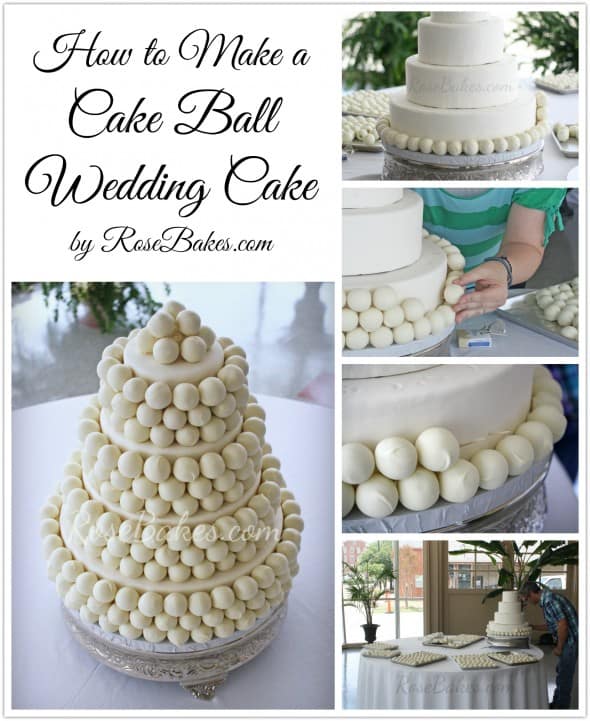 This might be the most unique wedding cake I've done to date.   My first (and only so far) Cake Ball Wedding Cake.

When I was first asked about doing this cake, I wasn't sure what I was getting myself into.  I loved the look of the cake the bride sent me as inspiration, but I had no idea how to bring it together. 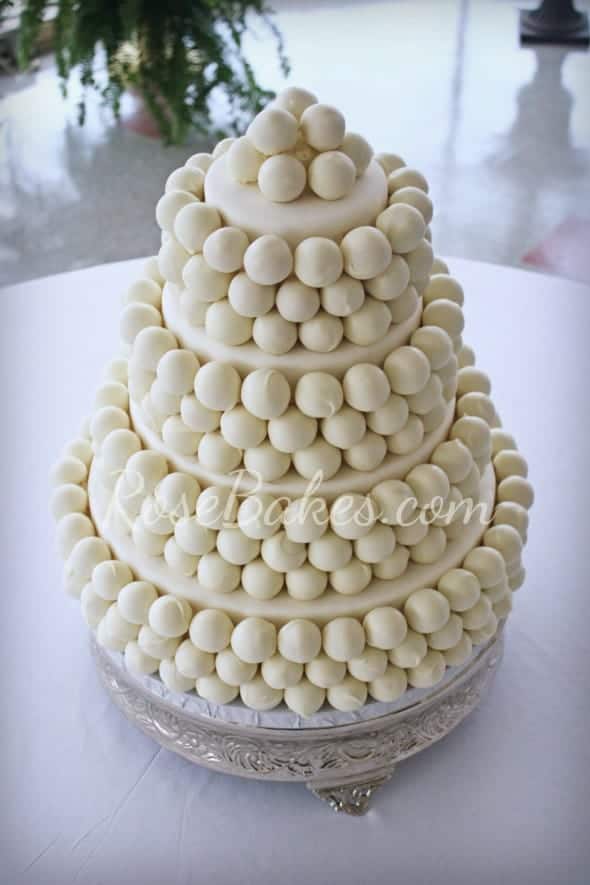 And honestly?  I didn't figure it all out until very late the night before.

We planned early on to have the "cake" underneath be dummy cakes, so I ordered the styrofoam dummies and the cake board and bought up lots of supplies to make cake balls. 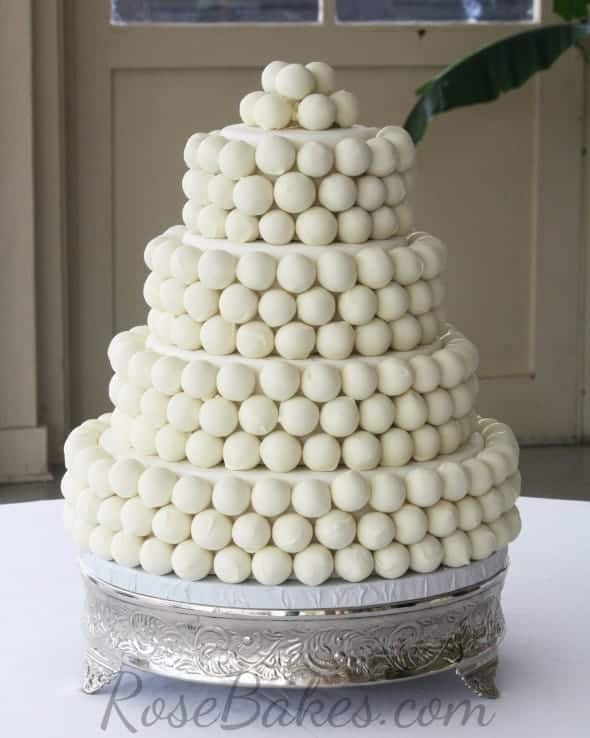 A couple of days earlier in the week, I baked several cakes and made the cake balls (see how I make cake pops here - except minus the sticks and I didn't dip them yet).   Then I stuck them in the frig to wait.

The day before, I made a few batches of homemade marshmallow fondant and covered the dummy cakes.   I used piping gel as "glue" to make the stryofoam dummies sticky so the fondant would adhere to them.

Then the night before - I started dipping cake balls.  But sadly, I could not get them to look pretty at.all. 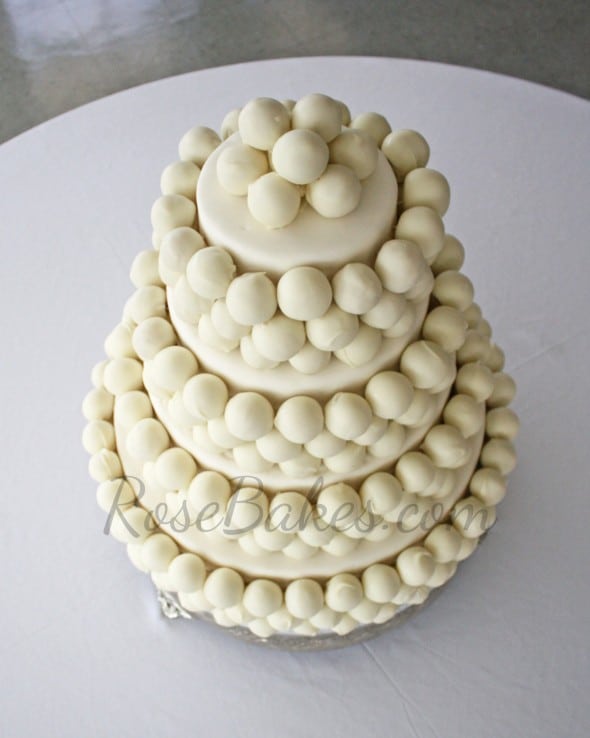 I was freaking out!  The cake balls were messy; puddling on the wax paper or having fork marks obvious on them where I tried to get them out of the chocolate.   I tried a few different things and then I started to panic - with only 15 hours before I was supposed to deliver the cake - I had no idea what I was going to do.

Then I messaged my friend Kristen and she suggested I try using lollipop sticks.  She said to just dip them like a cake pop, let them harden, and pull them off!  So I did... and WOW, it worked like a charm!  Praise the Lord for smart friends!! 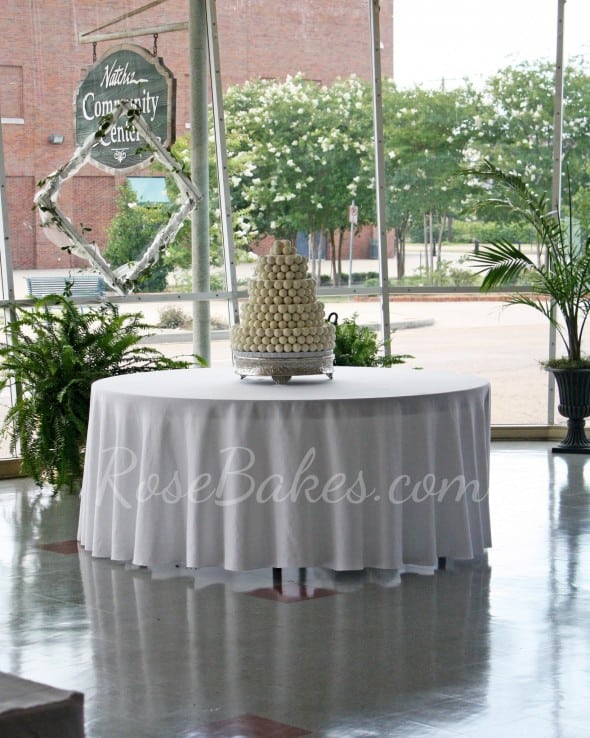 Unfortunately, it still took much longer than I anticipated and probably 6+ hours later, I finished dipping the 400+ cake pops.   And then I went to bed.

The next day, I knew I couldn't drive the 45 minutes to the venue with the cake balls attached to the cake (I had visions of them rolling all over my truck as we bumped down country roads), so I loaded up the covered cake dummy, the pans and pans of cake balls, and a thousand toothpicks (I didn't want to run out) and we headed out several hours ahead of wedding time to set up.

I normally don't go to weddings that early, but I didn't want to underestimate and not finish in time, so we erred on the side of caution and went very early!

Now here's the fun part... we took pictures of putting it together!

How to Make a Cake Pop Wedding Cake

We started out with the naked cake and the trays of cake pops... 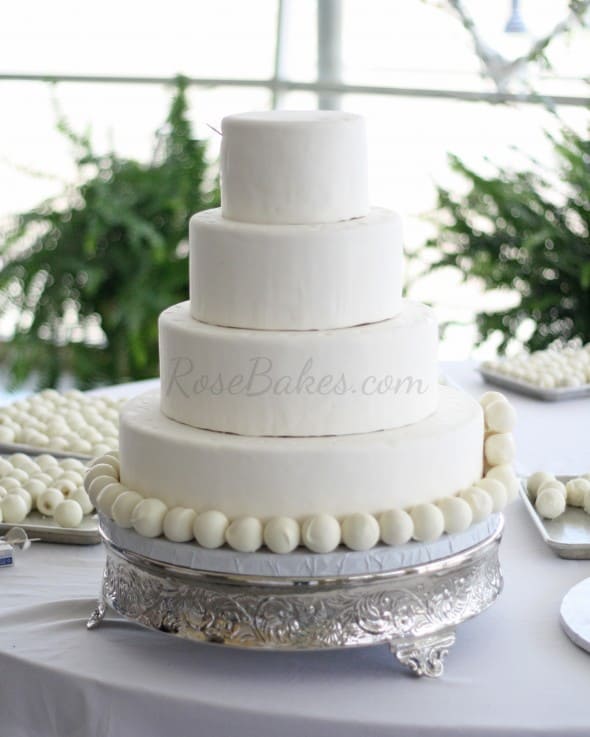 Okay, so we had already put a few on when I thought to take pictures, but you get the idea 😉  Here are all the trays: 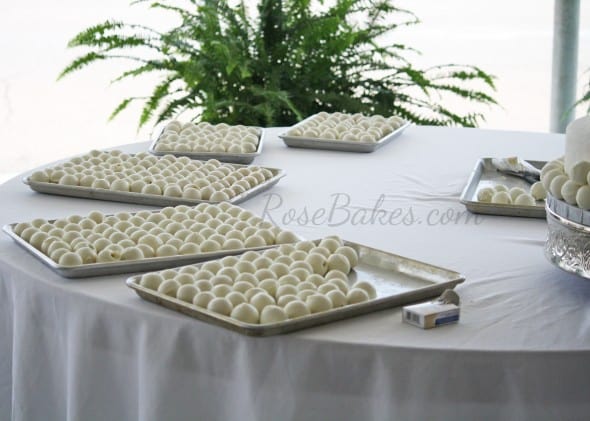 Anyway, so we went to work.  "We" referring to me and my husband.  He's a rock star cake assistant, by the way! 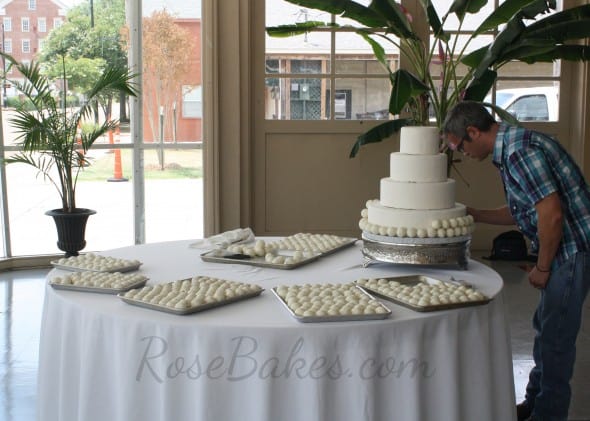 What we did is poke the toothpick into the cake/styrofoam, then push the cake ball onto the toothpick.  We used the "hole" that was created by the lollipop stick the night before so that we didn't crack the chocolate coating. 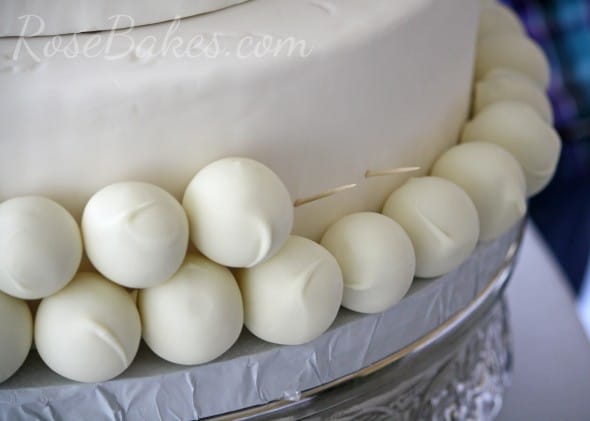 It was pretty easy to space them and "eye ball" the distance - and we staggered the cake balls on each row so that they stacked closer together. 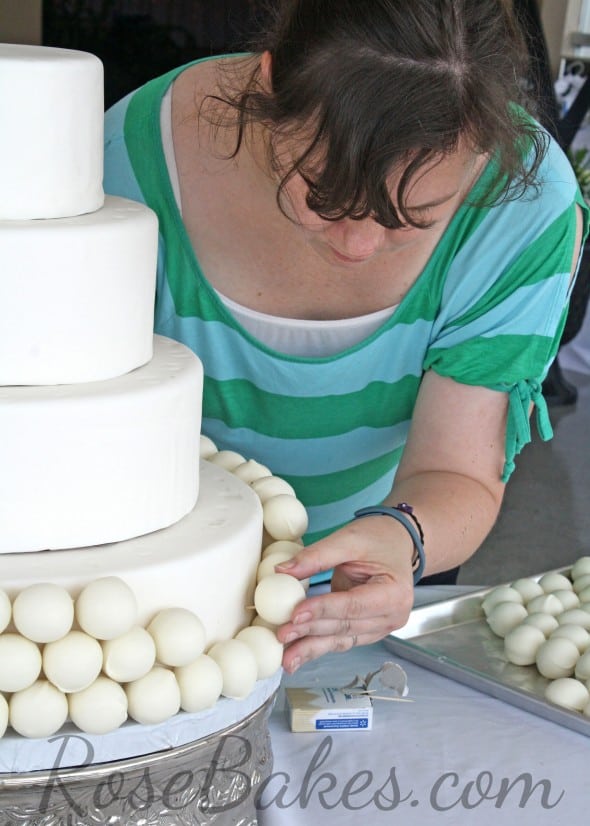 You can tell in that picture that I didn't stress at all over having the cakes perfectly covered underneath the cake balls.  I knew it would all be covered up - especially the bottom seams.

I had already done the math and had a fairly good idea - but I just wanted to be sure.  I knew once we were on site, there would be no way to make up for a shortage. 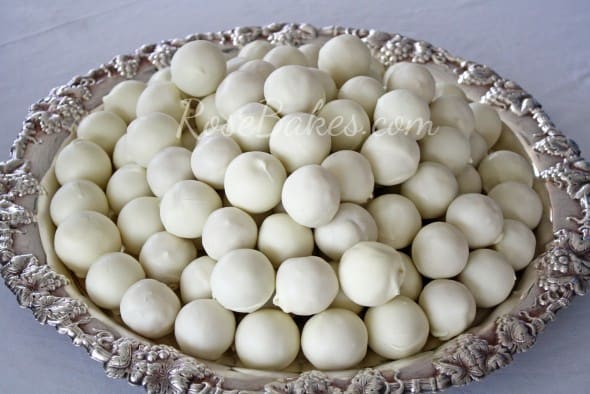 Clearly - we had enough!  Ha!  This tray was left sitting next to the cake with probably almost a hundred extra cake balls! 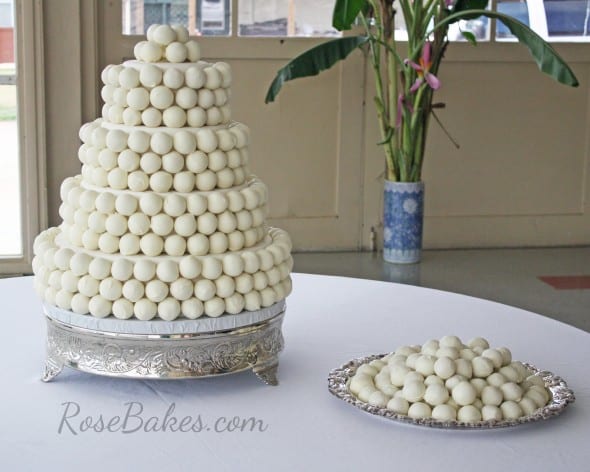 Anywho - if you're wondering, it only took about an hour (give or take - I don't remember exactly), for me and my husband to attach the 300 (ish) cake balls to the cake. 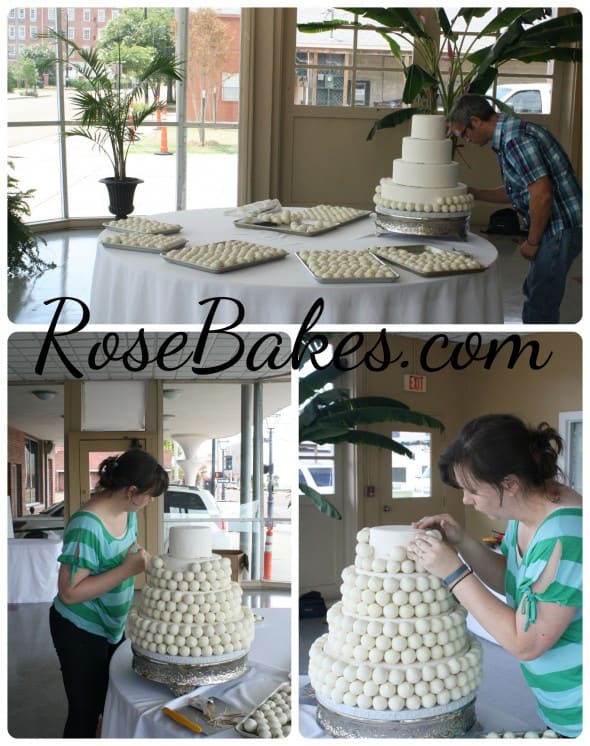 It really was easy to "assemble" and the cake balls felt really secure on the cake (more than I expected).    I wasn't sure what the plan was for the top of the cake, so at the end I used some toothpicks to put a few balls together as a topper - just to give it a finished look! 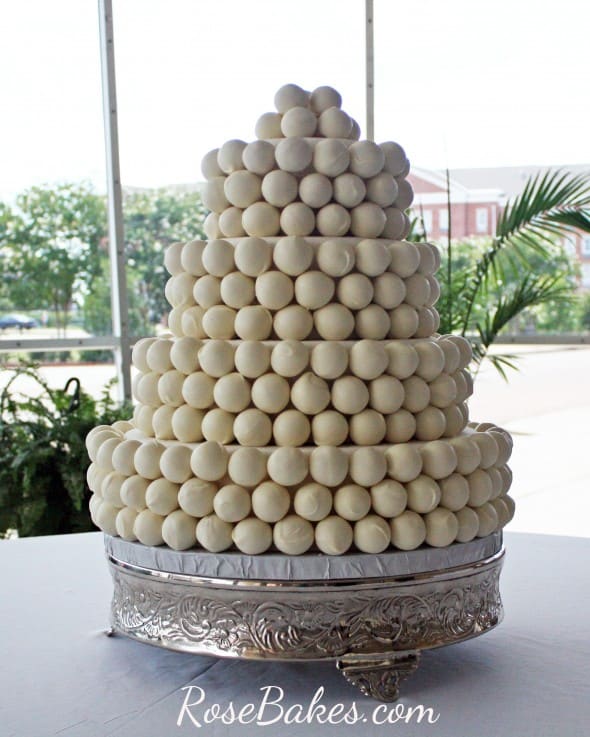 I snagged this pic from the bride on Facebook... they added some flowers on top and a few randomly placed between the cake balls... gorgeous! 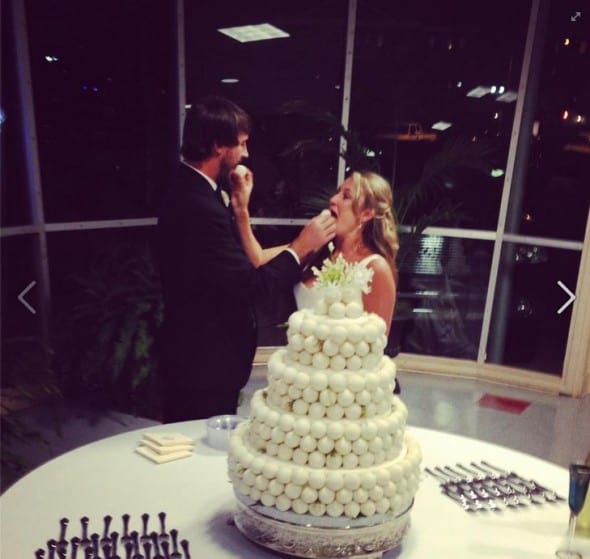 I was really proud of it when all was said and done - and confident that if ever asked to do it again, I could do it with much less stress!!

PS - wanna see the groom's cake that I made for this wedding?  I shared it here... go have a look at all those pics too! 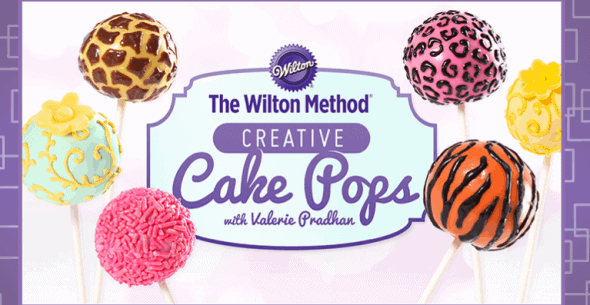 Do you want to learn more?  Craftsy has a FREE Creative Cake Pops Class (sign up here) and  I have a few more cake pop posts up if you’d like to check them out:

So what do you think of the Cake Ball Wedding Cake?  I know it's not everybody's style, but it's very unique and I actually loved it!  Leave me a (nice) comment - I'd love to hear your thoughts and/or questions!