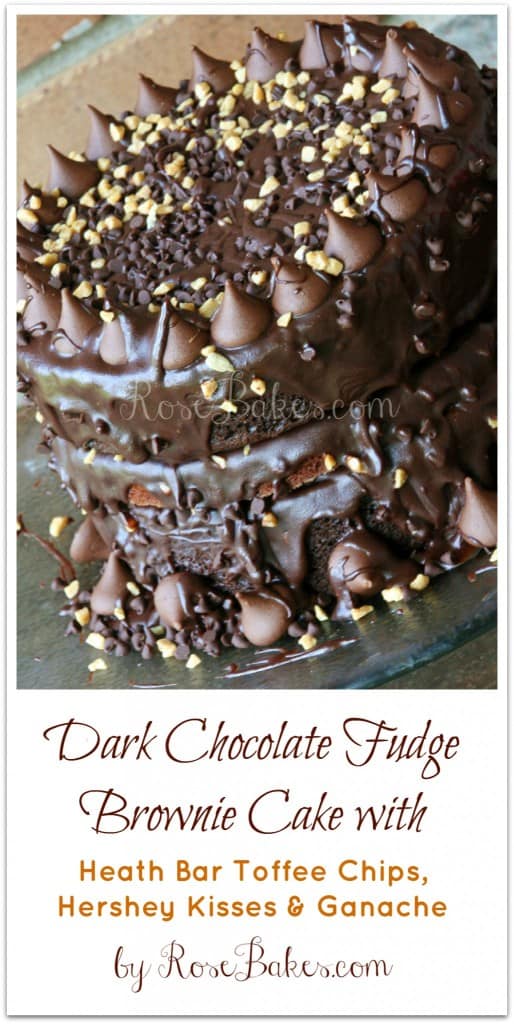 Dark Chocolate Fudge Brownie Cake with Heath Bar Toffee Chips, Ganache & Hershey Kisses.  Too much for a name?  Maybe... but I just couldn't decide what to leave out!  Ha!

What about "Death by Chocolate Cake" instead?  Would that be better?  😉 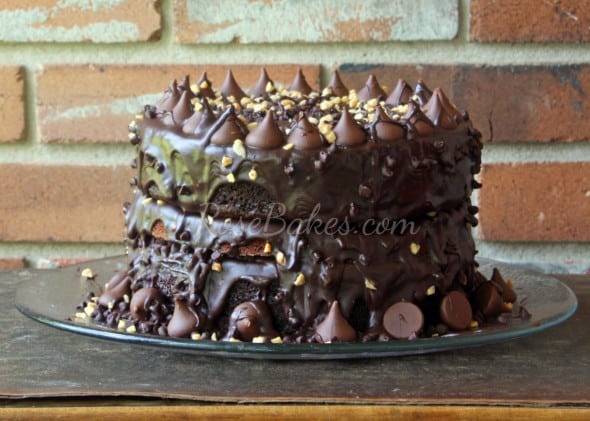 Soooo, a couple of weeks ago my sister asked me to make a very special, very chocolate cake for her coworker, Mrs. Debbie.  Mrs. Debbie also happens to be my very close friend (and running partner) Ashley's Mama... so I was excited about making it!

Amanda (my sister) asked me to ask Ashley (my running partner and Mrs. Debbie's daughter) what her Mama (Mrs. Debbie) would like and Ashley told me chocolate... anything and everything chocolate!   Do you have all that straight?  Okay, good!

I knew that Mrs. Debbie loves Hershey Kisses and keeps a stash in her desk and was pleasantly surprised to find out she also loves Heath bars (because I had already put the Heath Toffee Chips on the cake before asking if she liked them... oops!). 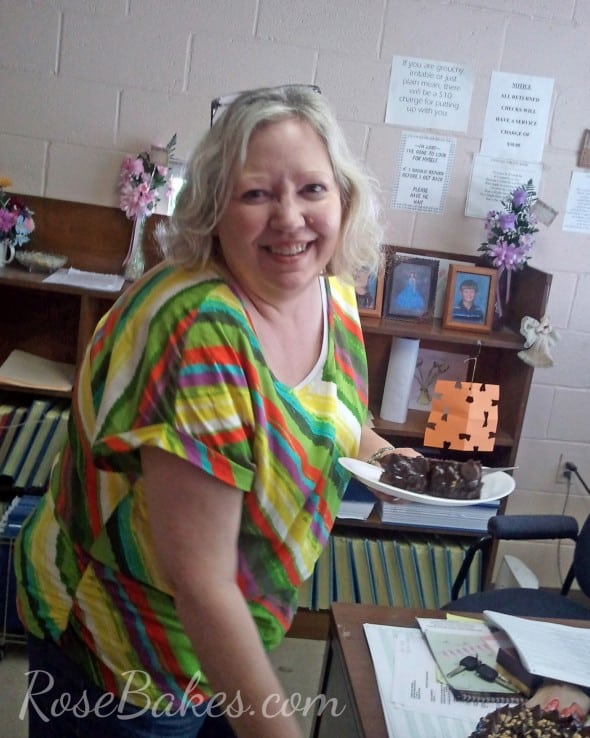 So I decided to make the most chocolate-y cake I could dream up and add in her favorite chocolate candy to boot.  And this is the resulting cake... and I think she liked it!

When I posted this on Facebook last week, some of you asked for the "recipe"... so here it is. 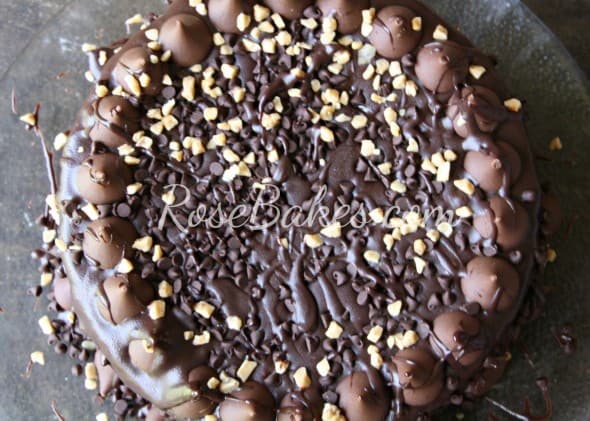 I started by baking two layers of dark chocolate cake with semi-sweet chips baked into the batter.    I used Duncan Hines Dark Chocolate Fudge Cake mix, but adapted it like I usually do.  You could easily just follow the box directions, but I always like to add a little oomph to my cakes by doing the "doctored" recipe!

So, I followed this recipe and added in ½ cup of semi-sweet chocolate chips.  I baked the two layers in 8" round pans. 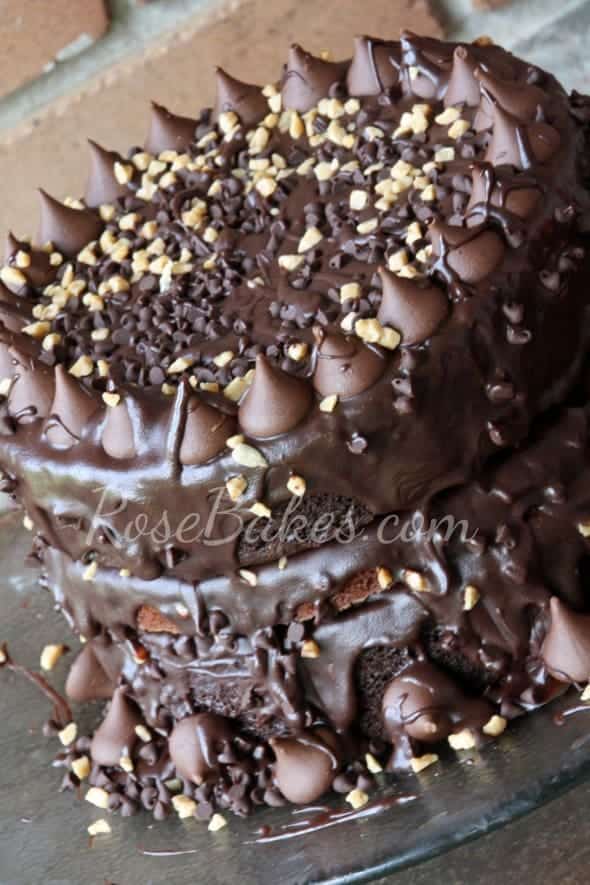 But "just cake" that seemed too plain for this chocolate challenge (and I had used the same starting idea for Ashley's birthday cake... check out the last pic in that post!), so I wanted to take it to the next level... what can I do, what can I do?

OH, I know!!  I'll add a layer of brownie in the middle!  Yep, so that's what I did.  I used a boxed Betty Crocker Fudge Brownies mix to bake a layer of brownie (also in an 8" round cake pan) and then I sandwiched that in between the cake!  Bonus... I had extra brownies leftover that I could eat!!

But how was it all going to stick together?  Ganache, of course... can you see it in the slice below?  You can see how I make ganache here. 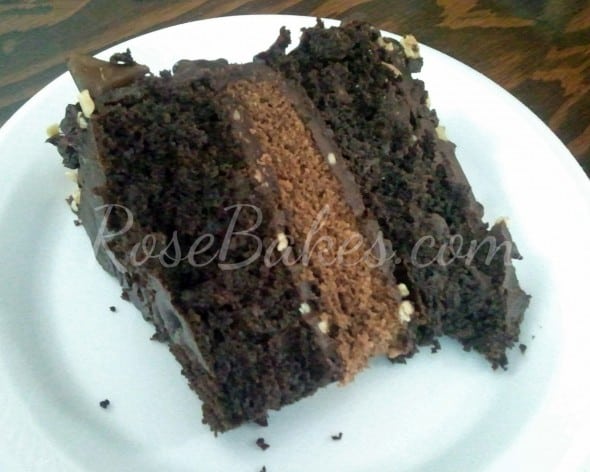 Oh... and knowing Mrs. Debbie's love for Hershey Kisses, I asked hubby to pick up a bag on the way home that day and I used those as my "border" for the cake!  When I had all that sprinkled and layered and piled on... I drizzled some leftover ganache all over and called it a done cake! 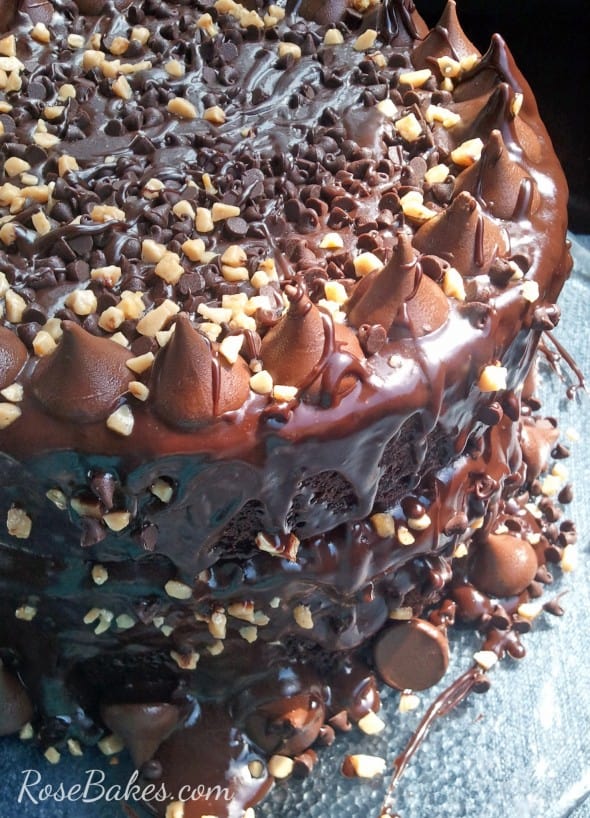 Oh... and just a note on some of these pics.

In true Mississippi fashion, it was at least 237° that day with 150% humidity (I may be exaggerating a tiny bit, but not much!), so the cake started to get condensation on it (or "sweat") as soon as I walked out of my house aaaannnnd I decided to snap the pics outside (they're always better outside) except my camera lens fogged up because it was so cool in my house and so hot and sticky outside.  So, a few of these pics are a little hazy and the cake looks awfully "wet", but that's just the nature of where I live. 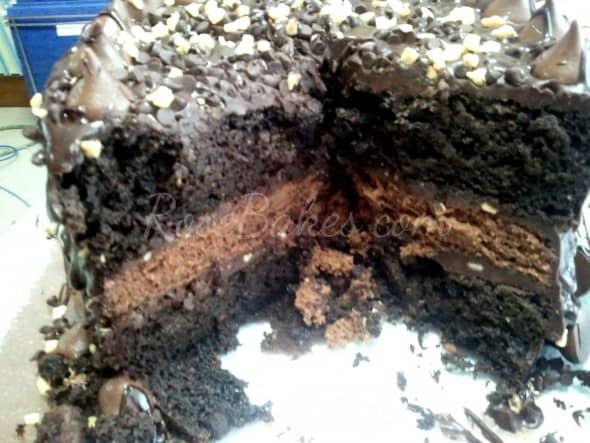 And for the cut cake pics... those were done with my phone when we dropped the cake off to Mrs. Debbie and she shared with us... yay!!! 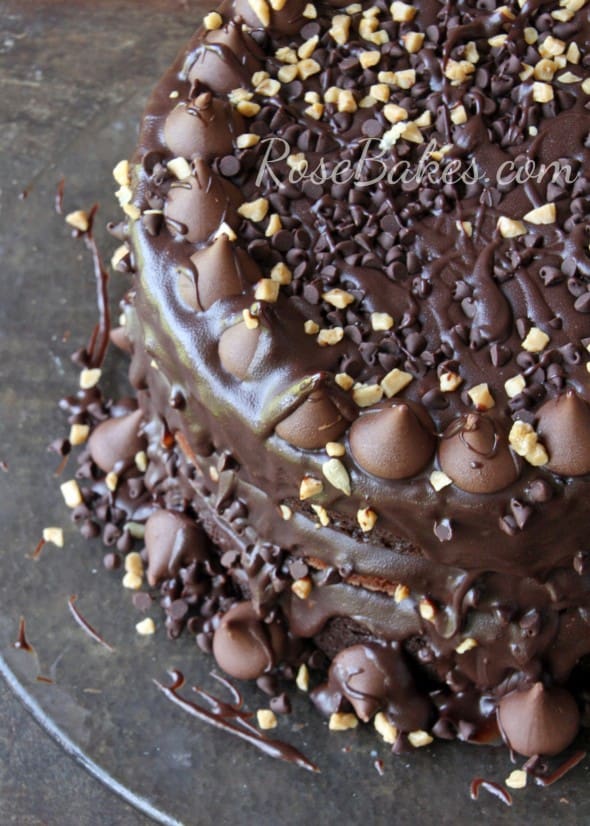 None of that really matters though... what does matter is that it tasted ah-mazing and I might just have to make one for myself in the very near future!!

Please check out these scrumptious recipes as well (I think I may have an obsession with dark chocolate and ganache!?):

What do you think?  Do you like (or LOVE) chocolate?  What about dark chocolate... and ganache?