Yesterday I shared with you that I had posted a tutorial on how to make a slice of watermelon cake topper.  Well today I want to share lots more pics of the Watermelon Cake and Watermelon Cupcakes that went along with it for sweet twin girls, Lillie & Emma's birthday! 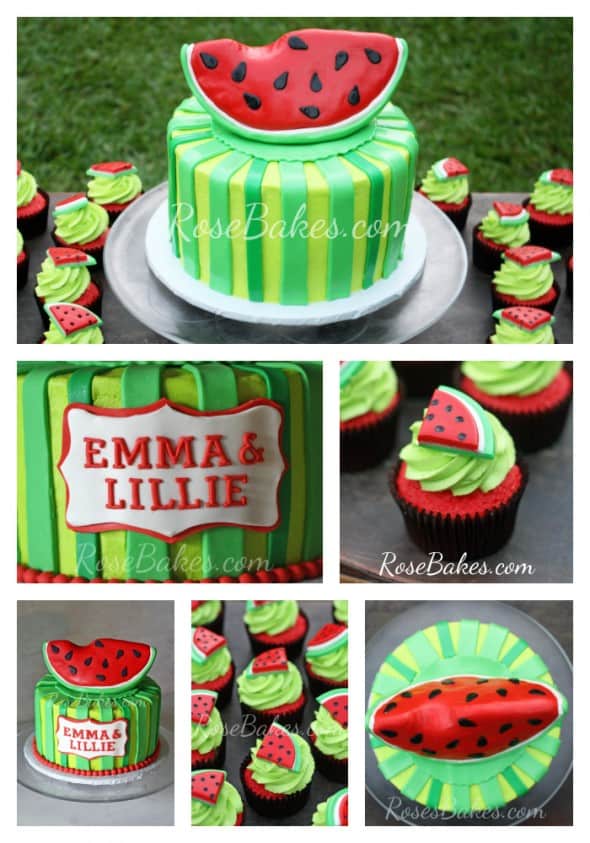 Emma & Lillie are the twin daughters of one of my dearest college friends and I was so excited about her theme! 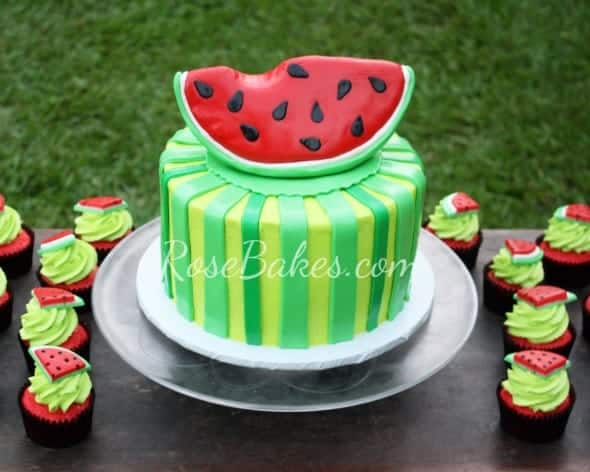 Down here in the south, nothing scream summer more than a big ole slice of watermelon - so it was perfect for a summer birthday bash! 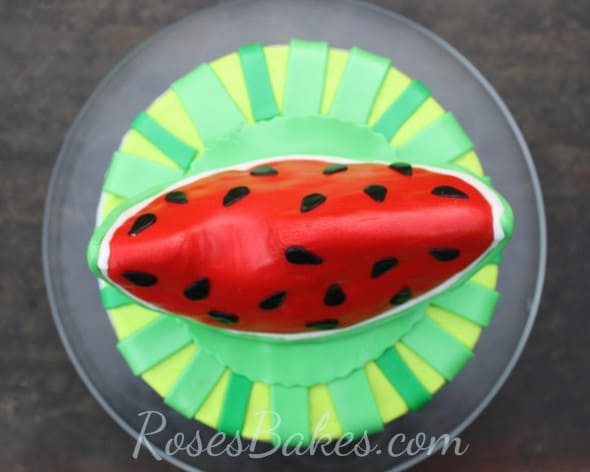 So here they are.  First I need to explain something.   Lots of these outside pictures were taken late in the evening when I thought I was finished with the cake.  I wanted my pics to be a little different than usual so I tried something new.

But then, later that night when I was looking at the cake - it just seemed incomplete.  I messaged my friend Ginnie to ask if she wanted the girls' names on the cakes and she said yes, so I went to work to try and give the cake a more finished look...  I just wish I had thought to photograph the finished cake with the cupcakes.  Oh well. 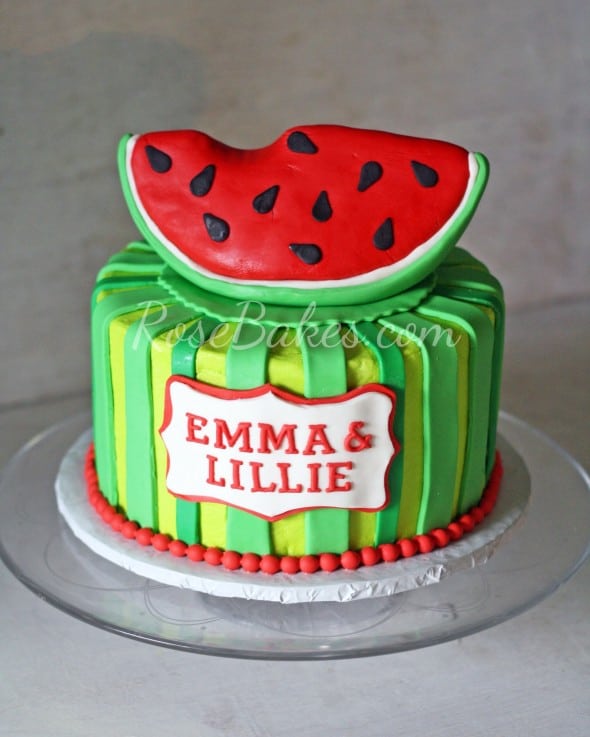 What do you think?  I used my pearl molds to do the red pearl border and then I used a plaque cutter from CheapCookieCutters.com to add the plaque with the girl's names. 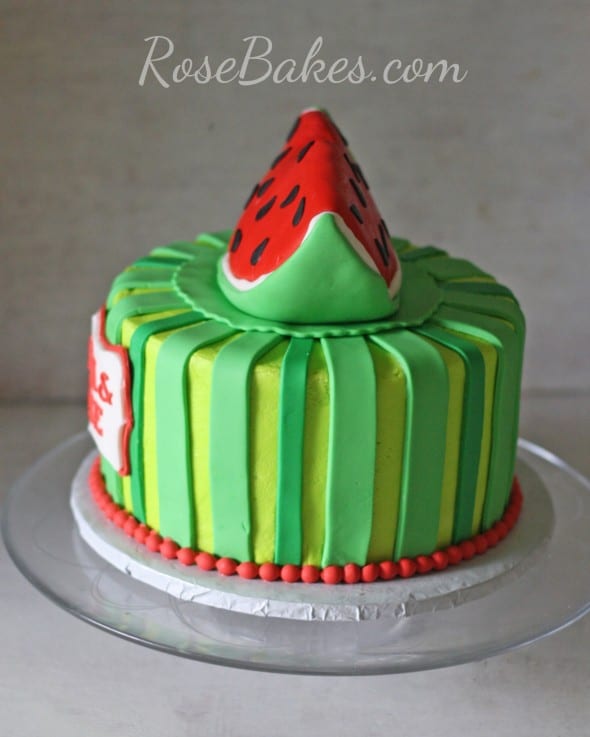 The cake was vanilla cake covered in lime green (or electric green) vanilla buttercream with homemade marshmallow fondant green stripes.  I cut the stripes with one of my most favorite tools... the FMM Multi Ribbon Cutter. 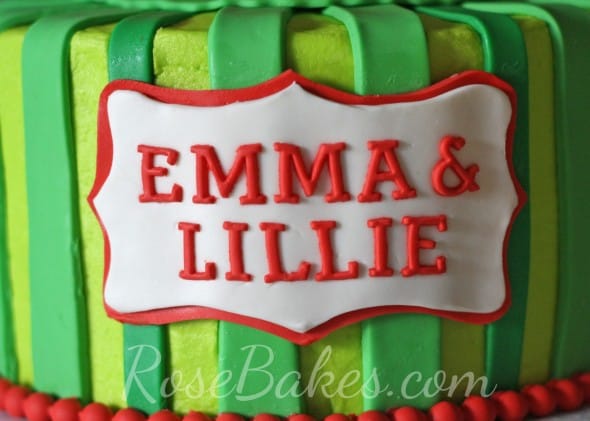 For the names, I used the Tappit Block Cutters.  I wish I had some tiny letters that were more girly but I didn't and my handwriting is awful when it comes to writing on cakes (in any form!). 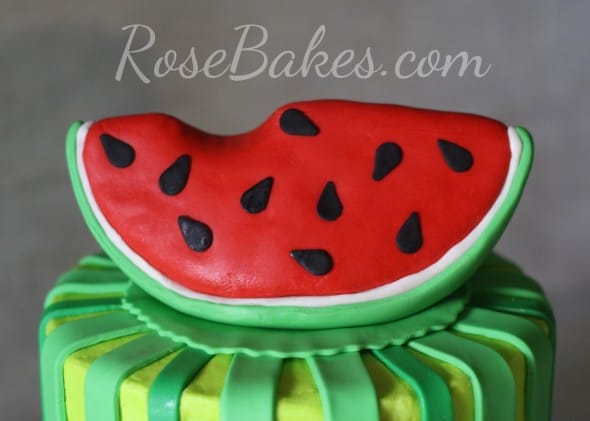 The slice of watermelon was made from rice cereal treats and again... you can find the link for my tutorial on how to make it here.  I used Satin Ice Red and Satin Ice Black vanilla fondant to do it! 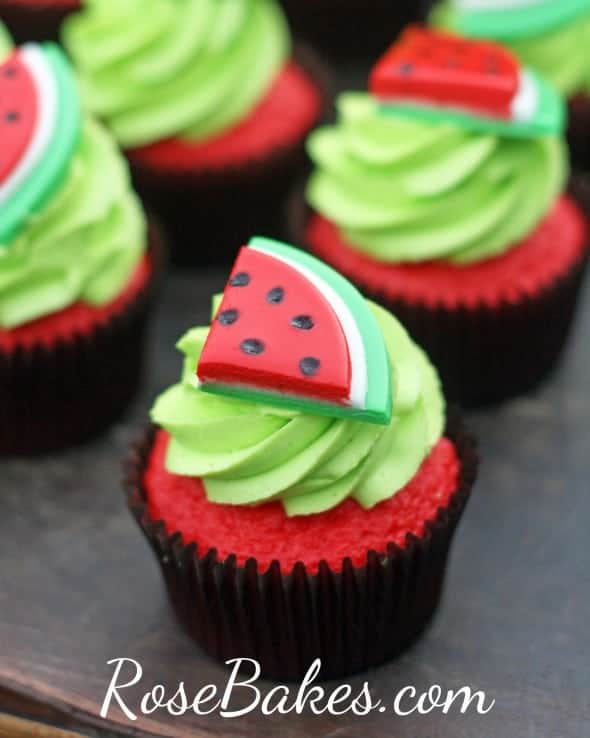 And now... the cupcakes!!  How cute are these?  They were inspired by some Watermelon cupcakes I found over on CakeCentral.com. 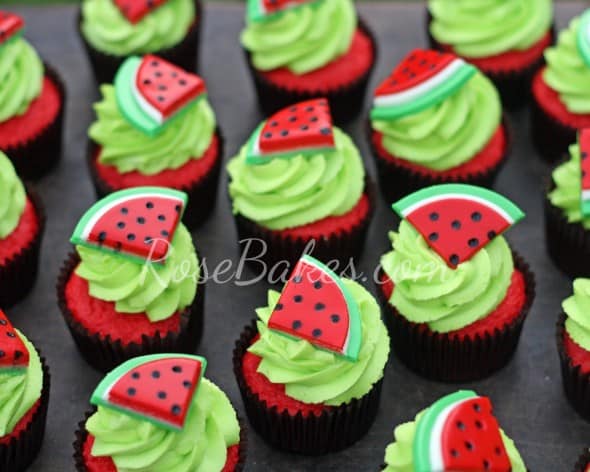 I baked vanilla cake and colored it red with Americolor Tulip Red gel coloring.  Then I topped the cake and cupcakes with electric green buttercream. 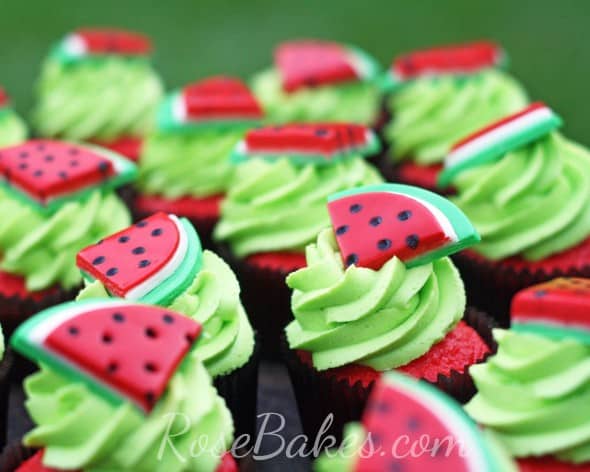 For the watermelon cupcake toppers, I cut out green circles from green homemade marshmallow fondant, then cut out a white circle one size smaller... then a red one even smaller.  I dotted them with a black food marker and then cut them into fourths.

I have a full tutorial for making the watermelon cupcake toppers here. They're so easy and super cute!

I also have a recipe/tutorial for making the watermelon cupcakes here.  Also - super cute and fun!  Very summery 🙂

And that's it!  Do you have any questions about this cake or cupcakes?  Please leave me a comment and I'll do my best to answer and help out!