Sometimes I just fall in love with a cake and this is one of those times.   When asked about doing this Winter Wonderland Ice Skating Cake and after seeing the cakes that Annalee liked, I just couldn't say no.

Maybe it's because as a young girl I secretly dreamed of being an ice skater (or gymnast) in the Olympics... or maybe it's because ice skating was always one of those dreamy things that I thought would be amazing but could never try (because I live in southern Mississippi).    Either way... ice skating is still one of my most favorite things in the world!

PS - I still love to watch ice skating and gymnastics on television (or in person), but I never realized those other dreams (obviously 😉 ).   And I actually did finally get to go ice skating... once when we lived in Idaho and then again last year here in Mississippi and I did enjoy it (although it was incredibly  hard).  As for that whole gymnast thing?  Not a chance. 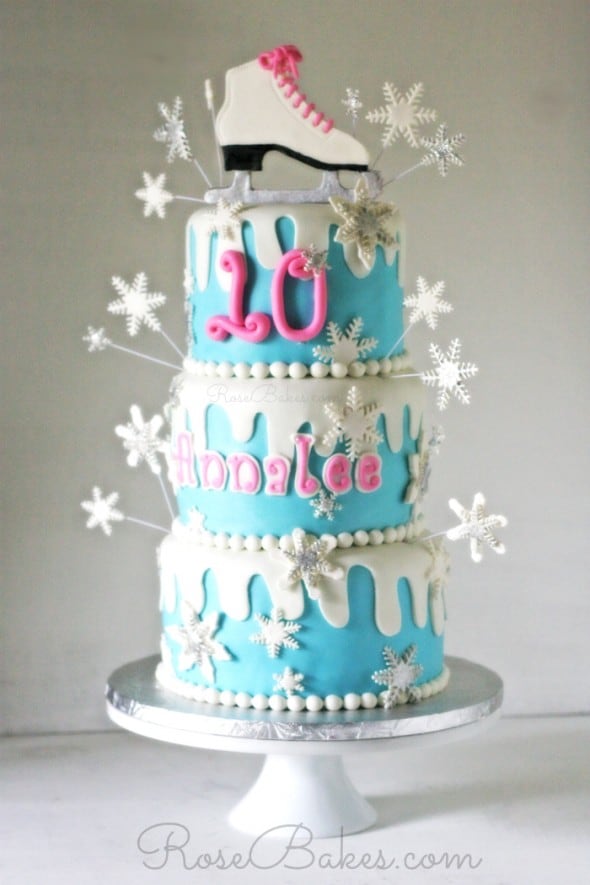 Either way... I loved doing the cake and was thrilled with the cake when it was finished!

Here are a few details for you! 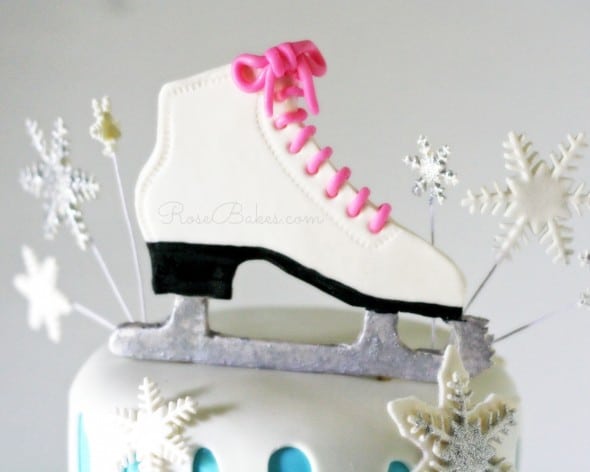 For the topper, I searched and found a template online for an ice skate.  I resized it to be around 6" wide (to fit the top tier of the cake).    To make it, I rolled out Satin Ice gum paste to about 2-3mm thick and coated it with a thin layer of shortening.

I laid wax paper over it, then the template, and cut it out with an Xacto blade.  I used a small round frosting tip to poke the holes for the laces and a stitching tool to get the details.  Then I allowed it to dry/harden for a full two days.

Once dry, I mixed black gel coloring with vodka and painted on the black shoe sole, then mixed sugar glue with silver luster dust and painted the blade silver.  For the laces, I used my extruder! 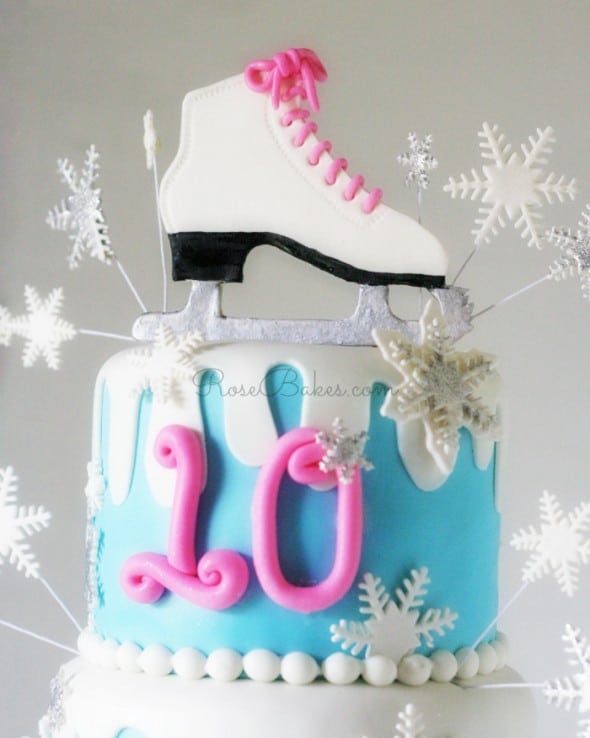 The tiers were 6", 7" and 8" round cakes.  I used this technique for doing a fondant overlay to get the snow-capped look on each tier.  I just cut the little waves much smaller and longer than the original tutorial.

For the "10", I did something similar to this method for making fondant number toppers - except I didn't put them on top 😉 ! 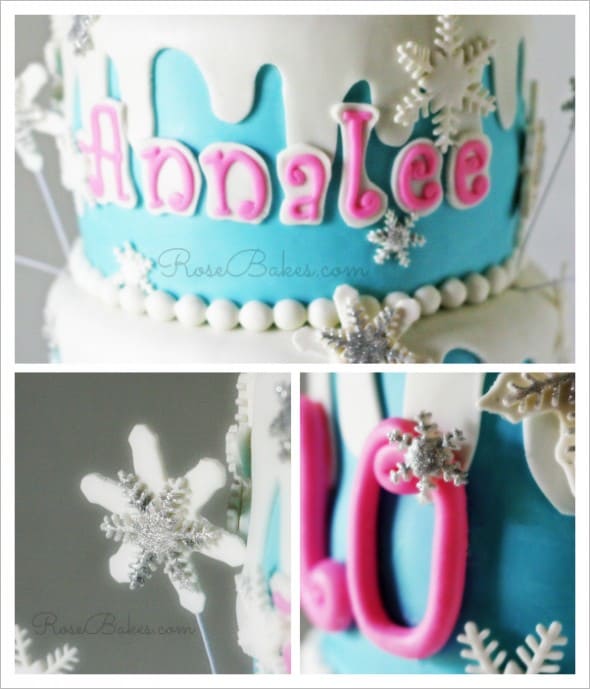 For all of the snowflakes, I used a snowflake plunger/cutter set and snowflake cookie cutters.  These were also made with gum paste and I allowed them to dry for a couple of days before "gluing" them to the wires with melted white almond bark.

You can see a few more details about how I add shapes to wires for cake here.  I also link there to the wires I prefer to use and show how I put them into cake.

I let most of the snowflakes remain white but for a few, I mixed silver disco dust with sugar glue and painted them so they'd really be sparkly and glittery! 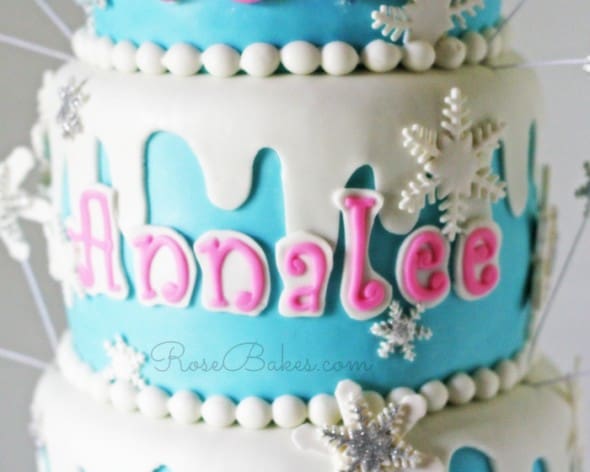 To do Annalee's name, I used my funky alphabet cutters, then laid them on white fondant and used an xacto blade to cut out a background.  I used my largest silicone pearl molds to do the borders! 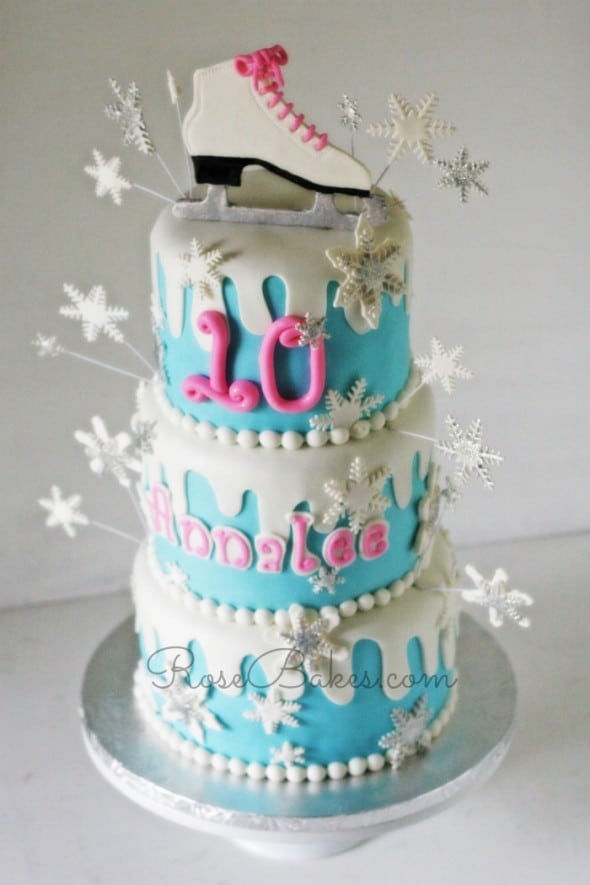 The flavors for the cakes were vanilla cake for the 6" and 8" tiers and chocolate cake for the 7" tier.  I filled and frosted all of them with vanilla buttercream, then used homemade marshmallow fondant to cover the cake and decorate (except for the gum paste snowflakes and ice skate).

I'll say it again... I am still in love with this dreamy winter wonderland cake.

Sooo.... what do you think?  Do you love this cake as much as I do (I really, really hope so!)?  Do you have any questions?   I love to hear from readers, so please leave me a comment or question!  xx