If you’re looking for a classic patriotic dessert, look no further than this Flag Cake with Raspberries & Blueberries.  This classic 4th of July cake design has been around for ages! I’m pretty sure it originated in a magazine, but up until now, I’d never made one. 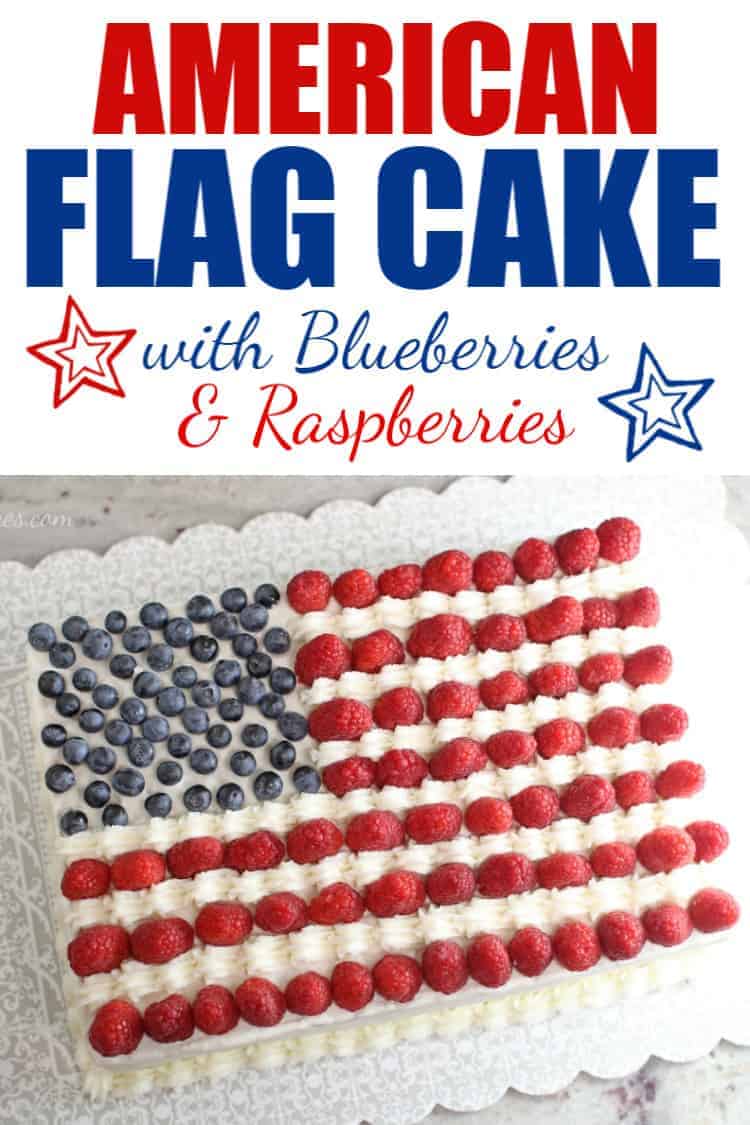 Well technically, I still haven’t made one. You see, my daugher Sarah made this cake for one of my clients for July 4th.  Sarah was invited to go to Youth Camp with a friend, but the invitation was last minute and she needed to quickly raise the money for the trip.

When my client called to ask if I could make this classic Flag Cake design, I knew it was a design Sarah could do, so I let her take the lead and she made the cake 99% on her own and I let her keep the profits.  Spoiler alert… she earned enough for camp!  She sold two Strawberry Cheesecake Pies, four and a half dozen Confetti Cupcakes, and this American Flag Cake. Plus she got some extra donations from a couple of my lovely customers to push her over the top!

So back to the cake. I gave her a few pointers about piping the white stripes and border (to get an even, classic shell border) and I helped her with the proportions so she’d be sure to fit thirteen stripes onto the cake.  Other than that, she baked it, filled and frosted it, and decorated it. 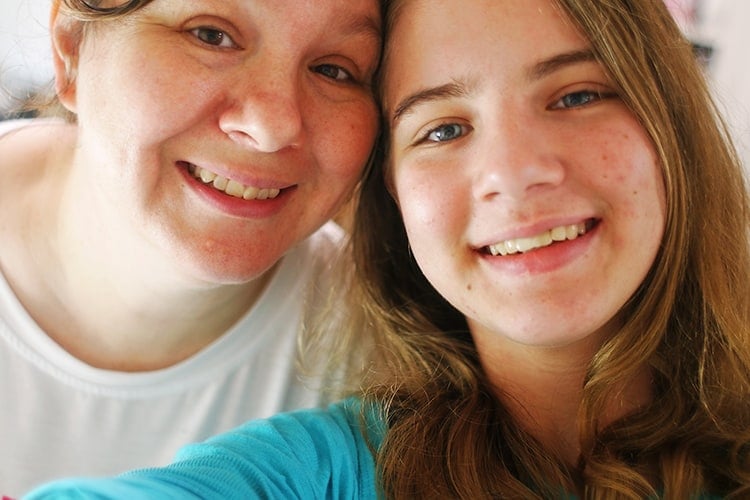 This Mommy is proud!!

I realize I’m too late on sharing this cake for the current 4th of July (which is pretty standard for me… to be late). But I still wanted to share while it was fresh on my mind. Next year, it’ll be primed and ready to go!  So here are the details… 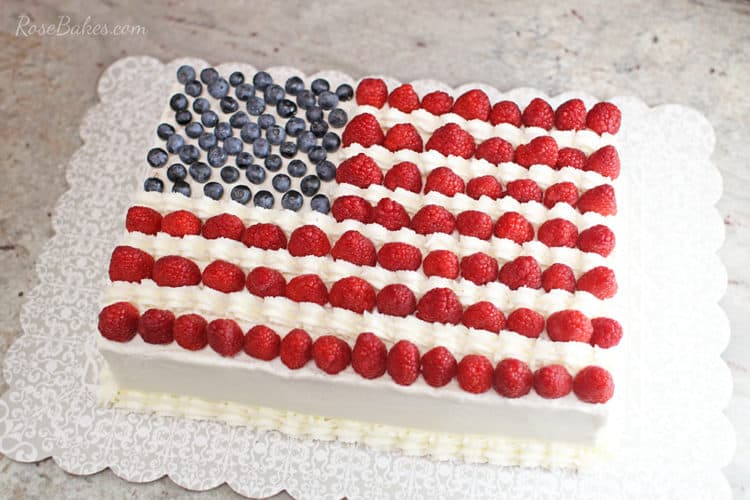 To make this exact cake, start by mixing up a double batch of this recipe –> White Almond Sour Cream Cake.   And a half batch of this Vanilla Buttercream.

Divide the batter in half between two 9×13 pans and bake until done, about 45 minutes at 325°F for me.  Use these heating cores in the center of your pans to get evenly baked layers.  Sarah barely had to trim them at all.

This was a last minute order and I was all out of nicer looking sheet cake boards (because I almost never do sheet cakes), so we had to use these cake boards from Walmart. Not my favorite, but I knew my client wasn’t picky so we worked with what we had.

Tools needed for this cake:

After cooling the cakes on a cooling rack, Sarah laid the first cooled layer on the cake board with the top side down, then spread a thin layer of raspberry filling over it.  She then stacked the second layer on top of that. At our clients request, we did not do any kind of buttercream filling. She didn’t want a lot of frosting in or on the cake.

Next Sarah covered the cake in a thin layer of vanilla buttercream. She did her best to cover the cake so it wasn’t showing through, but not do a “thick” layer. She smoothed the sides and top with a bench scraper and small spatula. I was so proud of how well she accomplished this!! 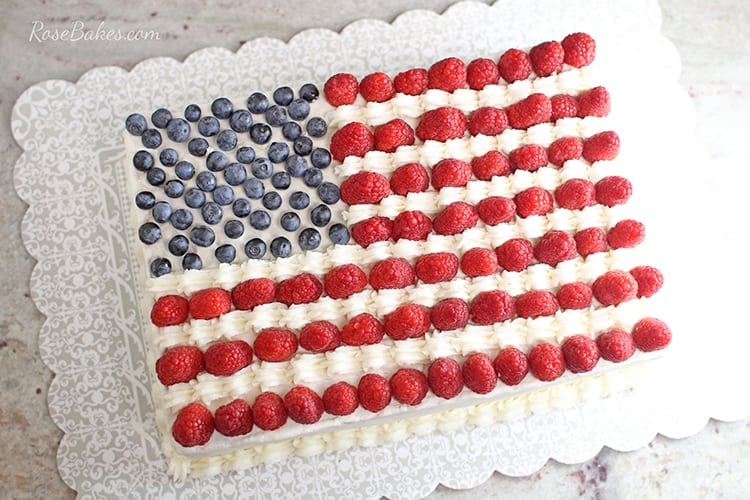 I helped her kind of line up and make little marks for each stripe and the “stars” area to make sure it would all fit.  I’m a bit of a patriot so I really wanted the stripes to be accurate; thirteen total, starting and ending with red.

I originally thought she should pipe fifty stars between the blueberries (they’re spaced so that it would’ve worked out right), but there just wasn’t room for them to look right.  So we just left the spaces and I think it looked great.

Then I gave her a quick refresher in piping even lines of shells and off she went!  She placed the blueberries first – alternating lines of seven blueberries and six blueberries… leaving spaces where there would be the fifty stars. The she started with a row of raspberries and the top, then piped a row of buttercream with an Ateco #843 closed star tip.

She did all the work by herself.  She created a beautiful cake! I was happy and our client was thrilled! The best part was Sarah earned a good chunk of her camp money 🙂

And that was that!!  Do you have any questions about this cake?  Leave me a comment!