This Tutti Frutti Cake is perfect for a cheery, summer birthday party!  From the watermelon and pineapple tiers to the fondant strawberries and glittery board - it's the perfect cake for any Tutti Frutti Party!

A few weeks before our trip to Mexico, I realized I'd made a huge mistake and taken an order for this Tutti Frutti Cake for the weekend we were going to be gone.  I was horrified to say the least. 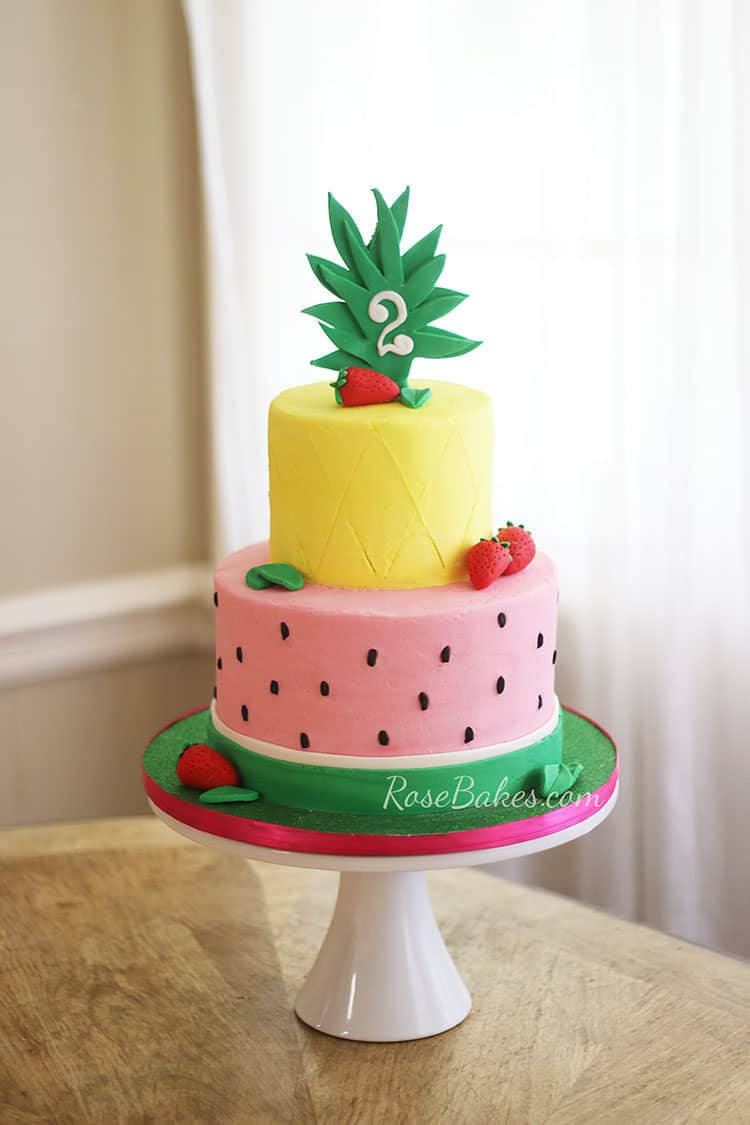 Thank goodness I discovered my error as early as I did, and I had a very understanding client.  She's such an amazing client that she didn't let my scheduling error deter her from wanting me to do the cake. 🙂

So after a little research and determing what I hoped would be the best way to handle the cake, we pressed forward with the order.  Here's how it all went...

I've written a post before about freezing a fondant decorated cake (read it here), but this one would be different because it was buttercream.

Her party wasn't until Saturday - my flight out was on the Wednesday before (at the crack of dawn).  I knew I had to finish the cake no later than Tuesday afternoon. But I wanted to bake it as late as possible. So I ended up baking the cake late Monday and chilling the layers overnight. Then Tuesday morning I decorated the cake and boxed it up and froze it (without any plastic wrap).

While it froze, I made all of the fondant decorations (the pineapple topper, the strawberries, the leaves, etc.).   Then just before we left for the airport (it's 2+ hours from here and our flight was pre-dawn so we spent the night before in New Orleans in a hotel near the airport), I got the frozen (solid) cake, out of the freezer. 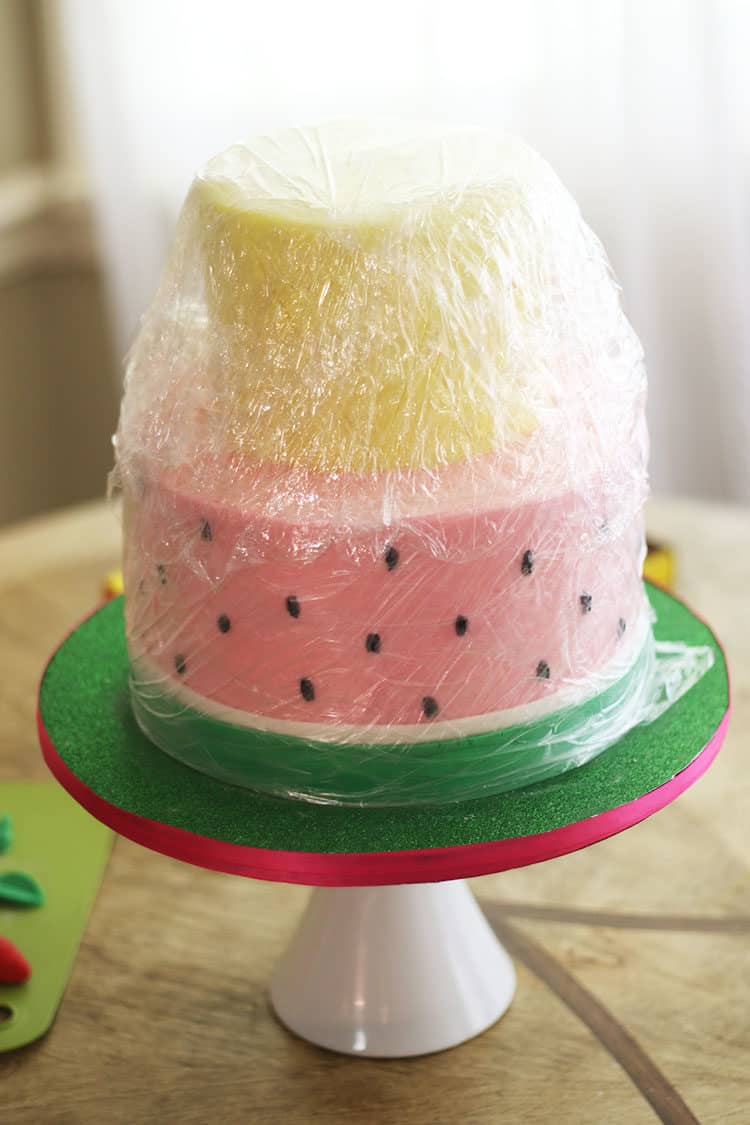 I ended up wrapping 3 layers of heavy duty plastic wrap all around and over the frozen cake. Then I put it back in the box, taped it shut, and put the whole thing back in the freezer.

On Wednesday evening, she picked up the cake from my kids and took it straight home and back to the freezer.

I'm not 100% sure how she handled it, but I suggested leaving it frozen until Friday afternoon and then moving it to the frig without unpacking at all. Then on Saturday, unwrapping it from the plastic wrap and letting it come to room temp at least an hour or two before the party.

Then adding the decorations back.  I was completely off the grid while in Mexico, but I was thrilled to see the notification when I got back in the States where she'd posted the cake on Facebook: 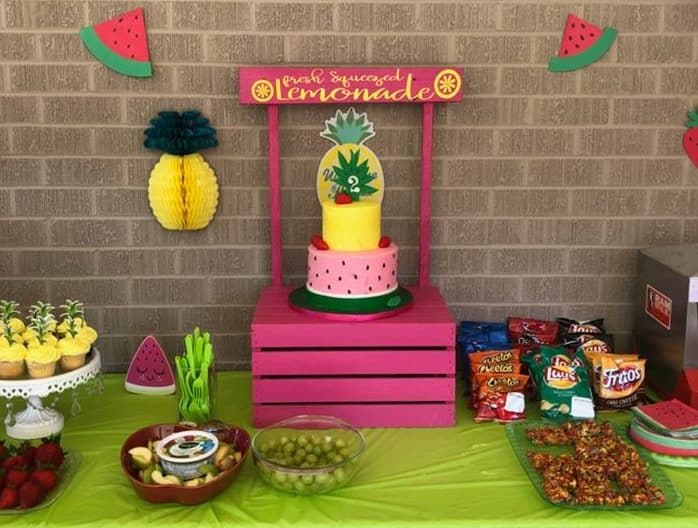 Her party was SO adorable and the cake held up incredibly well!  YAY!!  What a relief 🙂

Now - here are a few details about the cake. 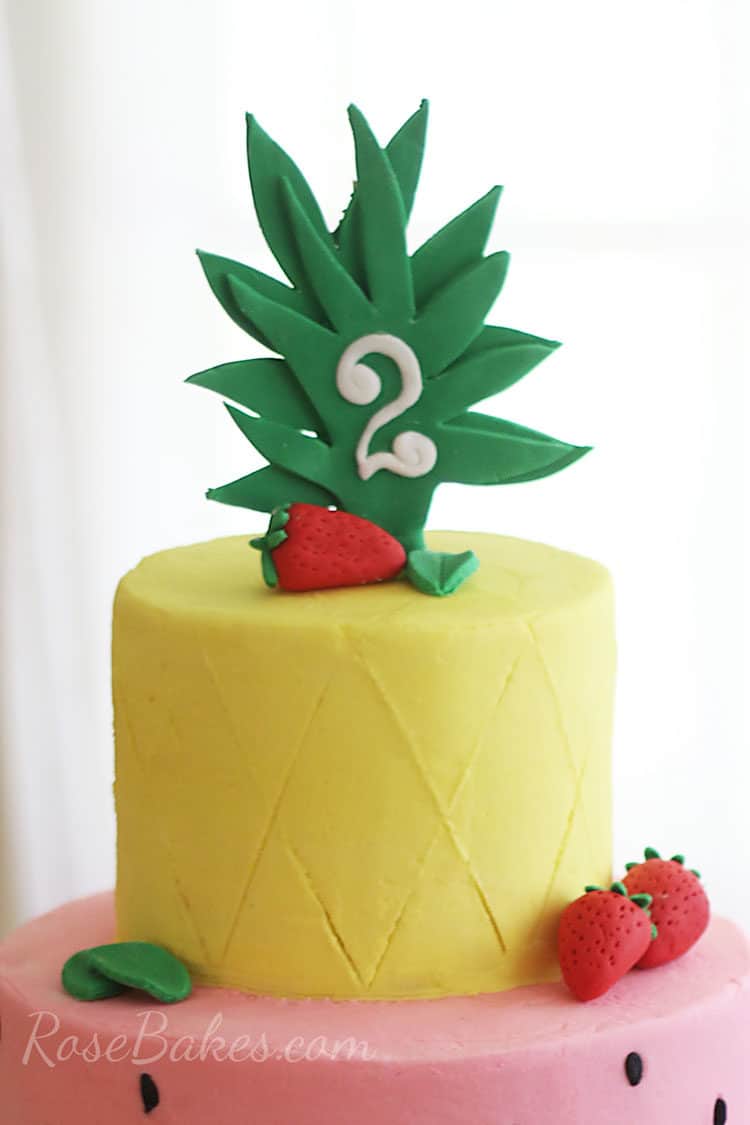 And that's all I've got for you, I think!  Do you have any questions? Leave me a comment! Also, check out my other summery cakes & cupcakes below 🙂 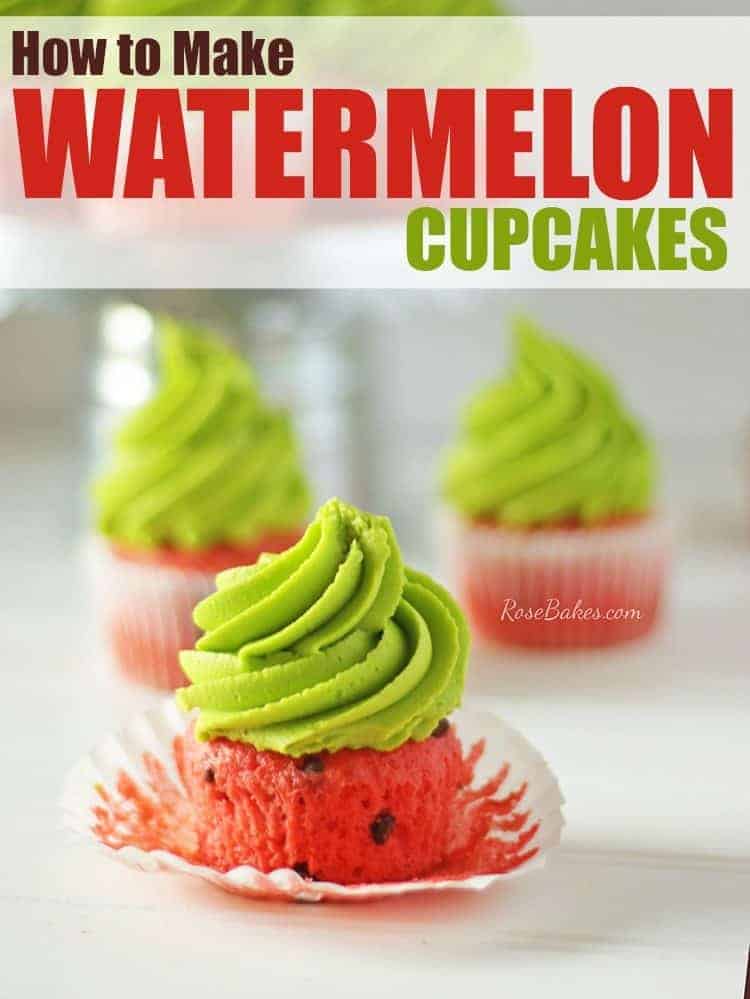 How to Make Watermelon Cupcakes 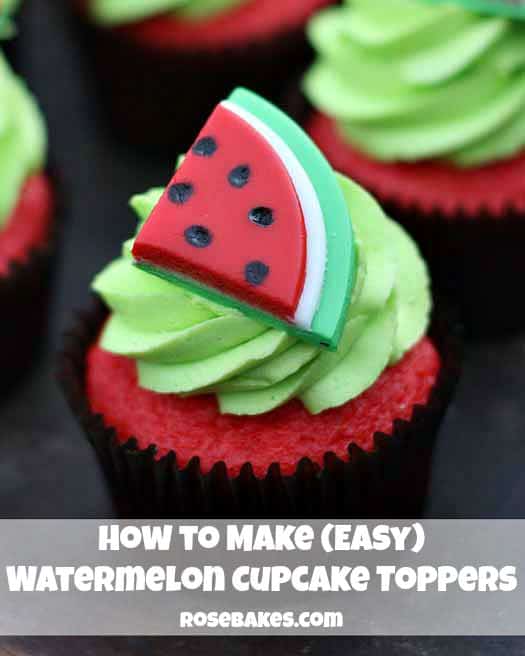 How to Make Watermelon Cupcake Toppers 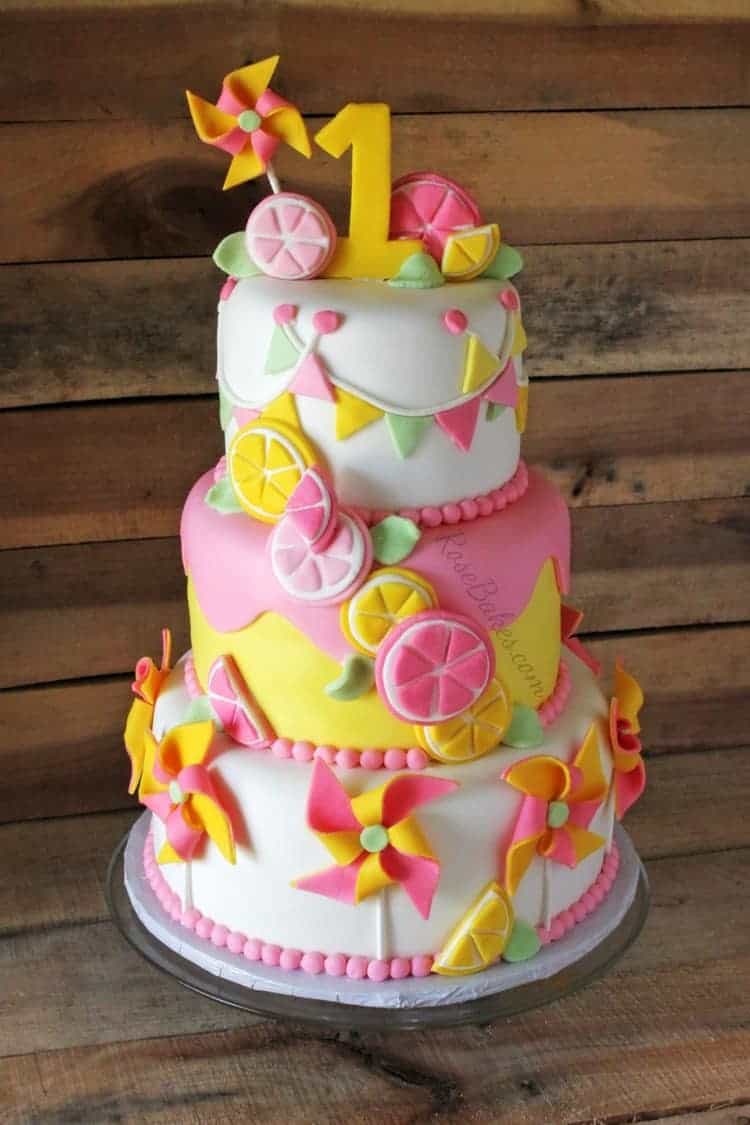 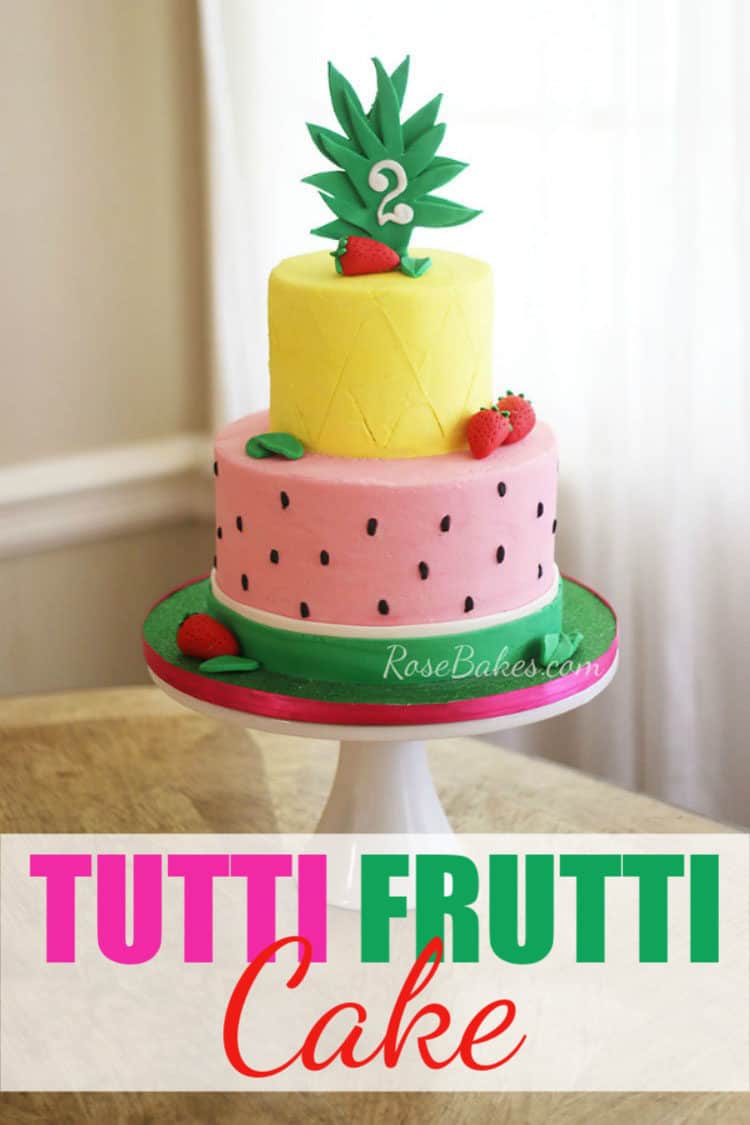