Today I want to share with you why I switched to a Bosch Mixer (from Kitchenaid) and how I've never regretted that decision.

Note: this post is not sponsored. I simply woke up today and decided that after 4 years of using (and loving) my Bosch, I needed to share my secret with you.  I shyed away from it for way too long because so many bakers and cake decorators are infatuated with Kitchenaid and I didn't want to offend anyone.

But I'm over it.  Bosch Mixers are incredible and if you want to step up your game, you need this mixer.

Having said that, I am a Bosch affiliate and if you click through one of my links and make a purchase, I will earn a small commission at no additional cost to you. 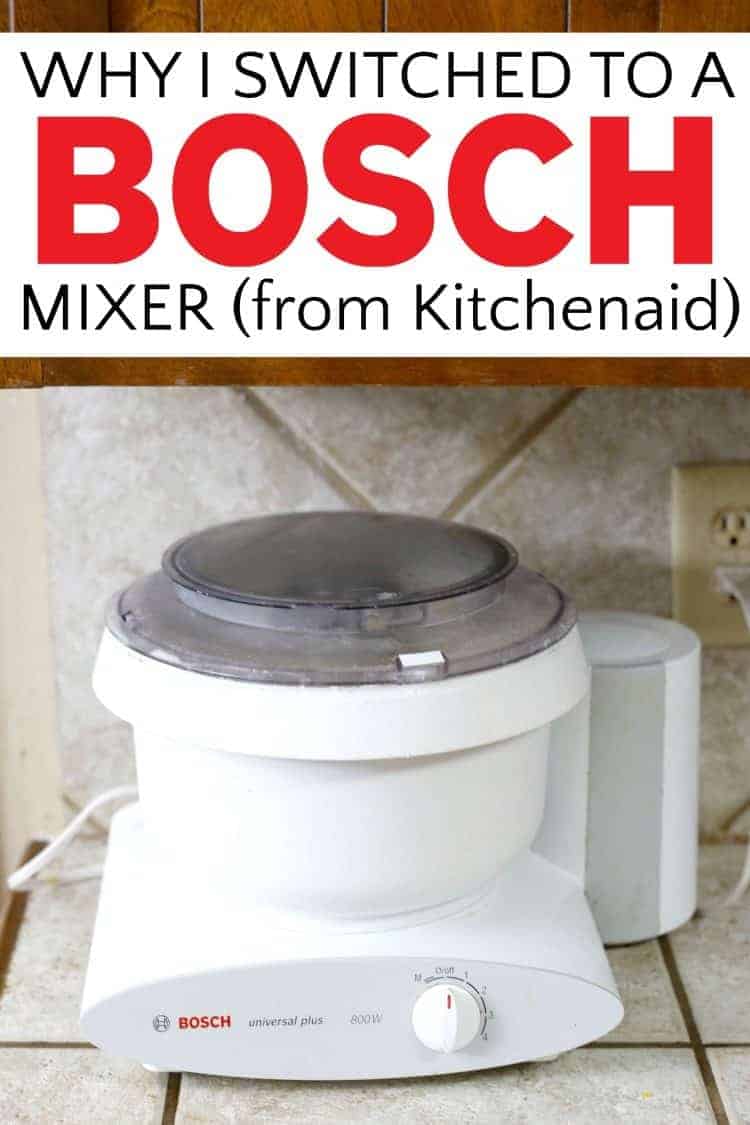 Let me start by saying I'm not a full-on Kitchenaid hater. I have a 15 year old Kitchenaid Mixer that I completely adore.  It was as gift from my hubby's grandfather back in 2003. He said he thought I had potential to have a cake business so he sent it to me out of the blue as a surprise.

I think he was right 🙂

It was my first Kitchenaid and it means the world to me. It has never given me a minute's trouble and I still use it for certain recipes, including every time I make my royal icing or homemade ice cream.

And honestly, the current Kitchenaid mixers are probably fine for the typical home baker who will use it occassionally.  They're certainly pretty and versatile and come with a lot of different options.

More than anything - they're so pretty.  But in my experience, they are not built for daily, repeated use and "pretty" won't fix that.  Or at least they weren't when I owned my last new one several years ago.

One other note - my counters and cabinets in this new house are hideous. I know this. But since I like to be real with ya'll, I'm sharing.

I took these mixer pics in my current ugly Kitchen so you'd have an idea of how it fits on my counter.  Also, the bowl is full of buttercream from the video below, so it's not as clean and shiny as it could be 🙂

Why I switched to a Bosch...

So here's my story.  Back when my cake business was new, and growing by leaps and bounds, I was baking all the time and I was using my mixer several times a week.  That's when I decided I needed a newer/bigger mixer.

After looking at all the models available at the time, I upgraded and got at Kitchenaid Professional 600.  The bowl was significantly bigger than my small 4.5 quart bowl and it was a beautiful mixer.  I can't remember the exact time-frame, but sadly, within months, the gears were stripped and it had quit working.  I had to file a warranty claim (it was under a year old).

Kitchenaid sent me a new one without question.  But shortly after that (maybe another few months), the same thing happened again.  Let me say here - I was only making buttercream and cake batter in it. I wasn't doing anything "hard" on the gears - like cookie dough or fondant making.

The plastic gears on the inside were just not holding up.  I filed a second claim but I guess at some point in the conversation, I mentioned my cakes and a note was made in my file.  So, when the gears stripped out the third time within 2 years, Kitchenaid refused to replace it again.

Apparently the "Professional" model is not actually meant to be used by a professional and my use of it in a "business environment" voided the warranty. I was mad to say the least.

And disappointed. My old Kitchenaid (the one I still have from Grandpapa) continued to work beautifully making batter and buttercream all the time.  It wasn't big enough for my doubled batches, but it was certainly better built.

That is when I went searching for an alternative to a Kitchenaid that had a bigger capacity. I didn't have the space or need for anything as big as a commercial mixer, but I wanted something more reliable.

Why the Bosch Mixer won!

That's when I stumbled onto Bosch mixers. I researched and studied and finally bit the bullet and decided to give up on my beloved Kitchenaid and try a Bosch.

Bosch was not a brand I'd ever heard of before I started looking, but the information I found about Bosch mixers convinced me.

I was nervous about the change, but I swallowed my fear and bought a Bosch Universal Mixer with a 6.5 quart bowl.   That was 2 years and 4 months after buying my first newer/bigger Kitchenaid.  And three of them had broken in that time.

Ya'll.  I have never made a better decision.  It took some getting used to initially after using a Kitchenaid for so long, but now I wouldn't trade my Bosch for all the Kitchenaid's in the world (except for maybe my old one... still love that mixer!). 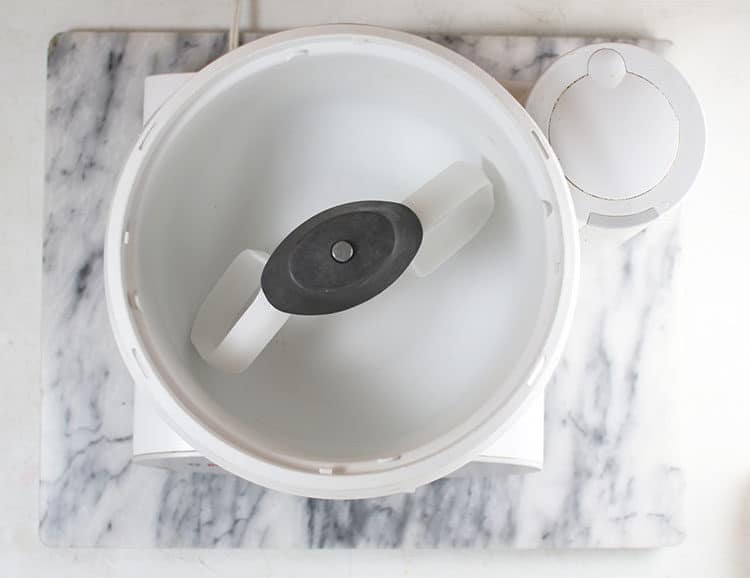 It's short enough to slide under my top cabinets (my Kitchenaid is NOT) and the footprint is not all that big. In the pic above, it's sitting on my 11x14 marble slab from Williams Sonoma ... you can see how much smaller it is than that.

My most favorite, favorite thing of all is being able to close the bowl and seal it completely while mixing. No more powdered sugar clouds in my kitchen when I'm making buttercream.

No more splattering or spilling.  I put all the ingredients in - close the lid - and mix away!  It's a beautiful thing.  Also, a lot of people seem to think it's so much bigger than a Kitchenaid - but it's really not!

I recently did a batch of buttercream in mine on video so you could see what I mean :

Having had my Bosch for many, many years now, I've used it thousands of times and I thought I'd give you a list of my favorite (and least favorite) features of this mixer. 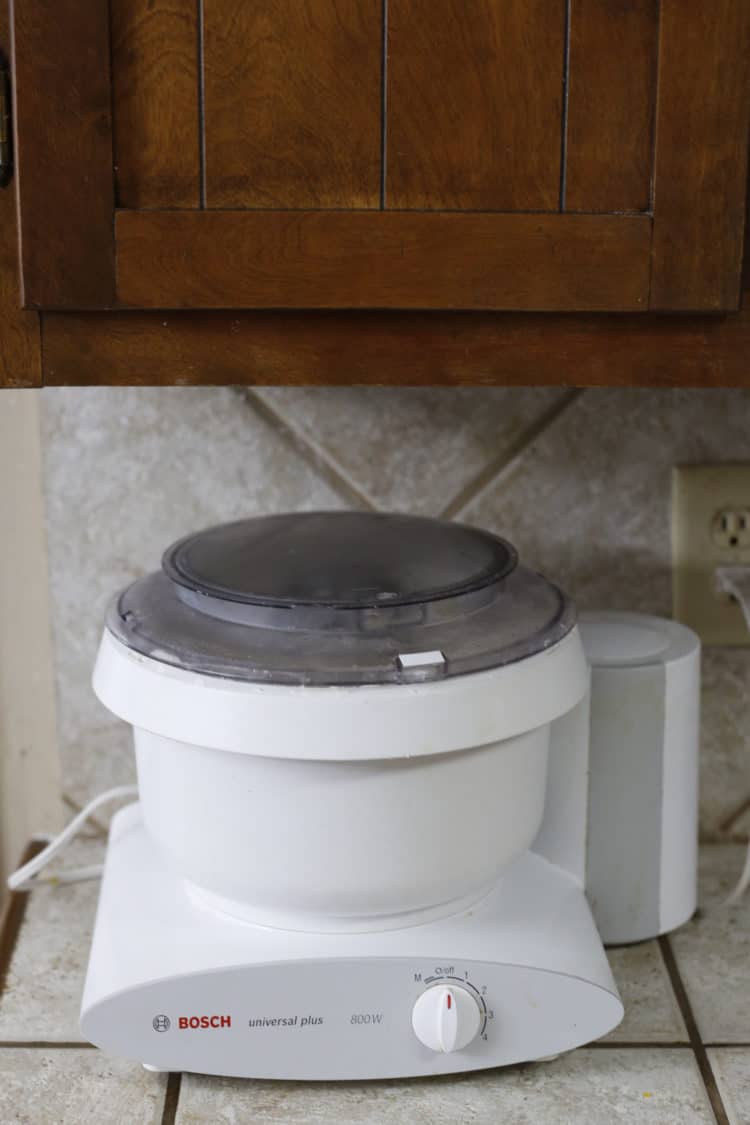 To wrap things up - Bosch Mixers are awesome!! That's really all I'm trying to say here.  If you need a new mixer, think outside the Kitchenaid box and give Bosch a shot!

**If you're looking to buy a Bosch - check out the current sales and bundles here!

I'd love to hear from you!  What do you love/hate about YOUR mixer?  Any Bosch users out there?

UPDATED:  A reader asked on Facebook so I'm adding a short video showing how the attachments come apart from the bowl. You can also remove the center post from the bottom of the bowl to clean all the parts really well and they ALL go in the dishwasher!

« Easy Mango Icee Recipe
Excavator Cake (the one that got flipped over in my car!!) »