This Easy Homemade Vanilla Ice Cream is delicious and can be ready in as little as 30 minutes. There are only 3 ingredients - no eggs and no cooking required! It's soft and creamy and a delightfully simple dessert.

A couple of weeks ago when all of this started (you know what this is, right?), my kids were asking for ice cream. We didn't have any, and I refused to go buy any, so I ended up making this Easy Homemade Vanilla Ice Cream Recipe in my Bosch Mixer. And it was perfect.

This ice cream only has 3 ingredients and it reminded me of that Plato quote, "necessity is the mother of invention." We needed ice cream (haha!), so we invented a new recipe with ingredients we had on hand.

Every recipe I read called for whole milk and/or heavy cream. I didn't want to use up all of our milk (since I'm shopping as little as possible) on and I didn't have heavy cream.

But what I did have was an entire gallon of half & half. Funny thing is, I don't drink coffee and my husband doesn't add half & half to his coffee. So I have no idea why I bought it.

I'm sure I originally bought the half & half for some recipe I wanted to try. Sadly, I can hardly remember anything that was going on before the world changed. But there it was, taking up space in our extra fridge. It wasn't expired and we don't use it for anything normally, so it was fair game for ice cream making.

After initially getting the kids' hopes up, I panicked when I remembered that we no longer have a traditional ice cream machine. Some part of it was lost before we moved so I tossed the remaining pieces when I found out that parts were more expensive than replacing the whole thing.

Except I never did that either because we just don't make a lot of homemade ice cream. Things were not looking good. But then I thought of my beloved Bosch mixer.

And the Bosch Ice Cream Maker attachment. I have used it a few times before to make ice cream (see this OREO Cookies & Cream Ice Cream... YUM!), but it had been a while and I don't think I'd ever made a simple vanilla ice cream recipe. 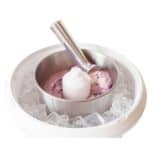 Then just mix up the three ingredients and pour them into the bowl. Put the lid on and within 20 minutes... ICE CREAM!

We absolutely love this ice cream straight out of the mixer. It's soft and creamy and sort of like a milkshake consistency. But if we don't eat it all at once, we freeze the extra and it becomes a more "scoopable".

Love ice cream? Check out these other recipes:

Granted, this is not full-fat ice cream so it's not as creamy as most store-bought ice creams are, but that does not make it any less delicious! We ended up making two batches that day and both were gone within 24 hours.

You could also substitute whole milk or heavy cream for the half & half (or a mixture of the above). Just keep in mind: milk will make it icier, cream will make it... creamier 😉 and half & half is somewhere in between.

Are you ready for the recipe?

This Easy Homemade Vanilla Ice Cream is delicious and can be ready in as little as 30 minutes. There are only 3 ingredients - no eggs and no cooking required! It's soft and creamy and a delightfully simple dessert.

No machine? Pour the mixture into a freezer-safe container and place in the freezer. Stir every 2-4 hours once  it begins to freeze. ice crystals form.